The Queen Victoria ‘Jubilee Issue’ of British postage stamps, issued between 1887 and 1900, is really a misnomer because the set was actually planned from 1884. The fact that the first 12 stamps came out on 1st January 1887 - the year of Queen Victoria’s golden jubilee – was fortuitous.

The previous issue of stamps, the 1883-4 lilac and green series, was not popular with the public because the colours were dull. Postal clerks did not like the fact that postmarks often covered the denomination and, as several different denominations were of the same colour and fairly similar in design, it was difficult to know that the correct denomination stamp had been used on the envelope.

As a result, the Post Office decided to replace the entire Queen Victoria stamps series with issues of different colours for each denomination and some were to be printed in two colours – the first ever bi-coloured British stamps.

The resultant series represented a considerable break with tradition and must have appeared very modern and colourful. Coinciding with the Queen’s jubilee, it quickly became known as the Jubilee Series. 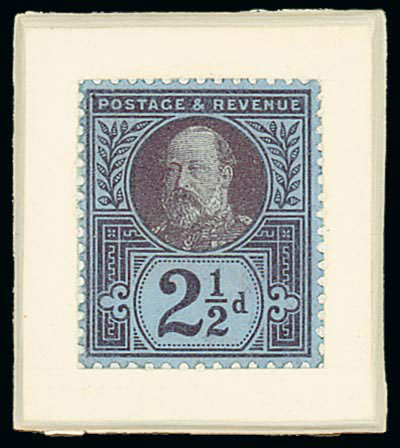 In November 2010, I visited a client in Wolverhampton who showed me a superb specialised collection of these issues including proof material and covers.

Regrettably, the collection was not for sale as the gentleman who owned it was still adding to it and hoped to competitively exhibit it at some stage in the future. However, I was able to tell him about an item coming up for sale in our 1st December 2010 auction, which could be sensibly added to his collection.

Before I explain its nature and how much it realised, a bit of background is first required to set the scene.

In 1901, Queen Victoria died after a very long reign and the Post Office immediately set about the planning of replacement stamps which would depict the head of the new monarch, Edward VII – Queen Victoria’s son.

Back then, it was not the policy of the Post Office to issue stamps as frequently as they are issued nowadays, but nevertheless a new series would be deemed essential upon the death of a monarch. De la Rue were the printers being used by the Post Office at the time and one of the ideas they put forward was to replicate the designs of the ‘Jubilee Issue’ and simply replace the head of Victoria with that of Edward.

The item which was being vended in our 1st December 2010 sale was a ‘paste-up’ of a stamp essay, a design which would have been submitted to the postal authorities for consideration.

Essays are generally rather rare, because so few are usually produced. But they do sometimes find their way onto the philatelic market – despite being intended for internal use by printers and official bodies.

This particular essay consisted of a Jubilee 2 ½ d value with the portrait of Victoria cut out and replaced by a ¾ face lithographed portrait of Edward VII. It was mounted on a small card with bevelled edges.

All of the Queen Victoria Jubilee stamps were treated in this manner, as was the 1d lilac in 1881.

Personally, I think the resulting design is quite attractive and, dare I say it, better than the stamps which were eventually issued. The paste-up realised £3,450.

If you have a stamp like this in your possession which you’d like to sell, or you wish to acquire one, please get in touch for expert assistance.