How Postcards portrayed the Genesis of Motor Racing

A wonderful collection of picture postcards on the genesis of motor racing, part of the magnificent postcard collection formed by Karl Jaeger, was included in our auction on 21 January 2015.

The introduction of the picture postcard largely coincided with the start of motor sport in the western world. Privately produced picture postcards were permitted in this country from September 1894, though it was not until the divided back postcard was introduced in 1902 that production really took off. At the same time motor sport was in its infancy.

In 1886 Carl Benz began the first commercial production of motor cars with internal combustion engines, but there is no record of organised competitive motor sport until 1896, when the Liverpool Self-Propelled Traffic Association held a 'trial for self-propelled vehicles' on Liverpool's Everton Brow. There were timed trials for cars and motor cycles on the roads at Crystal Palace on 6th May 1899 and in June 1899 the Automobile Club of Great Britain and Ireland (which became the RAC) held General Efficiency Trials. However Bexhill, in Sussex, has always laid claim to having hosted the first motor race in Britain. In May 1902 the 8th Earl De La Warr, in conjunction with the Automobile Club of Great Britain and Ireland, organised motor races along Bexhill’s seafront. The Earl was attempting to make Bexhill fashionable and the motor race attracted thousands of spectators as well as over 200 entrants, including some from the continent. Speeds in excess of 50 mph were achieved, whereas the limit on the public roads was 12 mph. The 1902 race was a success and further races were held in 1904, 1905 and 1906. Other coastal towns copied the Bexhill model, notably Brighton. However the Brooklands track was completed in 1907 and this off-road circuit became established as the home of British motor racing.

Road racing, as opposed to track racing, became the speciality of the Isle of Man. In Britain, racing on the public roads was forbidden by Act of Parliament and by the introduction in 1903 of a 20mph speed limit. The Secretary of the Automobile Club of Great Britain and Ireland approached the government of the Isle of Man with the result that, in 1904, the Great Britain trial for the newly created Gordon Bennett races was staged on a 52 mile course of closed public roads. The following year motorcycle racing started on the day after the Gordon Bennett trial and these races led to the formation of the famous Isle of Man TT races.

In Europe the first major motor sport event was the 1901 Giro d'Automobile in Italy. The gruelling 16 day, 1650 km course started in Turin, took in Genoa, Rome, Florence and Bologna and finished in Milan. It incorporated timed sections and off-road races. Of the 72 entrants more than half had to withdraw on the first day because of torrential rain. The race was marred by the death of a spectator at Ferrara. The driver that collided with the 11 year old girl gave an amount of £1000 to her family and a further £500 to the poor people in the parish where she lived. The other competitors collected £2000, enough to build a kindergarten in the village.

Thirty cars completed the course and the winner was Felice Nazzaro, in a 3.8 litre FIAT 4 cylinder, at an average speed of 26.7mph.

In the U.S.A. a transcontinental endurance race for cars took place in 1905, crossing from the east coast to the west coast, using the Oregon Trail. There were only two competitors and both cars were 7 hp Olds Runabouts. They were the first cars to cross the continent and the first to cross the Cascades range. The race was a publicity event for the Department of Public Roads and the Olds Motor Company and the winners, Huss and Wigle received a prize of $1000. Their epic 44 day journey had been made more difficult by wet weather turning the tracks into mud baths and lakes. 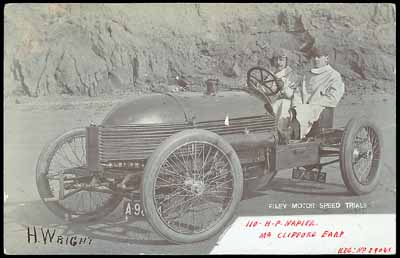 The Filey (East Yorks.) motor speed trials were held in 1905. This real photographic card by H. Wright depicts the 110 hp Napier car of Clifford Earp, who had previously been the winner at the 1905 Brighton trials. The message on the reverse states 'I am sending you a photo of one of the cars that ran on the Filey sands at 90 miles per hour. Which do you prefer a motor or a good horse?' 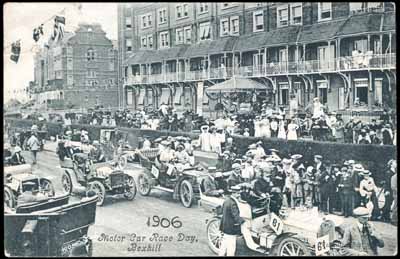 Printed card of the 1906 Bexhill speed trials and motor races. The Bexhill trials were social and elegant events organised to publicise the seaside town. 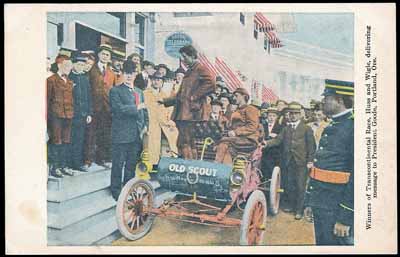 Unused, tinted, printed postcard of “Old Scout” and its drivers, Huss and Wigle, who were the first to cross the USA by car, in 1905. They are pictured handing a message to President Goode, in Portland, Oregon. 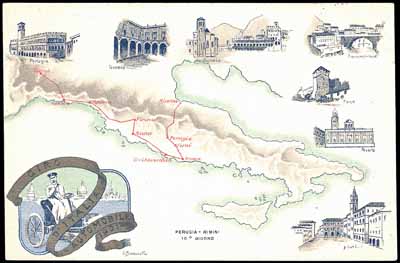 The organising committee of the Giro d’Italia in Automobile 1901 published a series of picture postcards commemorating the event, including a series of day cards with route maps and vignettes, drawn by C. Biocaretti and printed by Fratelli Stoppani of Milan. Each card bore a handstamp of the organising committee on the reverse. This particular card commemorates the day 10 stage of Perugia –Rimini. 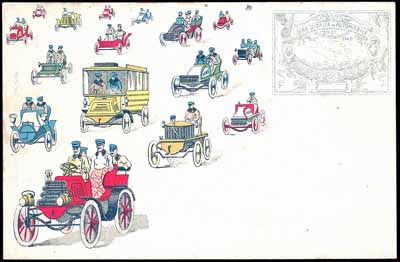 The organising committee of the Giro d’Italia in Automobile 1901 also published this chromo-litho vignette card showing some of the competing vehicles, with the race cartouche top right. Again the handstamp of the committee is on the reverse. 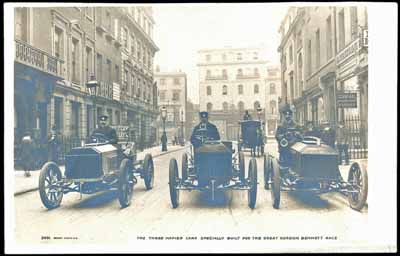 This superb real photo view by Rotary has a divided back and is captioned “The three Napier cars specially built for the great Gordon Bennett race”. The location is not stated but it is probably London. 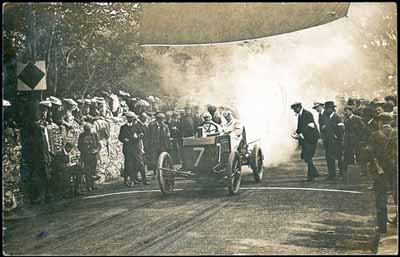 The Isle of Man was the location for the British trials of the Gordon Bennett races, after on-road racing was banned on the streets of Great Britainin 1904. This card is postmarked in 1905 and depicts the Earp brothers winning the 1905 race. The 1905 Brighton speed trials winner was also Clifford Earp in a Napier 90 hp. 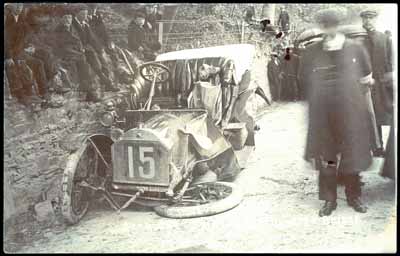 Accidents were common during the Isle of Man Gordon Bennett trials, and here car no. 15, a Star, has crashed at Quarter Bridge, probably in the 1905 race. The card has a divided back and it is unused. 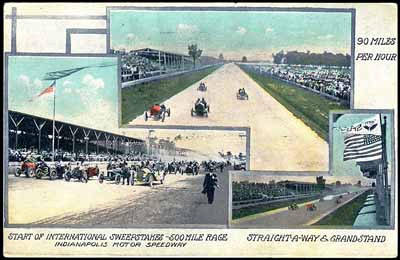 The Indianapolis speedway was constructed by Carl G. Fisher in 1909, after visiting the Brooklands circuit in England. The Indianapolis 500 race was called the International 500 Mile Sweepstakes Race, from the first race in 1911 until 1916. This printed card by Hoover-Watson Printing of Indianapolis dates from that period. 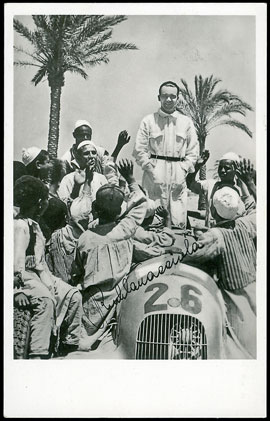 The Mercedes “Silver Arrows” dominated motor racing in the 1930s. One of their most successful drivers was Rudolph Caracciola, a German born in 1901. He won the European Drivers’ Championship, the pre-1939 equivalent of the Modern Formula 1 Championship, 3 times. This real photographic card of his victory in the 1935 Tripoli (Libya) Grand Prix was a promotional card published by Mercedes Benz. Caracciola’s signature is a photographic copy.