Imprimaturs from the 1984 and 1985 National Postal Museum Sales

Imprimatur is a word used by printers to identify a proof of a document (or in this context a stamp) they are seeking permission to print. The word comes from the Latin, meaning let it be printed. The Royal Mail Archive includes a large number of such imprimaturs and in 1984 and 1985 the National Postal Museum, at that time the curators of the Archive, decided to auction a quantity of material they deemed to be duplicated and surplus to requirements. At the time, concerns were raised about selling the family silver and many thought, me included, that the curators should act as custodians and conservators, retaining all the material in trust for future generations to study and enjoy. The first auction, which took place in April 1984, was restricted to G.B. and G.B. overprinted Colonial issues of the reigns of King EdwardVII to King George VI and included regular issues overprinted SPECIMEN as well as imperforate imprimaturs.

The two subsequent sales concentrated on the pre decimal issues of Queen Elizabeth II and the sale held in February 1985 included a range of commemorative imprimaturs. The imprimaturs were the first stamps printed from the cylinders and, apart from being imperforate, they could not be distinguished from the issued stamps. The N.P.M. therefore decided to handstamp each item with the word Imprimatur and jssued with each a certificate of provenance. It would then be easy to differentiate between these proofs and regularly issued stamps, imperforated in error.

It had obviously been the intention of the N.P.M. to hold further auctions of imprimaturs, as a table of availability, printed inside each auction catalogue, showed the total number of similar items they intended to sell over a 10 year period. The fact that only three sales were ever held has meant that the total number of N.P.M. imprimaturs available to collectors is substantially less than was imagined by the initial buyers in the mid 1980s and the result is an explosion in prices. 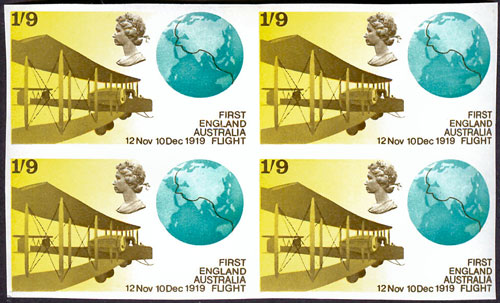