Is this a Previously Unknown Notice to Postmasters? 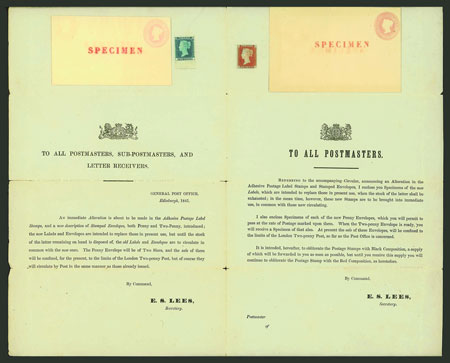 The 1841 Notice to Postmasters, concerning the new issue of postage stamps and postal stationery. Warwick and Warwick sold this item in their November 2006 auction for £3,680.

When the Post Office first issued stamps, in 1840, and again when the 1d. red replaced the 1d. black, in 1841, the Secretary  to the Post Office would send out a circular to all the postmasters, informing them of the change and attaching samples of the new issue. An 1841 Notice, bearing samples of the new 1d. red and 2d. blue (with void corners), together with the new postal stationery, was auctioned by Warwick and Warwick in theirNovember 1st2006auction, where it realised £3,680, including the buyer’s premium.

However, uniform penny postage, introduced as part of the Rowland Hill reforms, became law on January 10th 1840, four months before the 1d. black and the Mulready stationery were ready. The postmasters and public needed informing of this important change and the fact that the cost of the conveyance of inland letters was no longer determined by the number of sheets, the distance and the route. A Notice to Postmasters was printed, on the authority of the Post Office, dated January 7th 1840, by the London printer, J.Hartnell and an illustration of it appears in the book “The British Post Office from its Beginnings to the End of 1925”, by C.F. Dendy Marshall, published in 1926, and this notice, although extremely rare, is well documented elsewhere. 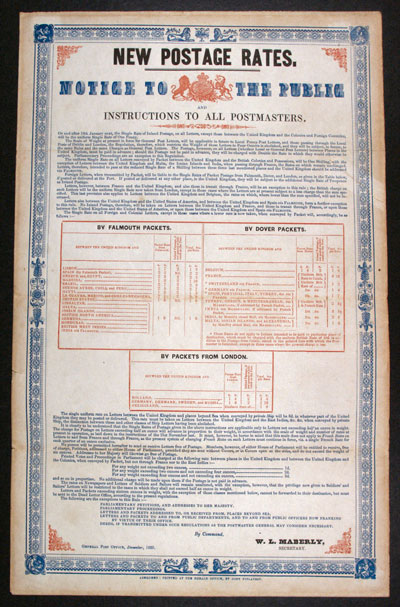 Warwick and Warwick have discovered a notice, concerning the introduction of Uniform Penny Postage, other than the one referred to above and wonder if anyone has any information about it. It is printed in blue, red and black, in letterpress, on unwatermarked paper, 24 cm. x 41 cm. The printer’s imprint states “Aberdeen: Printed at the Herald Office, by John Finlayson.” It is headed “NEWPOSTAGE RATES. / NOTICE TO THE PUBLIC /AND/ INSTRUCTIONS TOALLPOSTMASTERS.” The text of the first two paragraphs is as follows:

On and after 10th January next, the Single Rate of Inland Postage, on all Letters, except those between the United Kingdom and the Colonies and Foreign Countries, will be the Uniform Single Rate of One Penny.

The Scale of Weight at present in force for General Post Letters, will be applicable in future to Local Penny-Post Letters, and those passing through the Local Posts of Dublin and London, the Regulation, therefore, which restricts the Weight of these Letters to Four Ounzes is abolished, and they will be subject, in future, to the same Rules and the same Charges as General-Post Letters. The Postage, however, on all Letters (whether Local or General-Post Letters) between places in the United Kingdom, must be paid in advance; should the Postage not be paid in advance, they will be charged with Double the Rate to which they would otherwise be subject. Parliamentary Proceedings are an exception to this regulation.

There then follows several paragraphs concerning the rates for Packet letters and Private Ship letters and tables of rates for Packet letters via Falmouth, Dover and London. The number of different rates quoted for the various routes and destinations is very confusing and it is not surprising that one often sees mail with corrected charge marks. The notice ends By Command, W.L.Mabberley, Secretary, General Post Office, December, 1839.

The notice is on white paper and the back is toned with age, probably as a result of being adjacent to a backing paper, in a glazed frame. Interestingly, proving its antiquity, several small edge tears have been repaired, on the reverse, with stamp selvedge, some of which bears the watermark “PO” of “POSTAGE” and a colour bar, found on stamps from the Queen Victoria Jubilee issue to those of the reign of George V.

The fact that the printer of this notice was inAberdeenshould not be viewed as unusual, as there is evidence of notices being printed in bothLondonand inScotland. Indeed, the 1841 notice, sold by Warwick and Warwick in November 2006, was printed inEdinburgh.

If anyone has any information on this unusual item Warwick and Warwick would like to hear from them.