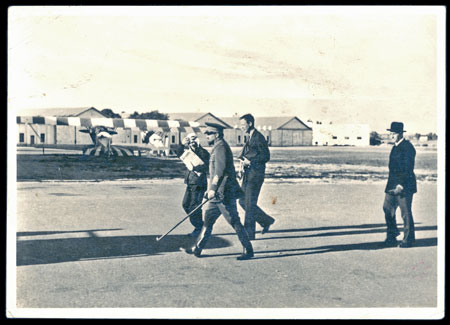 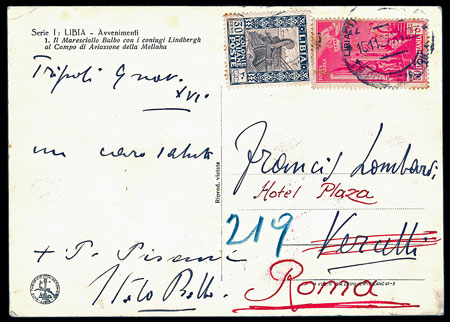 An interesting postcard featured in the Warwick and Warwick auction in September 2014. It was an Italian printed card from the Italian Colony of Libya, addressed to Italy and franked with Libyan adhesives with a cancellation dated November 10th1937. The picture side depicted Marshal Italo Balbo and his aviation colleague, the American Charles Lindbergh, at the aviation ground at Mellaha, Libya. What made the card particularly rare and interesting was the fact that it had been written and signed by Marshal Balbo.

Italo Balbo was born in 1896 and joined the Italian Fascist Party in 1921, becoming Minister of Aviation in 1929, in Benito Mussolini’s government. In his quest to makeItalya significant air power, he personally piloted aeroplanes across the North andSouth Atlantic, in the days when piloting a single-engined aircraft across theAtlanticwas seen as a challenge. Promoted toItaly's first Air Marshal in 1933, Balbo decided to create a mass formation flight to visit the 1933 Century of Progress Exposition inChicago. The 24 11-ton seaplanes in the formation flight provided a demonstration of aerial prowess that made him a hero inChicagoand captured the attention of the world. On their arrival in Chicago they had completed seven legs of a flight that in total had taken three weeks, from their base at Orbetello (north of Rome), via Amsterdam, Londonderry, Reykjavik, Cartwright (Newfoundland), Shediac (Nova Scotia) and Montreal.

Only 20 of the 24 aeroplanes carried mail and an issue of stamps was made to frank covers carried on the flight. The format was 2 se-tenant triptychs of registered air express label / ordinary postage / airmail postage, one with the airmail postage rate of 19,75 L (Europe) and the other with the rate of 44,75 L (North America). Additionally the registered label was overprinted with an abbreviated form of the name of each of the pilots whose aircraft was carrying mail, making a total of 40 different triptychs available to be collected, issued in 2 sheets of 20. TheWarwickandWarwickauction in July 2013 contained the complete set in 2 sheets and they realised £950 + 15% buyer’s premium. A total of 180,000 sets were issued. Additionally 5,000 of the North American rate triptychs were issued with an official airmail overprint for use on official mail carried on Marshal Balbo’s plane and these are rare.

25 panes of 20 of the North American rate triptych were also prepared for the return flight, with a relevant overprint, but due to time constraints they were never issued. This stamp is of course a howling rarity.

After Balbo’s return home toItaly, Mussolini became worried that Balbo was a threat to his own leadership and moved him to the backwater ofLibyato become Governor of the Colony. Balbo remained a prominent figure in the world of aviation and was admired by other pioneer aviators of the period, such as the American Charles Lindbergh.

In February 1937 Charles Lindbergh and his wife were visitingRomeon a flying visit fromEnglandtoEgypt. Balbo used the fact that he was attending a wedding inRometo meet the Lindberghs and invite them to spend some time with him inTripoli, before completing their flight toCairo. The postcard in theWarwickandWarwickauction recorded the meeting inLibya. Balbo obviously acquired a supply of the cards for his personal use and this card was not posted until November, 9 months later.

Balbo advised Mussolini against siding with Hitler in the approaching war, but he resigned himself to the inevitable and became commander of Italian troops inNorth Africa. OnJune 28th1940he and members of his family were shot down over Tobruk by Italian anti aircraft fire, apparently by mistake. However many believe that Mussolini ordered his assassination.