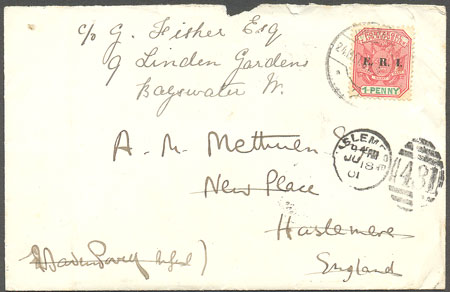 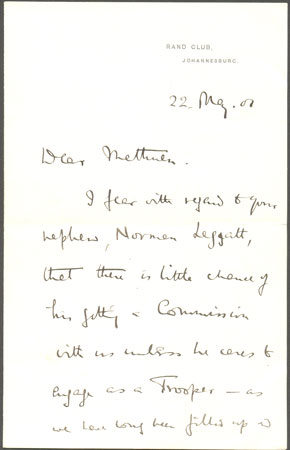 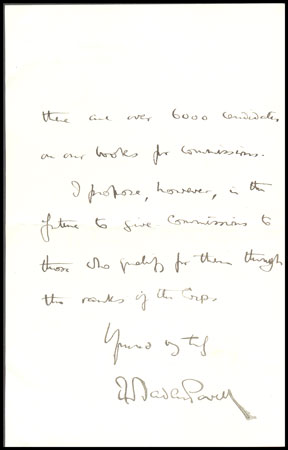 An interesting item in our August 2011 philatelic sale was a letter written by Robert Baden-Powell on May 22 1901, on notepaper headed Rand Club, Johannesburg. He is writing to A.M. Methuen of Haslemere, Surrey, about his nephew Norman Leggatt, who is hoping for a commission in the army. Baden-Powell says that his application is unlikely to succeed as “there are over 6000 candidates on our books for commissions.” The letter is accompanied by its envelope, also in the hand of Baden-Powell, bearing his signature lower left. The envelope has been forwarded from Haslemere to Bayswater and in doing so the forwarder has stuck through the signature. The person to whom he was writing was Lord Methuen who was one of the commanders of the British Army inSouth Africa. It was Lord Methuen who commanded the British forces at the Battle of Modder River. This battle although technically a success for the British forces resulted in 70 dead and over 400 wounded and was the first major setback suffered by Lord Methuen during the first attempt to relieve the siege ofKimberley. Lord Methuen was unprepared for the battle and lacked leadership experience.

Baden-Powell’s major achievement in the Boer War was the successful conclusion of the siege ofMafeking, where the force he was commanding in the town was surrounded by an army of 8000 Boers. Although wholly outnumbered, the garrison withstood the siege for 217 days, thanks largely to the military deceipts organised by Baden-Powell, such as false minefields.Mafekingwas finally relieved on May 17th1900 and overnight Baden-Powell became a hero inEngland.

Also in the same sale were 2 copies of the broadsheet “The Mafeking Mail”, dated November 7thand November 9th1899, which made fascinating reading. These papers were printed by Townsend and Son, who also were authorised to print stamps of Col. Baden-Powell and Sgt. Goodyear from photos taken by Dr. D. Taylor. These 1d and 3d stamps were intended for use on local mail within the town of Mafeking. What a shame that the envelope Baden-Powell used did not bear a stamp with his own image, though clearly had this been the case, it would be classed as a “par complaisance” cover.

The other major achievement of Robert Baden-Powell, as everyone knows, was the formation of the Boy Scouts organisation in 1908. This followed the first Scout Camp on Brownsea Island in Poole Harbour in 1907. The fact that there are collectors of Scouting stamps as well as collectors of Boer War material adds to the attraction of this rare signed letter and cover. The auction realisation was £448.