Louis Blériot and his Cross-Channel Flight 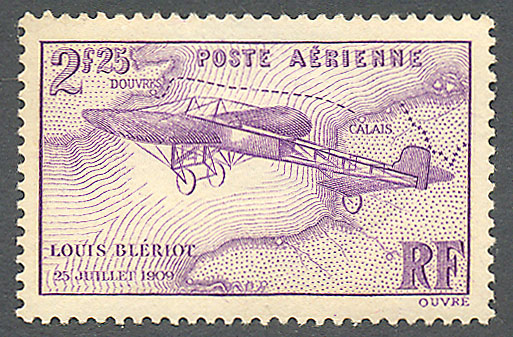 This stamp, issued by France, in 1934, commemorates the 25th anniversary of Louis Blériot’s first crossing of the English Channel in a heavier than air machine. The flight took place on July 25th 1909, only 6 years after the first ever heavier than air flight by the Wright brothers in U.S.A. It was the result of a competition held by the “Daily Mail” for the first powered flight across the Channel, the prize for which was £1,000, a great deal of money in those days. There were 3 entries. Hubert Latham’s attempt on July 19th resulted in a record, but not the one being competed for. His was the first aircraft to ditch in the sea. The second competitor was Charles de Lambert and he was forced to withdraw following an accident. Louis Blériot, in an aeroplane of his own design, took off from near Calais and after a flight which lasted 37 minutes crash landed, in poor weather, near Dover. He won the prize and became an overnight celebrity. 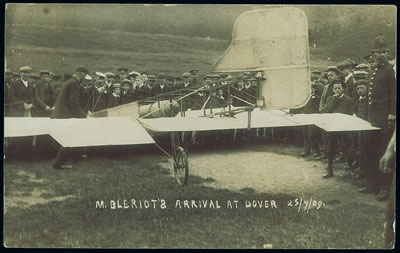 A celebratory banquet, at Princes’ Restaurant in Picadilly, was held in Blériot’s honour, on July 26th and in July 2011 Warwick and Warwick sold a menu from this dinner. Autographed by both Blériot and his wife. It realised £483. 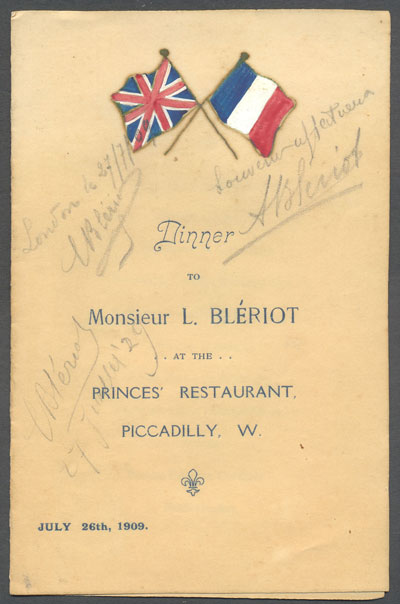 1909 menu for a celebratory banquet at Princes’ Restaurant in Picadilly, held in Blériot’s honour, signed by Blériot and his wife and signed again by Blériot, 20 years later, when he was attending the Seventh International Aero Exhibition.