When Rowland Hill introduced uniform 1d postage in 1840, he initially thought that the vast majority of correspondence would be on postal stationery and that few people would want to use their own notepaper and envelopes and buy stamps to affix to them. The Lords of the Treasury organised a competition, open to everyone, to design suitable stationery and postage stamps. Despite a large number of entries, it was felt that none of the designs submitted was suitable and William Mulready was commissioned to design letter sheets and envelopes representing the 1d and 2d postage rates. The resultant design was allegorical and featured Britannia in the centre despatching winged messengers to the colonies, represented by people in native costumes and exotic animals. Hill approved the design and stated that its use would be beneficial “facilitating our friendly and commercial intercourse with remote lands and bringing, in a manner, our separated brethren closer to the sick beds and cheerful firesides of home”. However, the public, egged on by the politically motivated Times newspaper disliked and derided Mulready’s design. A Times editorial included “We have been favoured with a sight of one of the new stamp covers, and we must say that we have never beheld anything more ludicrous than the figure or allegorical device by which it is marked with its official character...”

Before the end of May 1840 caricatures of the Mulready stationery were being produced by stationers and used by the public. As they were not valid for postage, as were the Mulready envelopes and lettersheets, the public had to affix an adhesive stamp in order to use them. A good range of caricatures was produced and their study and collection forms an integral and entertaining part of the story of the 1840 postal reforms. Many of them are very rare and most are valuable, especially when used. 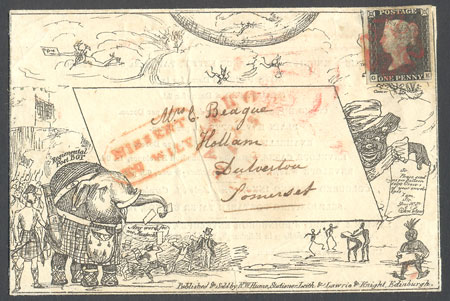 We sold several rare examples of caricatures in our November 2011 auction, including Hume’s Comic Envelope number 3, depicting an elephant wearing a kilt! This is one of only 10 known and realised £3,910, including the buyer’s premium. Another is by John Menzies of Edinburgh, the founder of the chain of newsagents. Here the recipient is pictured on the reverse with postmen arriving with yet more letters to be added to the overflowing “unanswered” box. 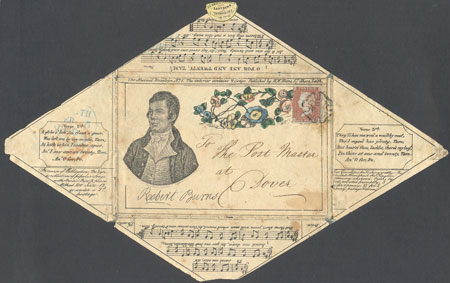 Although the attempt by Hill and Mulready to introduce art to stationery was frustrated by the caricaturists, it did give rise to the Victorian illustrated envelope, which swiftly followed on from the caricatures. In the same auction was an envelope by Hume depicting Robert Burns, bearing an 1841 1d red, one of two such envelopes recorded. 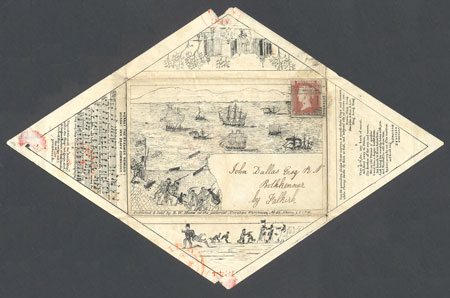 Hume also published his “Nemesis” envelope, recounting the celebrated paddle-steamer’s successful operation against the Chinese in the First Opium War. This envelope is illustrated both on the outside and on the inside, where it is delicately painted in watercolour. Although there exists a mint copy in the Royal Collection, we auctioned the only known used example and it realised £4,600.

Although Mulready’s designs were not appreciated at the time, philatelists have a lot to thank him for.