The WWI Distinguished Conduct Medal and 1914 star trio with date bar, awarded to 10223 Sergeant William Bradford, 2nd Highland Light Infantry, was sold in our June 18th 2008 auction, where it realised £3,795. 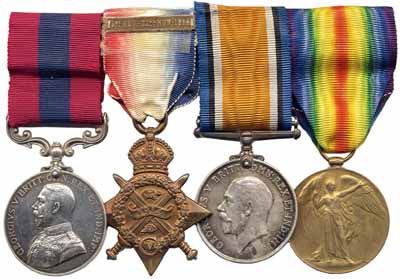 William Bradford of Canterbury enlisted early in the 20th century in the Highland Light Infantry. The first photo is of a group of soldiers in front of bell tents with the reverse endorsed "Irish manoeuvres, Moor Park, Aug 1909".

At the outbreak of the First World War he was serving with the 2nd Battalion Highland Light Infantry stationed in Maida Barracks, Aldershot and were part of the 5th Brigade, 2nd Division. The battalion were embarked on SS Lake Michigan and landed in France on 14th August. They were quickly moved forward and came under heavy shell fire on 24th August near Paturages suffering their first casualties with 14 wounded. The rest of August and September was spent retiring or advancing on an almost daily basis while the war was still in its fluid stages. Private G Wilson won the Victoria Cross during fighting near Verneuil on 14th September.

A letter from Corporal Bradford appeared in the Kentish Gazette of 5th December giving some particulars of his arduous experiences at the Battle of Mons, when he was in the trenches for 62 hours at a stretch under heavy fire.

The battalion arrived in the Ypres area on 16th October and became quickly involved in what was to become the First Battle of Ypres and the number of casualties increased at a rapid rate. Lieutenant W.L. Brodie won the Victoria Cross while helping to repulse a German attack on 7th November. The battalion was in the line at Polygon Wood on 11th November and acted as support to the attack on Nonne Bosschen Wood and suffered heavy shelling on the 13th with 12 killed and 23 wounded. The shelling continued again the next day with a further 18 killed, 31 wounded and 5 missing.

A Canterbury newspaper article in early 1915 believed the DCM was awarded to Corporal Bradford for action near Ypres on 14th November 1914 when “He had a very narrow escape then while on patrol duty and later, nearly the whole of a trench from which he was firing was blown up by shell fire. Bradford was buried by the fall of earth and the three men next to him were blown to pieces. The two officers were also killed.”

He wrote to his parents on New Year’s Day after being informed of the award of the DCM, “My Company Sergeant-Major has also been awarded the DCM. All the men – 13 in all – who were left in the trench with me have congratulated me saying I saved their lives by making them hold the position under an artillery fire which was nothing more nor less than murderous.” The DCM was announced in the London Gazette dated 1st January 1915.

When the battalion was pulled out of the line on 16th November they had suffered 346 casualties in November alone. They went back into the line at Richebourg St Vasst on 27th December. In the same letter home he wrote, “The weather during the whole of the time was very bad, it was very cold and we had a lot of rain. The first night I was put in charge of an advanced post, with six men, quite near to the German trenches. To go to this post we had to go through a small trench and we were up to our knees in mud and water; we all got smothered from head to foot in mud, and when returning last night, I must say we looked pretty objects. On the morning of the 30th, at daybreak, I spotted a German running across a trench, so I waited for him coming back to have a snipe at him. I think I caught him all right, as he fell down quick enough. I expect he thought we were not good shots. I am proud to say that my regiment has not lost an inch of ground during the whole of the war. We have officers whom anyone should be proud of. I am sorry that so many of our promising ones have been killed.”

William Bradford must have been promoted to Sergeant in 1915. Included with the lot is a postcard with the title For England’s Glory printed by the Kent Messenger with 1915 handwritten on the reverse. 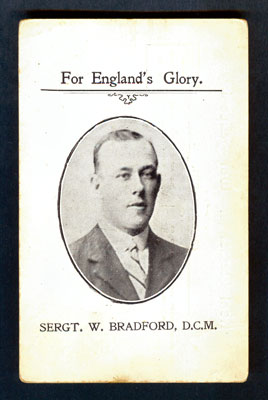 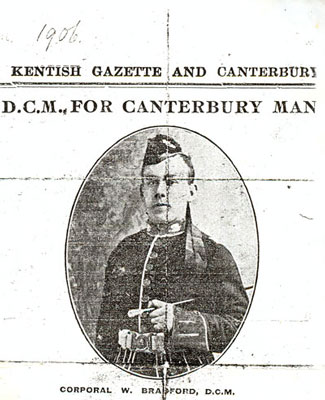 The final photograph with the lot is with Sergeant Bradford lying in a hospital bed with a nurse and 7 patients gathered round and marked Craigleith Hospital Nov 1917 on the reverse. It is not known if he was wounded or suffering from an illness. 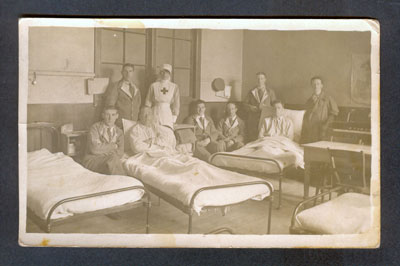