The French Resistance King's Medal For Courage in the Cause of Freedom, French 1939 Croix de Guerre with star group to Madame Margueritte di Giacomo caused some excitement in our December 2009 auction. Estimated at £3,500, it eventually sold for £4,025.

Madame Margueritte di Giacomo was a member of the Shelburn Resistance Group near Paris in 1944. She was a young mother who ran a hostel for hiding escaping Allied airmen and also assisted by guiding them through German lines. The various commendations show she helped between 36 and 40 airmen to escape, a remarkable woman. 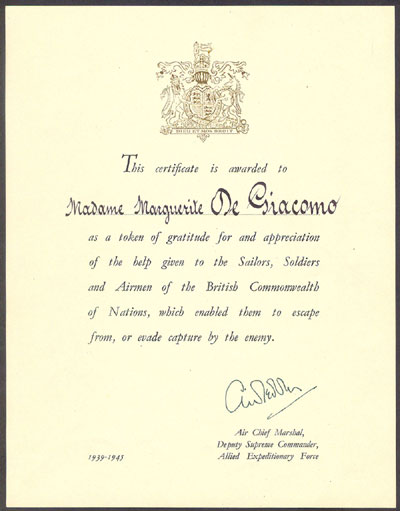 The King’s Medal was awarded at the British Embassy in Paris in November 1946 for: “Madame Di Giacomo sheltered at least 36 Allied evaders; she fed them, and cared for them in every possible way until she was able to arrange for their evacuation. She also provided false papers and identity cards. Although she has a young daughter Madame Di Giacomo’s devotion to the Allied cause was such that she not only housed Allied evaders, but also did convoy work, and in August 1944 crossed the German lines with six evaders whom she guided to safety. Madame Di Giacomo was, at all times, an inspiration to those with whom she came in touch; she showed a complete disregard for her own safety and a fine patriotic spirit.” Only approximately 3200 King’s Medal for Courage in the Cause of Freedom were issued and the number issued to women is not known. 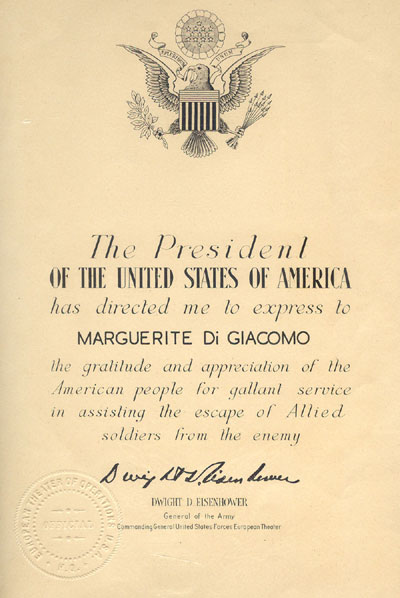 The USA Medal for Freedom was presented in February 1947 for:

“Madame Di Giacomo, French Civilian, for exceptionally meritorious achievement which aided the United States in the prosecution of the war against the enemy in Continental Europe, from December 1943 to August 1944. She distinguished herself by her great courage, ingenuity, and determination in the performance of hazardous missions. Completely disregarding her personal safety she assisted directly in the evasion of thirty eight Allied airmen, and, through her unselfish devotion to the Allied cause contributed materially to the success of the war effort, thereby meriting the praise and recognition of the United States of America.” 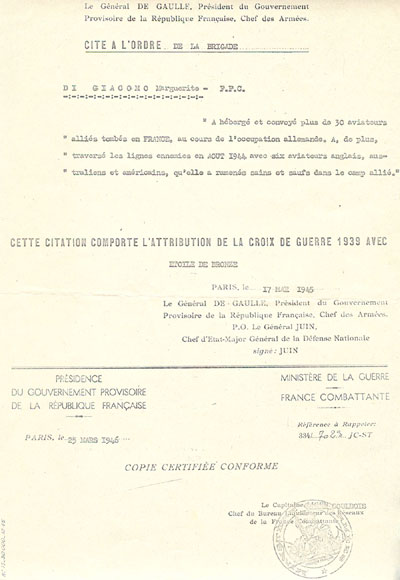 The Croix de Guerre with star was granted on 17th March 1945 again for her assistance to Allied airmen. 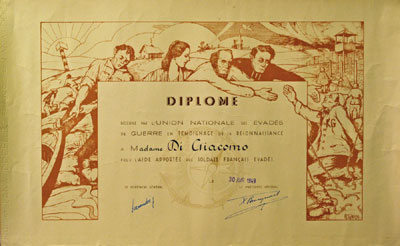 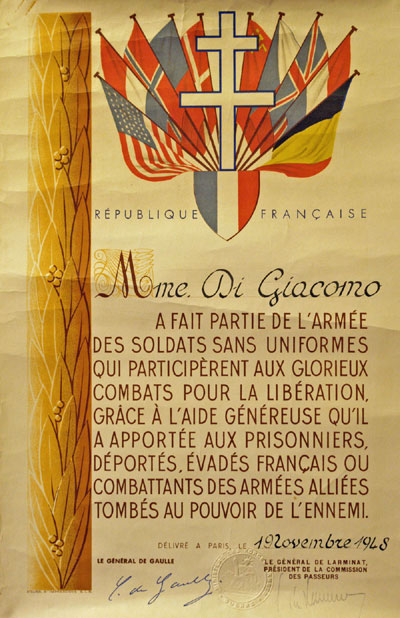 The full medal details are King's Medal For Courage in the Cause of Freedom (Ladies Bow), French 1939 Croix de Guerre with star, 1939-45 Combat Volunteers Cross and USA Medal of Freedom with bronze palm to Madame Margueritte di Giacomo (all un-named as issued). Sold with copies of superb range of named supporting documents including British Deputy SCAEF certificate for helping Allied airmen, USA Presidential certificate for helping Allied airmen and tube of transmission, 2 Award certificates and citation for Croix de Guerre and star, French certificates for helping Allied airmen with Diploma of General de Gaulle, Diploma of L’Union Nationale des Evades, original citation and translation of King’s Medal, invitation to British Embassy to receive King’s Medal, Ministry of Defence attestation stating she served in Shelburn Resistance Group in 1944, list of 41 airmen she helped to escape, silk parachute with details of escapees typed on etc.