The WWII Military Medal group to Acting Corporal and later Major Peter Douglas Kelley South Wales Borderers was offered in our auction on Wednesday 12th August 2009 and it realised £2,875. 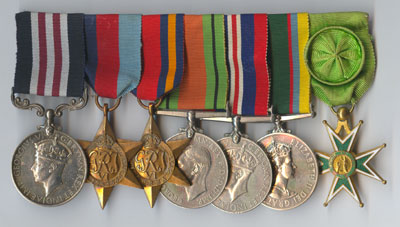 The 6th SWB arrived in India in October 1942. They were involved in action from March 1944 onwards. The battalion was involved in a five-day battle with the Japanese 128th Infantry Regiment at Pinwe in mid November 1944. It was during this battle that Corporal Kelley was recommended for a commission for “gallantry and initiative at the Battle of Pinwe”, during which the battalion suffered over 150 casualties. 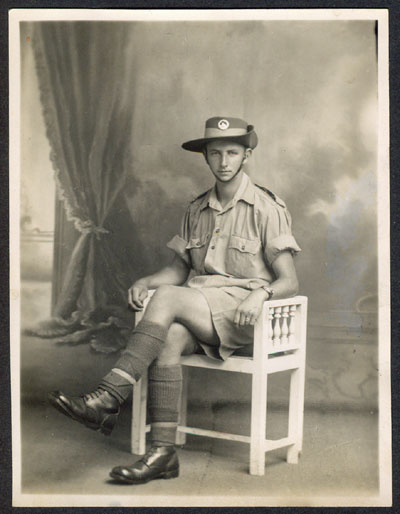 On the 14th February 1945 the Japanese launched a series of attacks against the Allied bridgeheads across the Shweli River. It was during these actions that Corporal Kelley earned the award of the Military Medal.

On 16th February, 1945, during the action fought on the west bank of the Shweli River to cover the withdrawal of another Brigade Headquarters, this NCO led his section in an attack on a strong enemy road block between his company and Battalion Tactical Headquarters. During a bayonet charge on a Japanese light machine gun post, he was wounded and was evacuated to Company Headquarters for dressings. Later, he came back to his platoon, bandaged in several places, and reported to his Platoon Commander who was still engaged in attacking the road block. The Platoon Commander asked him what he was doing and where his equipment was. Corporal Kelley replied that he had returned to lead his section again, and that, if he had been seen picking up his equipment, his company Commander would not have allowed him to return. He rejoined his section, and after a quick reconnaissance ordered another attack on the same post, which was quickly captured in spite of heavy casualties. In this attack, Corporal Kelley personally accounted for four Japanese killed, but was himself again wounded, this time very severely. The personal courage and leadership of the NCO, both in this action and throughout the whole campaign, have been of the highest order.

N.B. Several weeks previously he had been recommended for a commission for “gallantry and initiative at the Battle of Pinwe.” His papers confirming the recommendation and posting him to Bangalore arrived at Battalion Headquarters a few days after the incident described above. The severe wounds received in this engagement however, have detained him in hospital for seven months and have so far prevented his proceeding with his commission as directed. 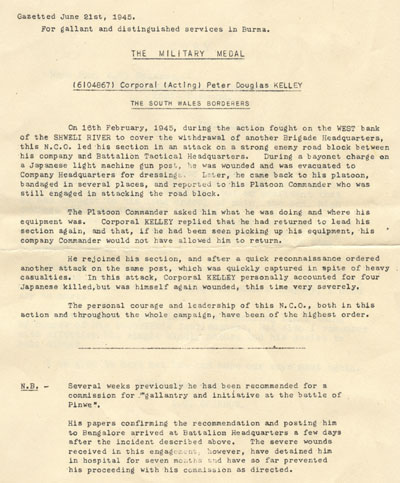 The medal group was offered together with a copy of a letter extract from Major D.C.W. Lord, 6th South Wales Borderers, South East Asia Command.

….Peter has always been a good keen soldier, far above the average intelligence and I am very sorry that he was unable to proceed to OCTU before he was wounded. The Commanding Officer was at the time loath to lose good leaders so his application was held up for a while whilst the C.O. attempted to obtain immediate commissions; unfortunately he failed. Peter is of course far too modest as it was his own personal example, leadership and bravery that gained his award; I only submitted what I saw. He was with me when I was the platoon commander of a special platoon, “Guerillas”, which consisted of potential officers and NCOs. During the time we were together I always found him one of the most reliable members of the platoon and certainly the coolest under fire. On the many patrols I did I always found Peter dressed ready and waiting to go out with me irrespective of which platoon was responsible for providing the patrol; that alone was a perfect example to all present, especially as conditions were very difficult at the time. He won his M.M. at Myitson at a later date but I expect he will tell you about his experiences when he arrives home. I only mentioned the above in an attempt to show you that he has most certainly earned every inch of ribbon he has won.

Included with the group was an exercise book with 42 complete pages of hand written notes on his service in Burma, containing fascinating details on jungle life. A brief extract follows.

To round off my picture without a mention of the men with whom it was my privilege to fight would be to leave this tale sadly incomplete. Of John, need more be said? Yes, one thing only and that is his complete disregard for personal danger in tight spots. To sum up, I saw him once sitting in a one man fox-hole reading “The Stars Look Down”. The Japs were about to attack again but John calmly sat there and told a signaler to “ring ‘em up and tell ‘em to hold everything ‘till I’ve finished the chapter!” Can you beat it? Besides John and myself there was – “Griff”, a devil-may-care young Welshman, he was lance corporal in charge of my light machine gun. He courted danger in the same light hearted manner in which he courted his sweetheart in South Wales, and it earned him a periodical MM for gallantry and devotion to duty. A former miner, he took life – and death – very casually…. 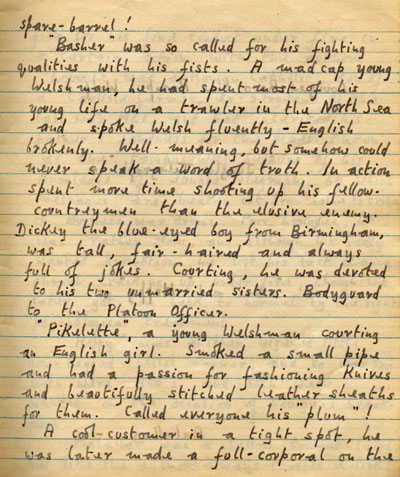 The group was sold on behalf of the family and had never before been on the market.