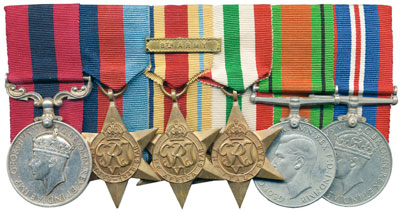 The Battle of Gazala was fought in the Western desert around the strategic port of Tobruk between 26th May and 21st June 1942. The Allied defensive line consisted of a number of Brigade size boxes protected by landmines and barbwire.

The award of the DCM was announced in the London Gazette dated 15th October 1942 while serving with 2nd Regt R.H.A.