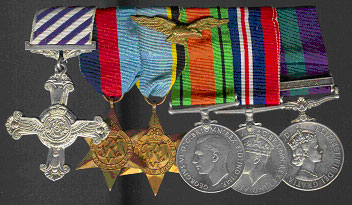 Flt Lt R.G.S. Franks was recommended for the Distinguished Flying Cross on the 20th July 1944 while serving with Number 582 Squadron of Number 8 Pathfinder Group:

“This officer is the set operator of a very reliable marking crew. He has taken part in 53 attacks on German and French targets, 16 of them having been as a marker. He has shown a high degree of skill and his determined spirit has been an inspiration to his crew. On many occasions he has proved himself to be an outstanding member of a gallant crew by his coolness under fire and his dogged determination to succeed.”

The Pathfinder Force was formed on 15th August 1942, with headquarters at Wyton, Huntingdonshire, at the direct request of the Air Ministry. It initially comprised five squadrons - one from each of the operational Bomber Command Groups: No. 1 Group contributed No.156 Squadron (Wellingtons), No. 2 Group No. 109 Squadron - then "special duties" (Wellingtons and Mosquitoes), No. 3 Group No. 7 Squadron (Stirlings), No. 4 Group No. 35 Squadron (Halifaxes) and No. 5 Group No. 83 Squadron (Lancasters). The squadrons were located on adjacent airfields within No. 3 Group (No. 7 at Oakington on the outskirts of Cambridge, No. 35 at Graveley, a new airfield between Huntingdon and St. Neots, Nos. 83 and 109 at Wyton and No. 156 at Warboys), but under the direct control of Air Chief Marshal Harris, Air Officer Commanding-in-Chief Bomber Command. This prime organisation allowed selected crews from the operational bomber groups to transfer without the delay of conversion to new types of aircraft, but it soon expanded into a completely new Group - No. 8 (PFF) by 8th January 1943, and eventually re-equipped with Lancasters and Mosquitos, the most suitable aircraft for the task.

The idea of using a corps d'élite of crews of high navigational ability was nothing new and was in fact a necessary stage in the evolution of the technique of strategic bombing. Much earlier the Germans had employed Kampfgruppe 100 to precede the main force on each raid and, with the aid of navigational beams (Knickebein, X Gerãt and Y Gerãt), accurately lit up the target area with incendiary fires. These German methods had been quickly appraised and defeated by counter-measures, but in December 1941, Bomber Command had pressed for "the formation of specialist squadrons to initiate raids". No. 3 Group, equipped with Gee apparatus, had already acted in this manner and, by August 1942, when the enemy first began to jam transmissions, had raised the average of the main force aircraft reaching the precise target, in favourable weather, to 40 per cent, compared with 26 per cent in the three months previous to February 1942. This was not sufficient, however, to ensure ultimate success by night bombing and Harris, though strongly opposed to the formation within Bomber Command of a corps d'élite, with its inevitable disadvantage of fostering jealousy, and himself advocating a specialist squadron within each group, finally agreed to the formation of the new force to be commanded by Group Captain D.C.T. Bennett. Bennett, an Australian pilot in the RAF and a former CO of both Nos. 77 and 10 Bomber Squadrons, commanded the Pathfinder Force throughout its entire fighting career.
The Pathfinder Force began operations within a few hours of its formation and continued its work of leading the main force against the enemy until the bombers' offensive ceased, shortly before VE Day.

The gallantry of the PFF is legendary, and its contribution to the war effort immense, perfecting as it did techniques for precision main force bombing. Probably the greatest of many successes was its part in the sustained Battle of the Ruhr. The Pathfinder Group gradually expanded to become a force which, by April 1945, comprised 19 operational squadrons.

The World War II Distinguished Flying Cross group to Flt Lt R.G.S. Franks, R.A.F., was offered in our auction on Wednesday 9th May 2007 and it realised £2,012.