One of the Rowland Hill reforms of 1840, which is sometimes overlooked, is the speeding up of delivery of the mail. A Post Office report of 1835 stated that in centra lLondon it took a postman on average 1½ minutes to deliver a letter. This was because the majority of the post was not pre-paid and the postman would have to knock on each door and wait for cash to be found and probably change to be given. Rowland Hill was responsible for the concept of widespread letter-boxes in doors and his reforms led to uniform 1d postage for letters weighing less than ½ an ounce, as long as the postage was pre-paid, but double the amount if the postman had to collect the postage from the recipient. Hill reported in his diary that on the night ofJanuary 10th 1840, the day of uniform penny postage introduction, 112,000 letters were dispatched from central London and of these only 13,000 or 14,000 were not pre-paid. 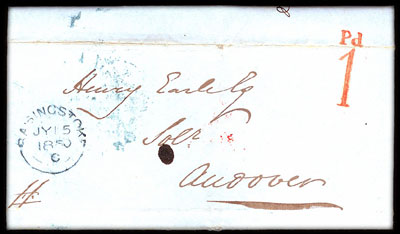 1850 entire from Basingstoke toAndover, bearing theBasingstoke“Pd 1” strike in red of the uniform penny post. The red colour indicates that the postage had been prepaid. 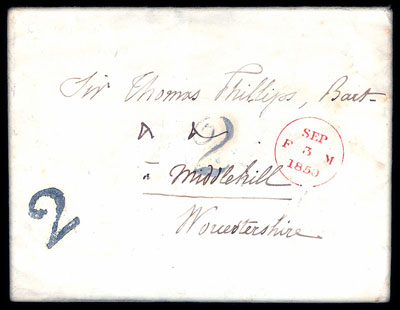 1850 entire to Middlehill in Worcestershire, bearing two different unpaid “2” handstamps of the uniform penny post, one of Broadway and one of Worcester.

In May 2012 I had the good fortune to be the person responsible for breaking down and describing a wonderful collection of Great Britain postal history, destined for a future Warwick and Warwick auction. It contains examples of the diverse range of handstamps which came into use as a result of the 1840 reforms. There were 2 volumes of entires with handstruck “1” marks in red, indicating pre-payment of the 1d rate. Many of the handstamps were locally made and varied from town to town, some incorporating wording. A further volume contained entires with handstuck “2” marks in black, the majority indicative of the fact that the sender had not pre-paid the postage and 2d was to be collected by the postman. 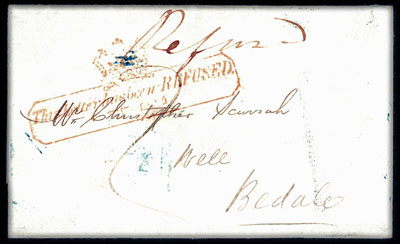 1848 entire from Richmond to Bedale, rated “2”, with “Refused” in ms. and the London handstamp “This Letter has been REFUSED”, dated February 1848. This h/s was introduced as a consequence of an Act of Parliament of 1847, making it compulsory for the sender to pay postage on refused unpaid letters and was in use for a very short time.

John Hendy, in his 1909 book “The History of the Postmarks of the British Isles from 1840 to 1876”, states that in the 1840s a “restless adventurer” named Joseph Ady continually sent unpaid letters to various individuals telling them that he would divulge information to their advantage if they would pay him a fee. Many of these letters were refused and ended up in the Dead Letter Office, Ady refusing to pay the postage due. As a result of this an Act was passed in 1847 making it an offence not to pay the postage on returned unpaid letters and a handstamp was issued for the London, Edinburgh and Dublin offices with the wording “This Letter has been REFUSED”. Ady was apparently the first person to be sued under the new act and served a prison sentence. It appears that this handstamp was in use for a very limited period and is very rare.