Postal Disruption in German East Africa in World War I

What do you do if you are in charge of the post office in a small outpost of the empire, which is blockaded by the enemy and your stocks of stamps are running out? This was the situation in German East Africa during the First World War. 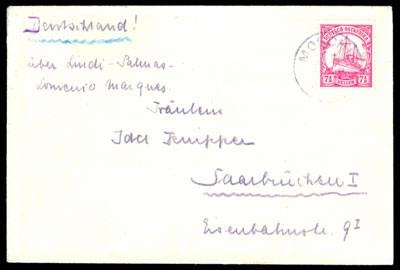 1915 cover to Germany from Moschi, routed via neutral Portuguese East Africa. This facility ceased in July 1915.

The colony of German East Africa began as the result of a treaty establishing a protectorate over the area in 1885. The first postal agencies were established on the islands of Lamu and Zanzibar, but these were closed in 1891 when the two areas were transferred to Great Britain. Progressively post offices were opened on the mainland and the colony prospered. The arrival of the First World War disrupted communications with Germany and the last mail steamer left Tanga on July 25 1914. From October 1914 to July 1915 an outgoing mail service was provided via the neutral Portuguese colony of Mozambique to the south. This ceased after British pressure was applied on the Portuguese. From then until the end of the war very little correspondence left the colony, being retained at Dar-es-Salaam or returned to the sender. However internal post continued and the stock of postage stamps, which had been supplied from Germany was gradually being exhausted and could not be replaced, owing to the British naval blockade. Emergency measures were introduced. Cash franking was permitted for printed papers in Dar-es-Salaam, from May 1915 and a handstamp was applied to show that the fee had been paid. This was later extended to other post offices. From January 1 1916, due to worsening stocks, the cash franking system was extended to ordinary and registered letters. Cash franking ended in May 1916 with the arrival of the blockade running ship "Marie", with fresh supplies of stamps from Berlin. 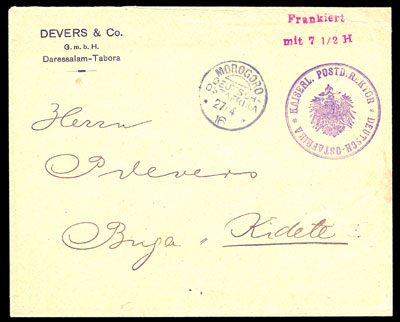 From January 1916 private envelopes could be turned into postal stationery on presentation of at least 10 envelopes at one of three post offices.

Another scheme to alleviate the shortage of postage stamps was the creation of prepaid envelopes locally. From January 8 1916 envelopes in multiples of 10 could be taken to any of 3 post offices where they would be handstamped with the post office seal and a further handstamp reading "Frankiert / mit 7½ H" (franked with 7½ heller). They could then be used anywhere in the colony for inland postage.

A further emergency measure was the use of German stamps recovered from the 2 German ships marooned in East African waters, namely the "Könisburg" and the "Möwe", though these stamps were only ever used by postal clerks on parcel cards.

A further measure adopted was the preparation of locally printed stamps at the Mission in Wuga. However, they were never issued as the blockade running ship "Marie" arrived with new supplies from Berlin. The Wuga provisionals were buried in a concrete vault when the British troops advanced and were eventually recovered and sent to Berlin in 1921, from where they were sold, in poor condition, to philatelists. 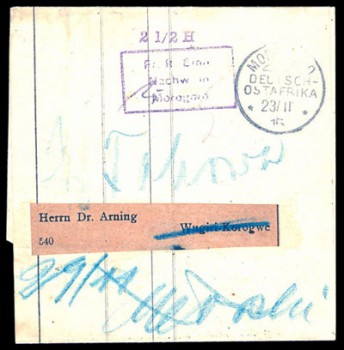 Home-made wrapper, owing to a stationery shortage, with a cash franking receipt handstamp of Morogoro.

Stamps were not the only commodity in short supply because of the blockade. Envelopes and stationery also became scarce and wrappers and envelopes were home made out of newspapers and magazines. From a postal history point of view it is very interesting to find a wrapper made from a magazine, bearing a cash franking handstamp.