Postcard from the Titanic Realises £8,912

A rare picture postcard purchased on board the doomed liner Titanic and mailed back to England from the Irish port of Queenstown, just 4 days before the liner collided with an iceberg in the Atlantic and sank, realised the staggering figure of £8,912 (including the buyers' premium) in our March 13th 2002 auction.

The sender of the card was a member of the crew, second-class saloon steward, Jacob William Gibbons, who was born in Charminster, near Dorchester, on October 10th 1875. When he signed on to the Titanic, his first sailing, he was living at Studland Bay, in Dorset. Jacob was one of the very few crew members who survived the disaster and was rescued from lifeboat 11.

The picture side of the postcard detailed the 2nd class saloon breakfast menu for April 11th 1912, when dishes such as boiled hominy and grilled ox kidneys and bacon were on offer. These breakfast menu cards from the Titanic are exceedingly rare and we have never seen another example of this particular date. The card was addressed to Miss L.Payne of Studland Bay and had the Queenstown postmark clearly legible of April 11th 1912. Jacob's succinct message on the reverse was almost prophetic. It read: 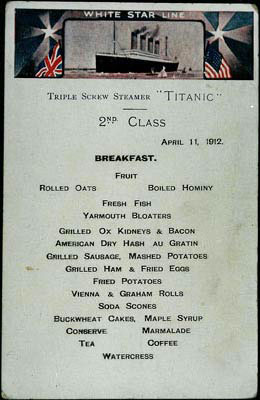 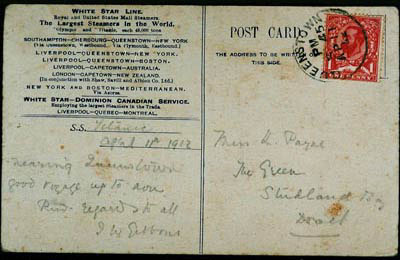