Flying at the mercy of the elements, in a gondola suspended below a balloon containing hot air or a gas lighter than air, was a tradition over 100 years old by the time that picture postcards were in the ascendancy at the end of the nineteenth century. However postcards commemorating balloon flights are rare. Perhaps the reason for this is that the events themselves were rare, especially in Great Britain. The first balloon flight in England took place in 1784 and the English Channel was successfully crossed in a balloon a year later. Every student of French philately will have heard of the ballons montÄ—s and non-montÄ—s that were employed to despatch letters and carrier pigeons from the surrounded city of Paris during the Franco-Prussian war of 1870-1. Many of the balloons successfully flew over the Prussian lines and their cargo was eventually delivered. However the problem with carriage of mail by balloon is that the balloon’s path is dictated by the wind and cannot be relied on. In the 1890s and later, balloons were often inflated at exhibition venues, especially on the continent, and in most cases they remained tethered to the ground. In some instances flights were organised and occasionally the carriage of commemorative mail was offered.

To celebrate the coronation of Edward VII in August 1902, a balloon flight was organised at Beckenham in Kent. Three bundles of 100 postcards were flown and I believe only two have survived. Then, a month later, a balloon flight was planned to raise funds for the Lifeboat Service. The public were invited to purchase specially printed postcards depicting a hot air balloon bearing the banner Lifeboat Saturday. 4,000 such cards were sold for the flight from Manchester Botanical Gardens but it would seem that again only two have survived. One sold in auction in 1983 for £1,675. The flight had been a good fundraiser and it was decided to repeat the exercise a year later, on August 29th 1903. This time the printed card, which cost 3d, had a similar image of the balloon, but the landscape beneath was given a rather inappropriate Arctic setting. However at the take off the balloon was damaged and the flight had to be aborted. Not wishing to disappoint the large numbers who had purchased the 3,200 souvenir flight cards, it was decided to try again and on September 5th the balloon took off successfully from Alexandra Palace in north London and landed at Ongar in Essex, from where the postcards were forwarded to their addressees. In 2010 Warwick and Warwick sold two of these flown postcards at £920 each.

The Daily Graphic was a mass circulation newspaper in the Edwardian era and in 1907 it sponsored a balloon flight, as an advertising venture. It printed hundreds of miniature booklets giving details of the flight and advertising the Daily Graphic.  The aviators planned to jettison these booklets en route as ballast, in the same way that earlier balloon pilots had jettisoned sand to maintain the height of the balloon. The coal-gas filled balloon, named Mammoth, took off from Crystal Palace, London at 5 pm on October 12th 1907, with a crew of three and 15,000 postcards. It drifted for 20 hours and 30 minutes over the North Sea and Denmark, eventually crash landing near the village of Brackau, near Mellerud, in southern Sweden. The crew escaped unhurt but the balloon careered on for a further 30 miles, scattering its load of postcards over a considerable area. Some cards were found and forwarded to the addressees from Tosse, where the balloon eventually came to rest, but the majority were recovered over a period of several weeks by the Mellerud schoolmaster, Mr Mickow, who had played host to the aviators when they arrived at his door after the balloon’s crash landing.

James Gordon Bennett was the millionaire owner of the New York Herald. In 1906 he sponsored a trophy, the Gordon Bennett Cup, to be given to the person who piloted the gas-filled balloon which flew the furthest distance from the launch site in Paris. The Gordon Bennett Race became an annual event, being competed for every year from 1906 to 1938, with the exception of 1914-19 and 1931. The event was never held in Britain and this is the reason why postcards of the races are rarely seen in this country. The greatest distance covered by a balloon in one of these races was 2,191 miles attained by the French balloon La Picardie, in the 1912 event which started from Stuttgart in Germany. The Gordon Bennett Races were resurrected in 1983 and continue to this day, the 2010 event having started in Bristol. 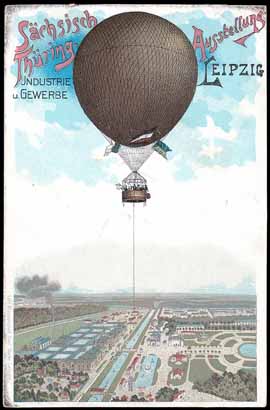 A tethered balloon features prominently on this chromo-litho card of the Saxony-Thuringia Exhibition of Industry and Business in 1897. 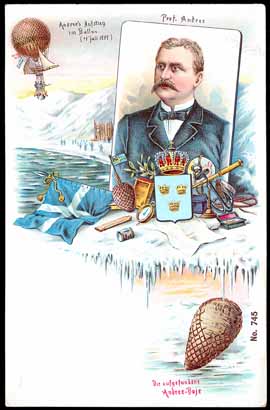 Professor S.A. AndrÄ—e, was a Swedish balloonist who, with two others, left the north coast of Spitsbergen in northern Norway, in July 1897, in an ill-conceived attempt to cross the North Pole by hydrogen balloon. They crash-landed the leaking balloon on the pack ice after only two days and spent the next 12 weeks walking back over the ice to land. They died of exhaustion on the uninhabited White Island of Spitsbergen. This undivided back chromo-litho card, published in Germany, commemorates the expedition. 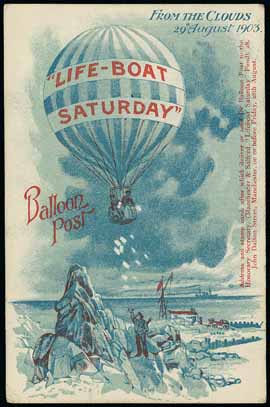 The 1903 Lifeboat Saturday balloon-flown card sold in auction in 2010 for £920. The message on the reverse reads “Sky 4.30 pm, Dear Muriel, It is jolly cold up here”. A father sent this card to his daughter as a souvenir of the flight. 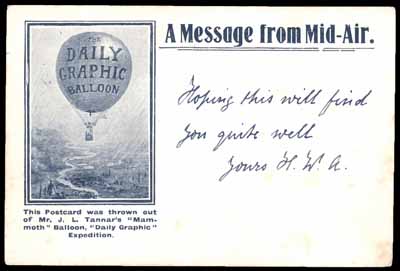 Postcard prepared for and carried on the 1907 Daily Graphic flight from Crystal Palace, London, which crash landed in southern Sweden after 20 hours and 30 minutes. Value at auction £250 - £300. 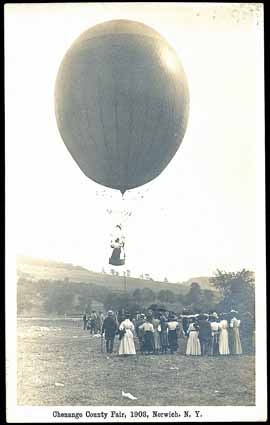 Passenger safety and public liability were not issues which worried the organisers of the Chenango County Fair in Norwich, New York State, in 1908. This magnificent real photographic card is rare. 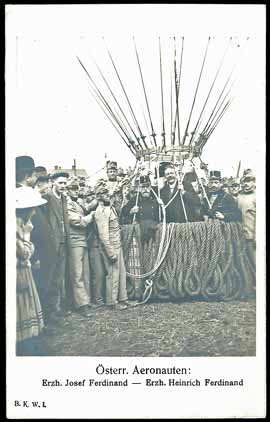 The Archduke Josef Ferdinand of Austria was a keen aviator and this close-up real photographic card shows him and the Archduke Heinrich in a balloon gondola prior to the 1909 flight, which he organised from Linz in Austria to Dieppe in France. The flight lasted 16 hours. 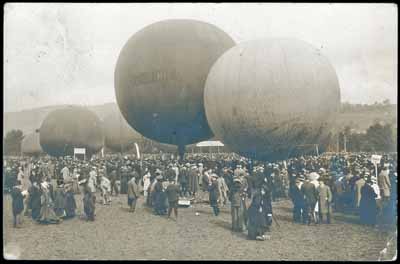 The 1909 Gordon Bennett balloon race departed from Zurich in Switzerland. In this real photographic card crowds gather to watch the departure. 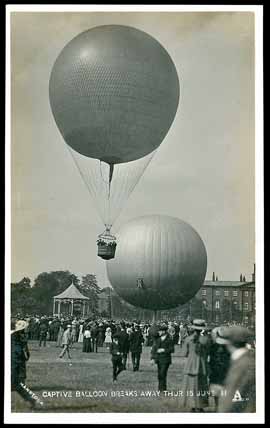 The caption to this superb real photographic card is Captive Balloon breaks away Thur 15 June 11. Unfortunately the location is not stated, though clearly it is in Great Britain. The reverse bears the inscription “Bilton. The York Picture Postcard Emporium” and the name of the photographer appears to be Hanstock. More research is necessary. 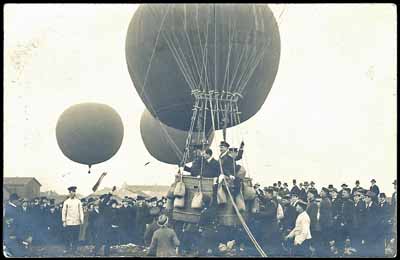 The 1912 Gordon Bennett balloon race left from Stuttgart in Germany. This real photographic card was published by Rausch & Pester of Karlsruhe. 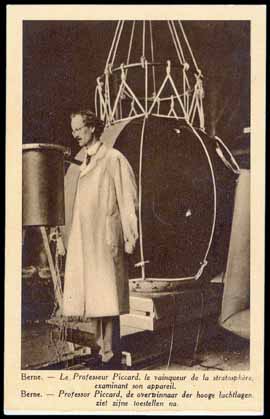 The Swiss physicist Auguste Piccard wanted to measure the activity of cosmic rays in the stratosphere and investigate Einstein's theory of relativity. He constructed a pressurised aluminium capsule and attached it to a large hydrogen balloon. In May 1931, with an assistant, Paul Kipfer, he took off from Augsberg, Germany and reached a record height of 9.8 miles. They crash-landed on a glacier in the Austrian Alps. Piccard made 26 further balloon flights, climbing to an incredible altitude of 14 miles. This printed card was published as a publicity card by the Belgian chocolate firm Lecocq.