Ernest Shackleton, the Antarctic explorer, later to lead his own expedition, served as a lieutenant on board “Discovery”, under Captain Scott, on the 1901-3 National Antarctic Expedition and it was from the expedition’s winter quarters that he wrote to his friend, Kitty Pogson, the well-known London socialite. The letter, dated 30th September 1902, was offered in our July 14th 2004 sale, where it realised £4,370.

Shackleton is impressed by the “strange white world with its days 24 hours long and then nights of the same length.” On his return he promises to show Kitty the photos he has taken. The dangers of the place are very much on his mind. “We unfortunately lost one of our men in a very bad blizzard by his falling over an ice cliff, and we nearly lost one of the lieutenants and three more men….The weather is pretty cold now, the lowest temperature having been -62 F.”

The great goal however was the push southwards towards the pole. “I wonder how far we shall get to the South, you see we have to drag all our own provisions and as there is no chance of catching game like there is in the North we must be prepared for all emergencies and carry more food than we actually want.” 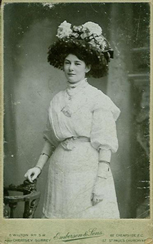 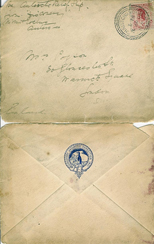 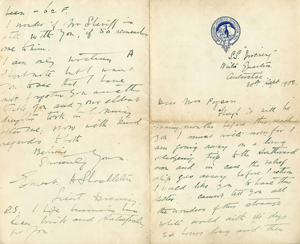 The letter to Kitty ends in an enigmatic postscript. “I hope business has been brisk and satisfactory for you.”

The letter is accompanied by its envelope, the reverse of which is separated from the front. It bears the Expedition crest and a New Zealand stamp, cancelled at Christchurch some 7 months later. Shackleton has endorsed the envelope “By Antarctic Relief Ship, from “Discovery”, Mount Erebus, Antarctica.” It is interesting to note that the stamp used was the normal New Zealand stamp, without an overprint. On this 1901-3 expedition King Edward VII Land was discovered and named after the monarch. Shackleton’s subsequent 1908 expedition sought and was granted permission to overprint the stamps used on expedition correspondence with the country name “King Edward VII Land”.