The 1991 Gulf Operations Distinguished Service Cross group to Lieutenant Stephen Michael Marshall R.N. was offered, on behalf of the recipient, in Warwick & Warwick's auction on Wednesday 20th February 2013 and sold for £17,250, including the buyer's premium. 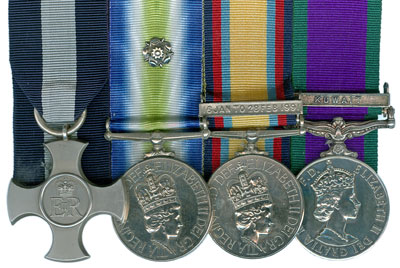 Stephen Michael Marshall was born at the Royal Navy Maternity Hospital in Southsea, on 1st July 1956. His father was a Royal Navy Engineer Officer who served for 42 years and his grandfather was a Royal Marines RSM who served for 35 years. He joined the Royal Navy in 1972 as a Junior Seaman and became a Sonar Operator and sub specialised as a Ships Diver. Between 1972 and 1980, served in HMS Scylla, Devonshire and Alacrity, reaching the rate of Petty Officer. In 1981 he went to BRNC Dartmouth to complete his commissioning course, which he passed out as a Special Duties Sub Lieutenant.

After warfare and navigation training, he joined HMS Hydra as the Diving Officer in early 1982. Deployed in April 1982 for the Falkland Islands - Hydra was converted to an Ambulance Ship. He received extensive medical training so that he could assist the medical staff onboard with casualty handling. During the Falklands War, Hydra went into Falklands Sound to evacuate casualties from ships in the landing area and also from the field hospital before transporting them to the Hospital Ship, Uganda. Because of the high amount of injured servicemen, apart from his duties as a Bridge Watch keeping Officer, he worked in the wards that had been set up on the ship, changing dressings and administering medicine. At the end of the conflict Hydra carried out three trips to Montevideo, taking casualties for evacuation by air to the UK. Hydra then spent another 2 months carrying supplies to the outlying settlements before returning to the UK in September and the last ship of the original task force to return home.

In early 1983 he joined HMS Falmouth as the Diving Officer and deployed again to the Falklands for 5 months, conducting patrol around the islands to deter any possible further attacks. He deployed ashore during that time with his diving team to assist the Falkland Island Clearance Diving Team to clearing ammunition and weapons from Port Stanley Harbour and surveying wrecks of ships sunk during the conflict. In late 1983, he joined HMS Vernon to commence the Mine Warfare and Clearance Diving Officer (MCDO) course. During the diving phase of the course he had a serious diving accident at 54 metres when his rebreather diving equipment malfunctioned. He drowned and received severe burns to his eyes from the soda lime used in the set to remove CO2 but was luckily resuscitated and after spending 3 weeks in hospital, continued with the course, qualifying as an MCDO in October 1984 after the final phase to qualify as an Explosive Ordnance Disposal Operator. He was then posted to HMS Cattistock, based in Scotland as the Operations and Diving Officer. Over the next 2 years he carried out MCM duties around the UK and also spent 7 months in the NATO MCM Squadron operating all over Europe. Whilst in Cattistock, his diving team dealt with several old wartime mines and assisted salvage efforts to locate and inspect aircraft that had crashed into the sea. 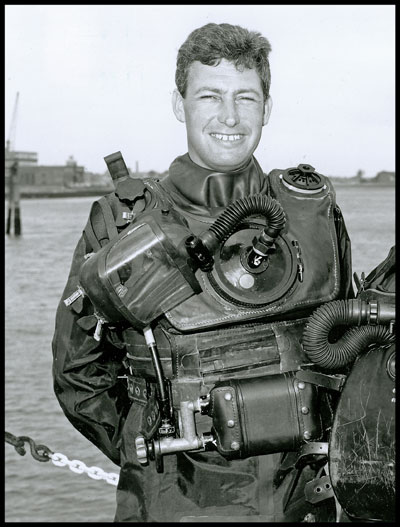 In 1986 he was posted to HMS Vernon and served as a training Officer at the Diving School before qualifying as a Saturation Diving Officer in preparation for a foreign exchange appointment in Canada at their Experimental Diving Unit. During two and a half years there he was responsible for the testing and evaluation of new rebreather diving sets being developed for the Canadian Navy and also participating in many experimental dives to validate decompression tables and military operational diving procedures. After returning to the UK in mid 1989, he spent a further short period at the Diving School before attending the Improvised Explosive Device Disposal (IEDD) Operators course, parachute training, close quarters battle training and other specialists courses ahead of becoming the Officer in Charge of Fleet Diving Unit One, the Maritime Counter Terrorist (MCT) unit. This unit supported the SBS in the MCT role, providing EOD and IEDD cover and during the next year trained continuously for this role on 6 hours notice to move at all times. They also had to maintain a conventional clearance diver role as well.

As the build up to Gulf War One gained pace in late 1990, they commenced readiness training for a possible deployment to the Gulf to provide MCT cover and in late December he eventually deployed at 8 hours notice to the UAE with half of the unit to protect all RN shipping in the UAE. They carried out continuous underwater searches of the ships in harbour and advised the crews on how to protect the ships from terrorist attack from both land and sea. By the start of the war they had been joined by other elements from the Fleet Diving Group and embarked in RFA Sir Galahad and joined up with the Advanced Forces to clear routes through the minefields in the Northern Persian Gulf to the Kuwaiti coast and harbours. During this period they dealt with dozens of live mines, under constant threat of attack by the Iraqis, diving in very hostile conditions up very close to the enemy coast. They were also very close to both the USS Tripoli and Princetown when they struck mines and were badly damaged and carried out underwater inspections of them whilst still in the minefield. The unit conducted daily airborne operations into the minefields to deploy divers to deal with the mines and also carried at several Mine Investigations and Exploitations (MIE) on ground mines that could not be readily identified. 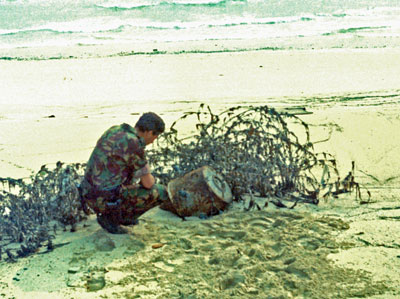 On the day of the surrender they moved ashore by helicopter to the main Kuwaiti port and made camp in shipping containers that the Iraqis had moved out of the day before. The port was heavily damaged with sunken ships everywhere, unexploded ordnance and the possibility of mines in the water. There were booby traps left for us and the constant threat of snipers. Additionally we subsisted in an atmosphere heavy with acrid smoke and toxic fumes from the oilfield fires and diving through a metre of crude oil in zero visibility to carry out our tasks. They had no lighting or running water and the whole region was completely destroyed. Everything had to be improvised, using what skills and limited equipment were available. After clearing this harbour well enough to allow ships to dock they moved to another harbour and conducted similar operations as well as carrying out an EOD clearance of Faylaka Island and the beaches surrounding Kuwait city that were heavily mined. The unit eventually returned to the UK in April 1991 after being relieved by another team.

The DSC was announced in the London Gazette dated 28th June 1991:

“Marshall flew from the United Kingdom to the Arabian Gulf on 29 December 1990. Having received eight hours’ notice to gather Fleet Diving Unit A (FDU A), of which he is the Officer in Charge, pack the required stores and depart for the airhead. Setting up his Unit at Jebel Ali he orgainsed his men’s training for Explosive Ordnance Disposal (EOD) work and supervised the checking of all RN and RFA ships’ underwater fittings as they arrived in theatre.

On 24 January 1991, FDU A embarked in RFA Sir Galahad and Marshall took part in the planning for, and trained his Unit for, possible amphibious operations in the Northern Arabian Gulf. During Operation Desert Slash he led FDU A with selflessness and great personal courage, resolutely guiding his men in countermining operations against buoyant and floating mines and supervising protracted dives on ground mines to bring them to the surface for exploitation. He showed conspicuous leadership by putting himself at the forefront of the action on many occasions and, in particular, deploying twice from helicopters to place charges on live buoyant mines. Not content to allow anyone to stand into danger before himself, he tirelessly flew on numerous helicopter sorties as the supervisor of his EOD team to search for mines, frequently within ten miles of the enemy coast.
Moving ashore to Mina Ash Shuaybah on 5 March, he supervised the setting up of a base camp. Having co-ordinated plans with American and Australian Units, Marshall led FDU A in searching the harbours and environs of this port, Mina Ash Shuaybah (Kuwait City) and Faylakah Island, rendering safe unstable live ordnance, beached mines, booby traps and Improvised Explosive Devices, clearing buildings and oil tankers of ordnance and taking on the gruesome task of recovering the bodies of dead Iraqi soldiers and Kuwaitis. Often these jobs required him and his Unit to first reach the scene through areas of anti-personnel mines and barbed wire. Throughout this extremely dangerous operation he showed a calm professionalism and dynamic leadership rarely seen in one of his years, and insisted on taking a fully active part in every aspect of the work.

The conditions under which FDU A operated were atrocious. With no infrastructure ashore the men subsisted in cargo containers on a jetty with no light, sanitation or potable water, in an atmosphere heavy with acrid smoke and toxic fumes from the oilfield fires burning inland, and diving in water with zero visibility due to the thick oil pollution. All the time they were at risk from random gunfire from uncontrolled factions of the local population. That his Unit’s morale remained at a consistently buoyant level and that the EOD operations were conducted in an eminently professional manner in the face of such adversity is entirely thanks to Marshall’s outstanding leadership and remarkable man-management.” 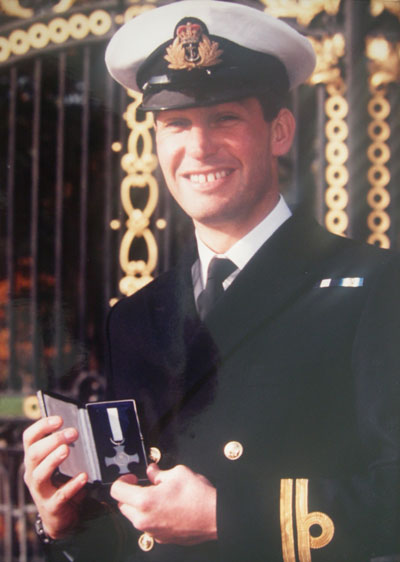 He spent the next 3 years as the OC of the MCT Team and in another role in the Fleet Diving Group before leaving the Navy to take up a job as a Military Advisor for a Company in Canada, training Military and Law Enforcement Diving Teams around the World to conduct specialist diving operations using rebreather diving equipment and is currently still employed in this role.