Anyone who has ever watched the television programme The Antiques Roadshow will know all bout the different ways in which valuables can turn up unexpectedly.

I’m a big fan of the show and have watched it for decades. I particularly enjoy the occasions when a valuable item turns out to have been bought for peanuts at a car boot sale - or picked up for nothing at the local tip or charity shop.

Interestingly, I had a very similar moment when I came across some Pedro Postcards at a valuation day I conducted in Exeter in 2009.
A couple, who were originally from Wiltshire, owned a skip rental business and always made a point of trawling through collected full skips - partly for recycling purposes, but also for the purpose of searching for items of value. In the past, they had discovered items of jewellery, some which were even made of gold. However, what they showed me at Exeter was far more exciting (as far as I was concerned) because they were original works of art from the ‘Sunny Pedro Postcards’ series by well-known artist Phil Millar. 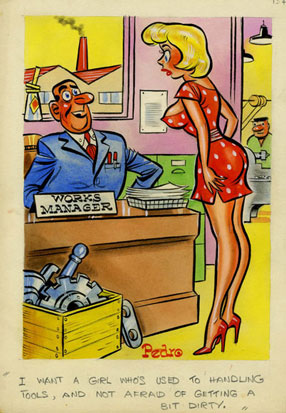 Millar was a commercial picture postcard artist who used the penname of ‘Pedro’ and produced a large series of saucy seaside humour postcards in the 1960s. He took over where the Donald McGill saucy postcards left off and, in the more relaxed atmosphere of the 1960s, produced far more suggestive cards than ever McGill could get away with.
According to the British Cartoon Archive compiled by the University of Kent, Millar started his professional cartooning career in the 1930s as an illustrator for men's magazines. His work appeared in Razzle, Blighty and in the Daily Mirror. He began drawing seaside postcards in the late 1940s.
Having used a number of pseudonyms based on his name, his seaside postcard humour was first published by E. Marks (1948-49) as ‘Pip’, before Joseph Easton and Co (1948-1951) did so as ‘Milla’. Millar published his work as ‘Davo’ from 1951. He took over from McGill at D. Constance following McGill’s death in 1962, and was published as ‘Pedro’, ‘Carlos’, ‘Bob’ and ‘Flip’ from 1964 onwards. He died in Norfolk in 1988. 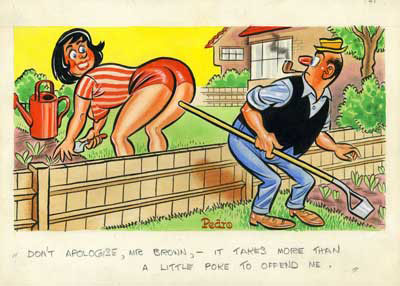 My client found 25 original artwork paintings in a skip by Millar, from which the postcards were printed, it was a discovery which could definitely have graced The Antiques Roadshow itself.
Pleasingly, the paintings for the Pedro comic postcards had all survived their passage in the skip very well and, apart from a few Sellotape stains around the edges, the paintings were as fresh as the day they had been painted.
Although the Pedro postcards themselves are quite common - and can be picked up for less than £1 each, each piece of artwork discovered was truly unique and I had no hesitation in telling the couple that I would estimate them conservatively at £50 each, making a total figure of £1,250. 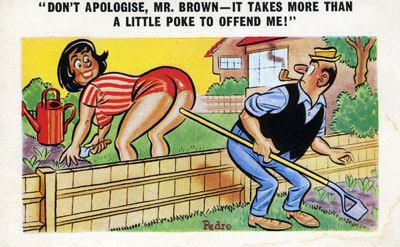 Every postcard in the ‘Sunny Pedro Postcards’ series is numbered and whenever this happens, it seems to act as a carrot to collectors, who know they can have a chance to complete the series.
When sold in our August 2009 auction, they were lotted individually and realised between £46 and £150 each – proving the saying that one person’s rubbish is another person’s treasure!

If you own a collection of old or rare postcards and you want a free valuation, please get in touch - our experts will be happy to offer their help and expertise.