The 1841 Notice to Postmasters 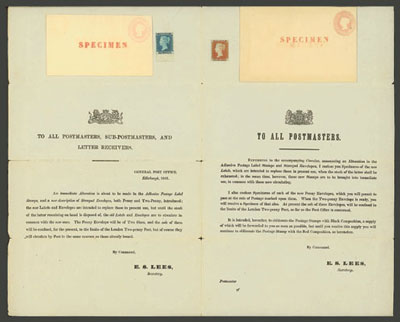 As everyone knows Rowland Hill’s postal reforms of 1840 were a huge success, especially the introduction of “postage labels” or stamps. In fact the adoption of stamps, as opposed to postal stationery, by the general public, was so great that the authorities were seriously concerned that unscrupulous people would devise ways of removing the cancellation from used stamps and reusing them, thus depriving the Post Office of revenue. The Post Office changed the colour of the cancelling ink to black, to make it more difficult to remove. However they found that a black cancel on a black stamp was difficult to see, so they decided to change the colour of the 1d. stamp from black to red. At the same time it was decided to modify the design of the 2d. stamp, with the addition of two white lines and change the much derided Mulready stationery for less fussy designs.

The next step was to inform the thousands of postmasters of this decision and to send them copies of the new stamps and postal stationery so that they could be recognised by them once they had been issued and in general circulation. It was decided to send a circular to all Postmasters, Sub-Postmasters and Letter Receivers from E.S.Lees, the secretary of the General Post Office, in Edinburgh., with the new stamps and stationery affixed to it.

On the December 30th 1840 sheets of the new 1d. stamp, printed in red were ready, as was the new postal stationery; however the plate to print the new 2d. stamps was not finished and for the purposes of sending out the Notice to Postmasters a small plate was made, which comprised 12 impressions, in 3 horizontal rows of 4, but unlike the stamps to be issued, the lower corners were without check letters. A horizontal pair from one of these sheetlets of 12 was offered in the Warwick and Warwick November 1st 2006 sale, where it realised £1,437. 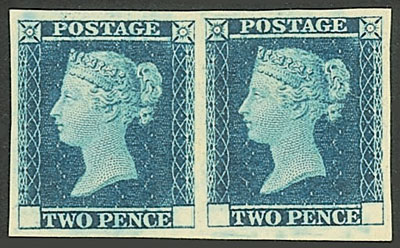 The text of the Notice to Postmasters is as follows:

TO ALL POSTMASTERS
Referring to the accompanying Circular, announcing an Alteration in the Adhesive Postage Label Stamps and Stamped Envelopes, I enclose you Specimens of the new Labels, which are intended to replace those in in present use, when the stock of the latter shall be exhausted; in the meantime, however, these new Stamps are to be brought into immediate use, in common with those now circulating. I also enclose Specimens of each of the new Penny Envelopes, which you will permit to pass at the rate of Postage marked upon them. At present the sale of these Envelopes will be confined to the limits of the London Two-penny Post, so far as the Post Office is concerned.
It is intended, hereafter, to obliterate the Postage Stamps with Black Composition, a supply of which will be forwarded to you as soon as possible, but until you receive this supply you will continue to obliterate the Postage Stamp with the Red Composition, as heretofore.
By Command, (signed) E.S. LEES Secretary

The text of the circular on the adjacent sheet is as follows:

TO ALL POSTMASTERS, SUB-POSTMASTERS, AND LETTER RECEIVERS.
GENERAL POST OFFICE, Edinburgh, 1841
An immediate Alteration is about to be made in the Adhesive Postage Label Stamps, and a new description of Stamped Envelopes, both Penny and Two-Penny, introduced; the new Labels and Envelopes are intended to relace those in present use, but until the stock of the latter remaining on hand is disposed of, the old Labels and Envelopes are to circulate in common with the new ones. The Penny Envelope will be of Two Sizes, and the sale of them will be confined, for the present, to the limits of the London Two-penny Post, but of course they will circulate by Post in the same manner as those already issued.

The Notice to Postmasters is a rare document: two are in the National Postal Museum and the Royal Collection contains one. Warwick and Warwick are proud to have offered one in the November 1st 2006 sale, where it realised £3,680.