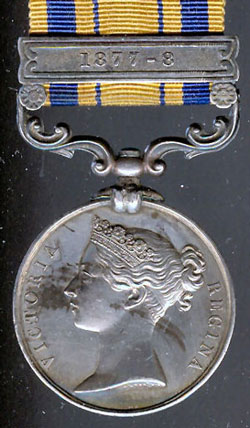 Lord Chelmsford marched out of the camp at Isandhlwana at about 0430 on the morning on the 22nd January 1879, with 6 companies of the 2/24th Foot, 4 of the 6 artillery 7 pounder guns and various colonial and native troops, to go to the aid of Major Dartnell’s force, who, it was believed, had found the advance elements of the main Zulu Army in the area of the Mangeni Valley, some 10 miles to the south-east of Isandhlwana.

Lt Pope’s G Company, 2/24th Foot, did not accompany the rest of the battalion because they had been on picquet duty during the night and it was decided that they should remain in camp for a rest. As Chelmsford’s column marched out, it exchanged good-humored banter with Pope’s picquets who were stationed three quarters of a mile out from camp, in sections of 4 men, spread in a line about half a mile long. The column told Pope’s men they were going to miss all the action, as they were off to defeat the Zulus. How wrong would they be! So, by a stroke of misfortune that was to cost them all their lives, they were left in camp.

Lt Pope was 29 years old and commanded the only company of the 2/24th Foot present at the battle, the other 5 companies being from their sister battalion, the 1/24th Foot. Also remaining in camp from the 2/24th Foot were the Regimental Colours, Bandmaster, some drummer boys and no doubt a few other strays.

As the opening skirmishes of the battle developed, G Company was posted on the extreme right of the infantry line facing down the valley with Isandhlwana hill at their back. The early fighting and maneuvering of the Zulu army were completed up on the Nqutu Ridge and beyond, which was out of sight of the British camp. The first sight that the troops in camp had of the enemy was about 1130, with the ominous sight of thousands of Zulus suddenly descending from the Nqutu ridgeline. The troops in camp were fallen in as the approaching warriors were recorded as “approaching like swarming bees”.

By about 1330 the camp had fallen and the bulk of the troops were dead, with a trickle of men trying to make their escape down what has become known as the Fugitive’s Trail, where many were killed in their last desperate attempt to escape. There was not one survivor from the 6 infantry companies deployed in the firing line. They were engaged to good effect against the attacking forces and a number of times the Zulu attack seemed to stall, but eventually they worked themselves close enough to the British line to charge home and overwhelm the line and the fate of the British infantry was sealed. 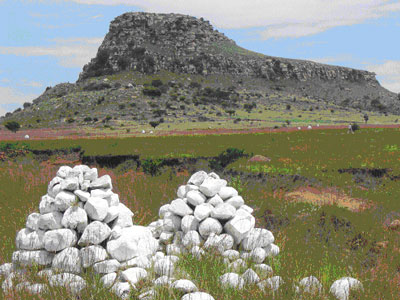 Cairns placed above buried soldiers cover the battlefield, indicating the huge area over which the battle was fought. This photo was taken near where it was thought some of G Company personnel finally fell, with Isandhlwana hill in the background.

Over the years, blame has been placed on several people’s shoulders for the infantry being deployed too far from the camp and stretched too thinly against a foe such as the Zulus whose “Horns of the Buffalo” tactic was well know, and the only reliable form of defence against this tactic was a laager defended on all 4 sides which could not be outflanked.

1097 Pte Abraham Jones enlisted at Pontypool on 20th January 1877 and was killed in action 2 days after the anniversary of his enlistment. His effects were claimed by his mother, brother and sisters. 176 members of the 2/24th were killed in action at the Battle of Isandhlwana, making this a rarer casualty medal than that to the 1/24th. The Medal roll states he was issued the 1877-8-9 clasp, but there are a number of anomalies with the issue of this medal and its clasps and the family may have realised this at the time.