The Battle of Balaklava, fought on 25th October 1854, was an attempt by the Russian Army to raise the siege of Sebastopol and threaten the Allied position around the vital port of Balaklava. The main line of defence for Balaklava was the Causeway Heights, to the north, which had a line of redoubts manned by Turkish troops and artillery. The opening phase of the battle involved Russian infantry and cavalry assaulting the Number 1 redoubt and, after suffering 50 percent casualties and receiving no support, the Turks abandoned their position and retreated towards Balaklava. The Turks in the other redoubts, seeing the Russians forming to attack their positions, also retreated.

The soldiers of the 93rd were the last line of defence before the port. General Sir Colin Campbell, commanding the troops defending the port, ordered Colonel Ainslie, commanding the 93rd, to spread out his men in two thin ranks so as to cover as wide a front as possible, rather than a square, the usual formation for infantry to receive a cavalry attack. As a detachment of 400 Russian cavalry broke away from their main body on the captured Causeway Heights and made for the port, General Campbell addressed the scarlet and green-clad ranks: “Men, there is no retreat from here; you must die where you stand!” Private John Scott replied “Aye, aye, Sir Colin; and needs be, we'll dae that!”

The Highlanders’ volleys took the impetus out of the Russian charge and they veered to their left as if to outflank the 93rd. The Grenadier Company faced to meet the threat and poured volley after volley into the cavalry flank. This was enough for the Russians who retreated and the port was saved. 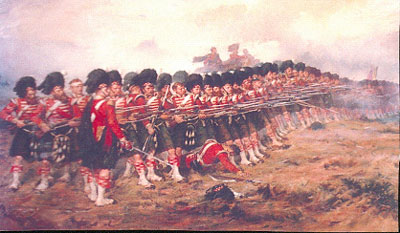 "The Thin Red Line" - The 93rd Sutherland Highlanders at The Battle of Balaklava. (From a painting by Robert Gibb)

A Mrs Duberly, who observed the attack, later wrote:

“Presently came the Russian Cavalry charging, over the hillside and across the valley, right against the little line of Highlanders. Ah, what a moment! Charging and surging onward, what could that little wall of men do against such numbers and such speed? There they stood. Sir Colin did not even form them into square. They waited until the horsemen were within range, and then poured a volley, which for a moment hid everything in smoke.”

The correspondent, William Russell, likened the 93rd Foot to ‘a thin red streak tipped with steel’. For their glorious exploits, the 93rd have since been famous as ‘The Thin Red Line’.