The Birth of the Postcard

Most serious collectors of early Great Britain postcards will be aware of 3 important dates, relevant to the history of postcards in this country. The first date is 1870 when the British Post Office published “official” postcards, bearing a printed “stamp” on the reverse and no illustration on either side. The second date of significance is 1894, when private postcards were allowed through the post, as long as they bore a current ½ d. adhesive stamp. This date is regarded as the official start of the picture postcard in this country. The third date, of course, is 1902, when the post office relented to pressure and allowed the postcard manufacturers to divide the back of the card and use only half of the card for the address, thus freeing up the whole of the other side for an illustration.

Whenever the Post Office changed the rules relating to what was or was not acceptable, it was necessary to inform their postmasters at the thousands of post offices around the country and the natural way to do this was via the mails. The “Post Office Circular” was, as its name suggests, the document that was used and the circular no. 1045, dated August 28th, 1894, was the one that contained details of the change in the rules that led to the birth of the picture postcard in this country.

The “Post Office Circular” was a flimsy 8 page newspaper style periodical, designed to inform the staff and then be thrown away and very few from this period have survived. It is quite remarkable that amongst a general accumulation of Victorian and later ephemera handed in for auction at Warwick, a copy was found and, even more remarkable, that the front page news item in this particular issue was about the “Private Postcards” rule change.

The feature commences “On and after the 1st of September next the public will have the privilege of sending through the post, as postcards, private cards bearing halfpenny adhesive stamps.” It continues to explain the regulations governing the size and thickness of the cards and the fact that the warrant gives rather more latitude than the warrant which it supersedes with regard to the rules for the address. The word “Postcard” on the address side is not objected to. It explains that infringement of the rules will render the card liable to letter postage.

This interesting circular was offered in the June 21st 2006 Collectables auction, where it realised £69. 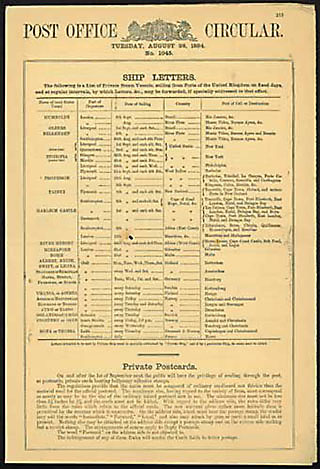