The Boxers were a Chinese group called the "The Society of Righteous and Harmonious Fists", formed by peasants in northern China in 1898, who revolted against the imperialist policies of the western colonisers and against their Christian missionary evangelism. At first the Chinese government hesitated, but after armed foreign landings, the Dowager Empress Cixi sided with them and the foreign legations in Peking (now Beijing) came under siege in June 1900. In order to relieve the siege of the legations, an eight nation alliance of western powers assembled a force of 30,000 soldiers, mainly made up from the Indian army. It was called the China Expeditionary Force (C.E.F.) and was effective in ending the 55 day siege and defeating the Boxer rebellion. The final peace settlement was signed in September 1901 and this allowed foreign troops to occupy key Chinese cities to safeguard the ex-patriot civilians.

This force was sufficiently large to justify the establishment of a field post office system to handle the mail. Initially Indian stamps were used on outgoing letters, from the arrival of the troops on July 23 1900, and mail thus franked is rare. On August 16 1900 Indian stamps and postal stationery overprinted C.E.F. were introduced to combat currency speculation, their validity being restricted to use by the Field Force. The postal rates were the same as those prevailing in India and the rate to India was the same as the Indian internal rate. Official stamps were not overprinted as they were not for public use. A base office was located at Liu Kung Tau (Wei-Hai-Wei), which was later transferred to Hong Kong. Other bases were at Tientsin and Tonku. There was provision for 19 field offices, with FPO numbers from 1 to 20, though some may not have been opened. 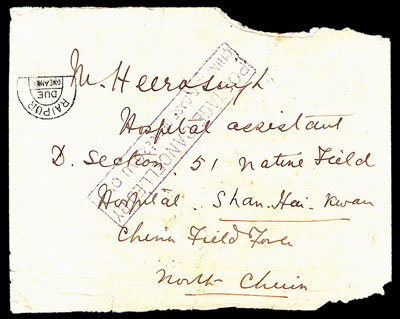 A collection that passed through our auction rooms in June 2013 included covers from several of the FPOs, but for me the most interesting item was an incoming envelope addressed to an Indian hospital assistant at the 51 Native Field Hospital at Shan-Hai-Kwan. It was mailed on August 7 1901 from Raipur in India, without stamps. On the front of the envelope was the Raipur 1 anna postage due handstamp and on arrival in Hong Kong it received the large framed rectangular postage due handstamp of the base office "POSTAGE CANCELLED BY / CHINA E.F. BASE OFFICE 26 AU. 01." The reverse carried the receipt F.P.O. No. 6 c.d.s. of Shan-Hai-Kwan. This postage due strike is scarce and it is a shame that the cover was not in better condition.

In 1906 the majority of the Chinese Expeditionary Force was withdrawn from China and after that date only 4 field post offices continued to function. The final withdrawal of C.E.F. troops did not take place until November 1923.