The City Posts of Germany

The City Posts of Germany, an account of a comprehensive collection of issues sold in a Warwick & Warwick auction on 7th March 2012.

The city posts of Germany were formed as a result of the wording of the postal acts of the North German Confederation in 1867 and the federal act passed in 1871. This latter act established the Reichspost at the time of the federation of the German States. The acts provided a monopoly for the state on the delivery of mail between towns with post offices, as long as it was sealed. The Reichspost was not initially concerned with inner city deliveries, nor with the delivery of parcels, printed papers, unsealed letters and postcards. Such a vacuum allowed private enterprise to step in and provide a service, which became increasingly necessary as the industrial cities expanded at the end of the 19th century. The postcard was accepted as a means of communication only from 1872 in Germany and the postal authorities did not foresee the extent to which it would be used.

The private posts were initially slow to rise to the challenge and the first company to form a service in Berlin was J.J. Schreiber’s Brief und Druckschriften-Expedition, which started in May 1873. The rate for cards and wrappers was 2 pf up to 125 gm. Schreiber’s company was the first to introduce advertising stationery cards, which the Reichspost did not introduce until 1889. Postal orders or “mandat” were also introduced. However an economic crisis in Berlin led to the closing of Schreiber’s business in August 1874. 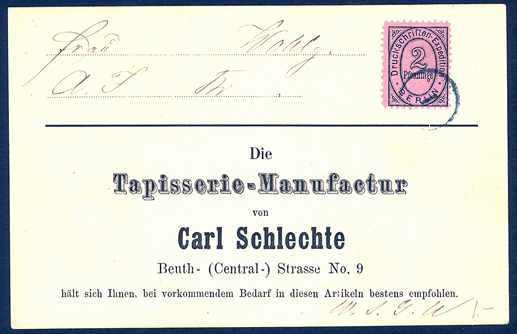 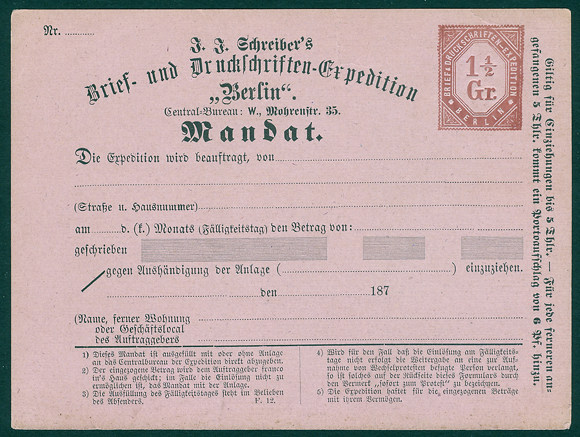 Mandat or postal order of the Brief und Druckschriften-Expedition

Commercial development began to increase again around 1880, when Berlin’s population began to expand. In 1884 the very successful company Berliner Packetfahrt-Gesellschaft was formed. 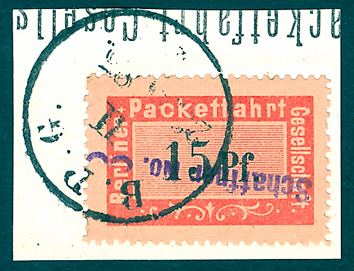 By September 1885, in co-operation with other firms, an inter-city parcel delivery service had been formed with the name Express-Packet-Verkehr. It expanded rapidly, even offering overseas delivery. In 1886 the name was changed to Neue Berliner Omnibus und Packetfahrt Actiengesellschaft. Stamps were used on parcels from the outset, but it was not until June 1886 that stamps were produced for use on letters and postcards. This move coincided with the opening of a delivery service by a new competing firm Hansa I. The volume of letters and printed matter carried by the Packetfahrt in Berlin increased dramatically, mainly because it was able to undercut the rates charged by the Reichspost. By 1895 the company employed more than 1500 people. Many of the private city posts of Germany produced stamps more with an eye to philatelic sales than practical necessity, but that was not totally the case with the Berlin Packetfahrt, who showed restraint with their output. However they did produce some commemorative issues, including a novelty postal stationery card celebrating the 10th accession anniversary of the Kaiser, incorporating a celluloid portrait which could be viewed from either side. 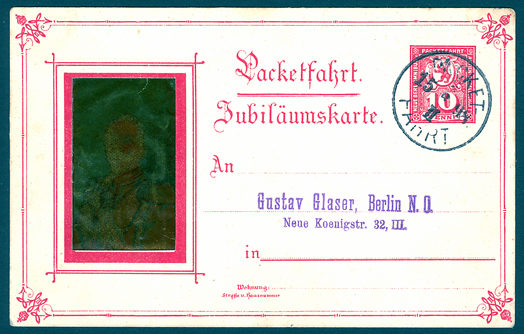 From 1887-8 they also produced attractive New Year cards and envelopes. 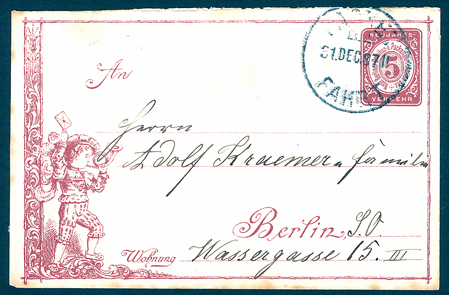 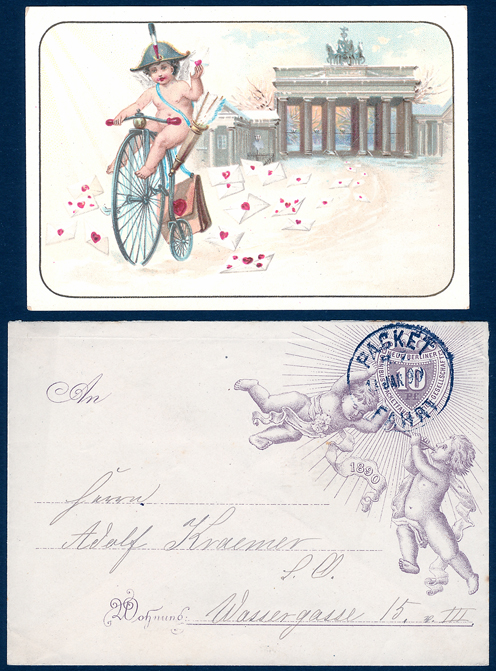 A number of private post firms were established in Berlin, in competition with the Packetfahrt but most were short-lived and unsuccessful. However the Berliner Privatpost und Spedition AG, established in 1895 was well organised and introduced a number of new services, including inner city delivery guaranteed within one hour for just 10 pf. In order to ensure its dominance in the market the Packetfahrt bought out the company. 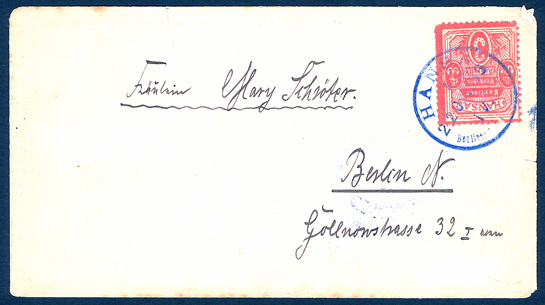 Envelope conveyed by the HANSA post, set up in opposition to the Berlin Packetfahrt. The stamp is applied upside down 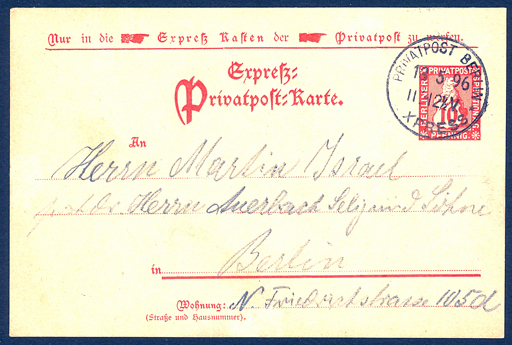 1896 express postal stationery card issued by the Berliner Privatpost und Spedition AG with a timed postmark. Delivery was guaranteed within one hour

Private posts were banned by the government on April 1st 1900. The Reichspost, together with the Bavarian and Wuerttemberg Posts had to pay compensation to the existing 74 companies totalling 8.2 million marks, 3.6 million marks going to the Berlin Packetfahrt. This was not the end of the company however, as they continued for a further 60 years with activities which did not infringe the law such as the delivery of unaddressed mail and parcels.

In Hamburg the private posts started in the 1860s but the so-called Boten issues of stamps were printed in vast numbers to sell to philatelists. Forgeries also exist in substantial numbers. From 1872 to 1874 H. Maack ran a genuine commercial service in Hamburg and Altona and the stamps he issued are quite rare. These were the first adhesive stamps issued in Hamburg. 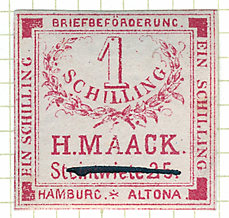 From 1886 the requirement for inner city post increased dramatically as the sea port expanded and a number of delivery firms sprang up, the most significant being the Hammonia Stadtbriefbefoerderung. 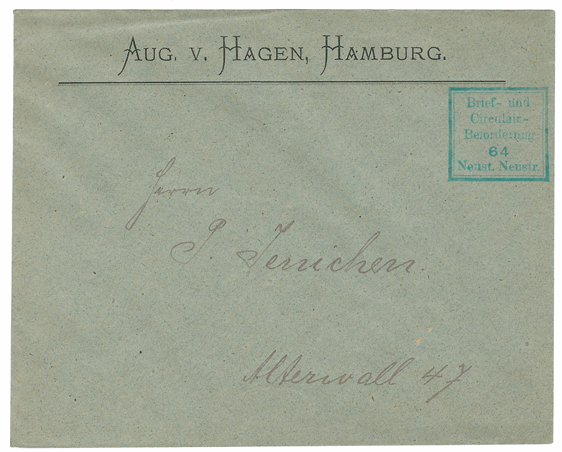 1896 experimental introduction of the Brief und Circulair Befoerderung CITO. This is the only known cover bearing this handstamp 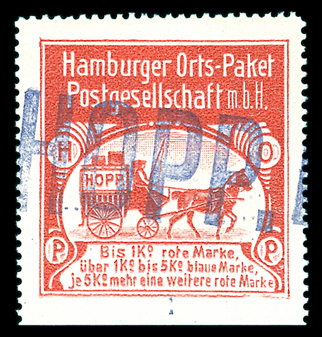 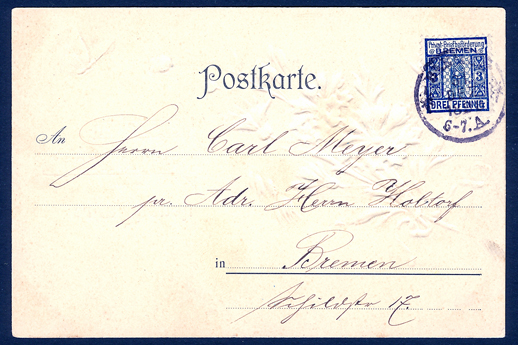 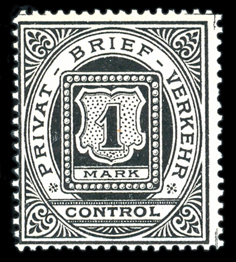 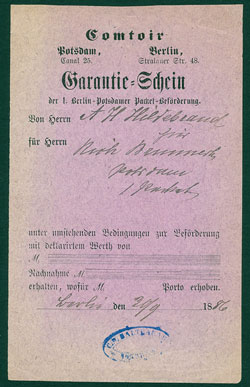 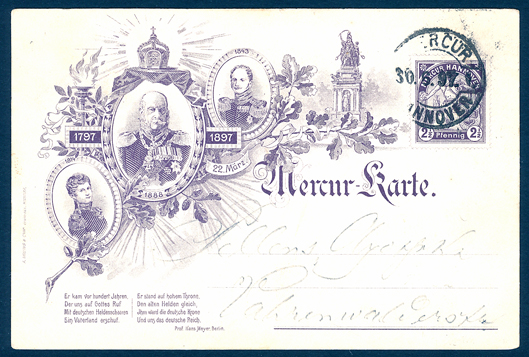 Abschiedskarten or “farewell” cards were published by some companies when the Reischspost terminated their activities in 1900. This stationery card was conveyed by the Stadtbrief-Befoerderung Courier in Munich 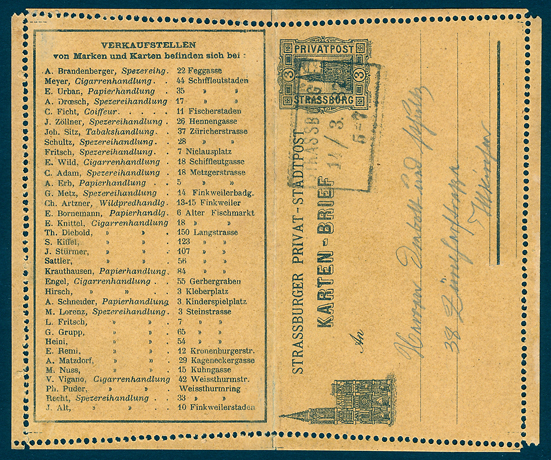 An 1887 3 pf lettercard conveyed by the Strasbourg city post. The reverse lists 35 retailers where the stamps and stationery of the city posts can be purchased

When the act was passed, on April 1 1900, granting a monopoly to the Reichspost, companies that could show that they had been trading profitably prior to April 1 1898 were compensated for loss of potential profits for the next 10 years. This level of compensation was generous and shows how successful the private sector had been.

As a gesture to the public, who had been enjoying cheaper postcard rates with the private posts, the Reichspost reduced its postcard rate from 5 pf. to 2 pf. However this largesse did not last long, as is shown by the privately printed 2 pf postal stationery card below. The Reichspost postman is smiling benignly at a tearful Hermes about to post his postcard in a Hamburg postbox dated 30th June 1906. The caption translates as “Last greetings from the last 2pf postcard.” Clearly rates were on the rise once the monopoly had been achieved! 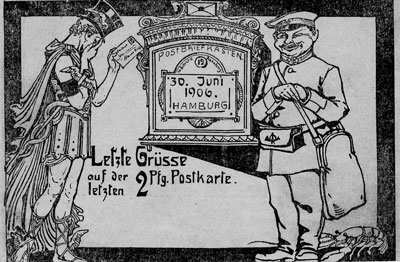