The "Empress of Ireland" Tragedy 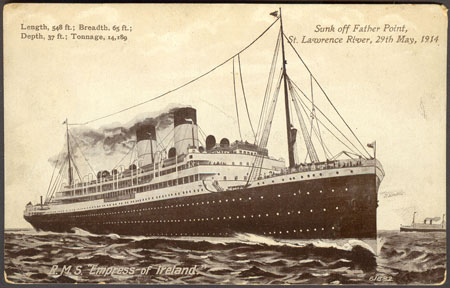 If maritime disasters are mentioned, the first ship to come to mind is usually the "Titanic". However there was a further transatlantic liner that sank with enormous loss of life only 2 years later. The SS "Empress of Ireland" was bound for Liverpool out of Quebec, on May 29th 1914, when, in the St. Lawrence Seaway, in Canada, she encountered dense fog. The Norwegian collier, "Storstad", was bound for Montreal, travelling in the opposite direction. There was no radar at this time and although the 2 ships knew they were close, the "Storstad" failed to slow down sufficiently and collided with the "Empress of Ireland", resulting in a large gash in the starboard side of the liner, below the waterline. The liner sank within 15 minutes of the collision, within sight of land. The collision occurred at 1.55 am and the majority of the 1,467 persons on board were in their berths asleep. They stood little chance of escape, only a few finding their way to the upper deck. Because of the listing of the ship only 4 lifeboats could be launched and over 1,000 lost their lives.

The ship had sunk in relatively shallow water, not far from shore and as it was carrying £200,000 worth of silver bullion, the underwriters decided to carry out salvage operations. Much of the mail was recovered, dried out and handstamped with the cachet “Recovered by divers from the wreck of SS Empress of Ireland”. The reverse of the covers were date stamped with the oval stamp of the Dead Letter Office in Ottawa, from where the recovered mail was transported to the recipients. 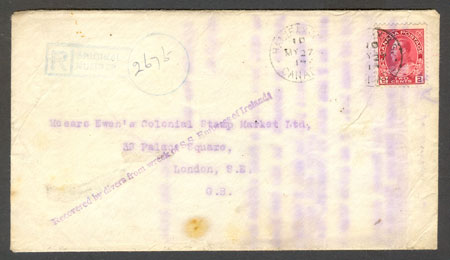 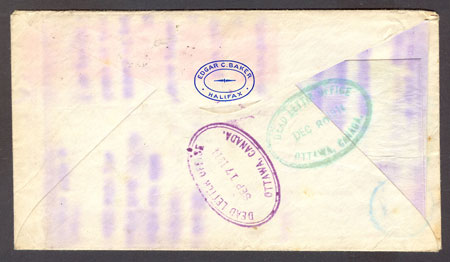 A recovered cover from the Empress of Ireland disaster, addressed to London, was sold in our September 2009 auction and realised £92.