The Enigma that is the Cape 4d. black Triangular

One of the rarest stamps in the British Commonwealth is the Cape of Good Hope 4d. black triangular stamp, of which only 12 copies have been authenticated. However no-one knows for certain how the stamp came to be issued. It was printed by Perkins Bacon & Co. on white, watermarked paper which was in use for printing the issued 1d. red and 4d. blue stamps of 1855-63. Knowledge of the existence of the stamp in December 1861 is provided by the fact that it was listed in a French catalogue (Alfred Potiquet) of that date. However, by 1865 collectors, including the eminent Philippe von Ferrary, were of the opinion that it was a colour changling, perhaps caused by immersion in seawater, whilst others were confident that it was a genuine shade. 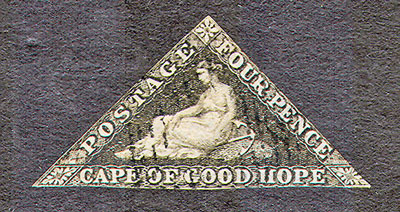 At the 1878 Paris Congress, one delegate declared that the 4d black, which he had in his collection, was a specific limited issue of 300, ordered by the Governor of the Cape, in mourning for the Prince Consort who had died in December 1861. He understood that they were on sale for 8 days only. However it was pointed out to him that the plates for printing the stamps remained with Perkins Bacon in London.

In 1924 Edward Denny Bacon acquired a copy of the 4d. black for the Royal Collection. He dismissed the story of the stamp being printed as a mourning issue, as it would have been necessary to print the stamp in London and it would have taken 2 or 3 months for the stamps to reach the colony, by which time the reason for their issue would have passed away. His theory was that a sheet or two of black stamps had been sent to the Postmaster General, in 1853, as proofs, to show him the appearance of the issued stamps. When the Governor of the Cape suggested a mourning issue, the Postmaster realised the impracticability of such an issue, but recalled he had these black proofs lying around, which he handed over for the Governor to use on his official correspondence. Against this theory is the fact that the 4d. black is on white paper and the first issue printed by Perkins Bacon in 1853 was on blued paper. A more compelling arguement than that, however is that despite the fact that the Prince Consort died on December 14th 1861, news of his death did not reach The Cape until January 30th 1862, a few weeks after the publication of Potiquet’s catalogue, listing the black stamp.

In 1932 a collector suggested that the 4d. black may have been printed in connection with experiments in perforating stamps, though this theory did not gain much popularity, as the evidence for it remained somewhat nebulous. In 1941 it was suggested that the black stamp was printed merely as wrapping paper in which to despatch the issued stamps and that it may have been used in times of shortage of the 4d. blue stamps, but an employee of Perkins Bacon stated that that was not the custom.

The Williams brothers, writing in 1941 and L.N. Williams writing in “Stamp Collecting”, in 1979, advance the most likely theory that the 4d. blacks were proofs of the watermarked paper, sent to the colony, which were requisitioned and used as stamps during the 1861 shortage which lead to the local issue of the “Woodblock” stamps. They state “the bottom of the barrel was being scraped in an endeavour to meet the crying need for stamps.”

Warwick and Warwick offered one of these famous stamps in their November 1st 2006 auction. This lightly used example, which was originally in the Burrus collection, realised £7,475