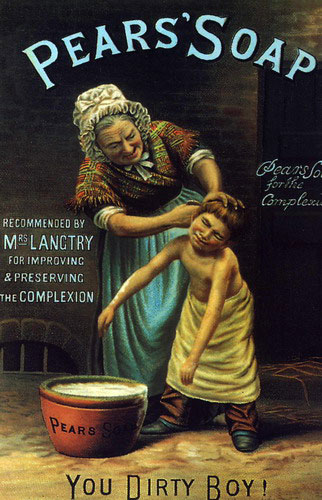 A typical Pears Soap advert of the late 19th century. 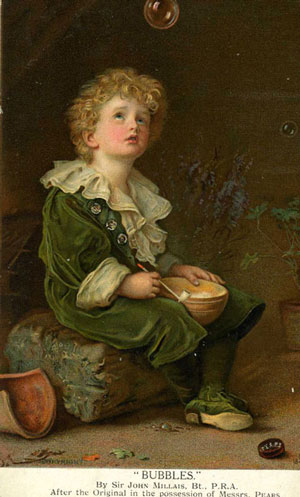 The iconic “Bubbles” postcard, showing an addition of a bar of Pears Soap to the painting by Millais.

Pear’s Soap, under the guidance of Thomas J. Barratt, were prolific advertisers of their product in the late nineteenth century and Barratt is widely regarded as being the father of modern advertising. Pear’s Soap posters, enamel signs, picture postcards, etc., are well collected as icons of Victorian sentimental art. Indeed, the well-known postcard of “Bubbles”, the adaptation of a painting, by Millais, of a boy blowing soap bubbles, with a bar of Pear’s Soap lying at his feet, is a common postcard that can be picked up for pence. However the same cannot be said of the venture by the company into the realms of advertising their product on postage stamps. 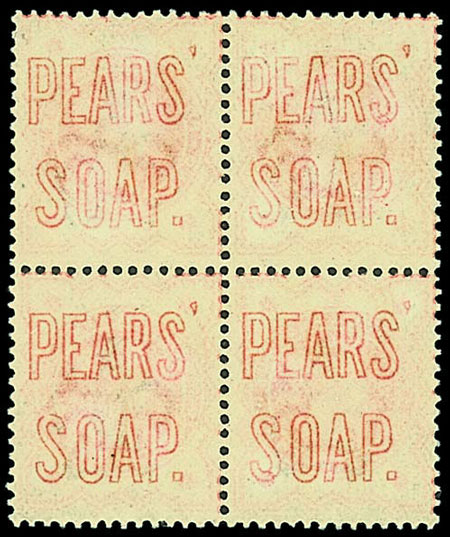 Around 1889, the company De La Rue, who held the contract for printing postage stamps, were requested by the Postmaster General to investigate printing advertisements for Pear’s Soap on the backs of stamps. As a trial, they printed the words “PEAR’S SOAP”, in double-lined capitals, in mauve, under the gum, on the backs of the 1881 1d. lilac and the 1887 Jubilee ½ d. vermilion. The records show De La Rue reported difficulties with the task and the Postmaster General never proceeded with the idea. Occasionally examples appear on the market and Warwick and Warwick’s sale of March 2008 saw a block of four of the ½ d. vermilion realise £920. 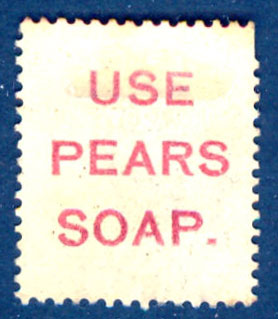 The enigmatic “USE PEARS SOAP” advert on the reverse of the 1881 1d. lilac.

However, Pear’s Soap appear not to have accepted that all was lost and they themselves conducted their own trials. Examples are recorded of “PEAR’S SOAP”, in the same double-lined capitals, in orange, blue and mauve, but this time printed on top of the gum. A further overprint, “USE PEARS SOAP”, in red solid capitals has been recorded on both stamps, but W. A. Wiseman, in his 1984 book The De La Rue Years, 1878 – 1910, labels them as fakes. In 2008 we offered a 1d. lilac with this latter overprint. It had a David Brandon 1978 certificate of authenticity. Wiseman argues that as the solid overprint has so far only been recorded on used stamps it cannot be genuine as it must have been applied over the gum, on sheets of stamps supplied by the printers and the action of licking the stamp would have removed the lettering. This I find difficult to believe, as I feel there would have been paper penetration by the ink, even if the overprint had been applied on top of the gum. Another point to bear in mind is the fact that only a handful of them have ever appeared on the market and if a forger was producing them for monetary gain, he or she has been spectacularly unsuccessful to date.

My explanation, for what it is worth, is that this was a period of experimentation, trial and error on the parts of the Post Office, De La Rue and Pear’s Soap and that one should not be surprised at finding all manner of strange items. Indeed, the 1d. lilac is known with “One Penny” overprinted on the reverse and the ½ d. vermilion with “Half- Penny” on the reverse, both printed under the gum. These are not mentioned in the De La Rue records, but they are believed to be something to do with the Pear’s Soap experiment. Perhaps Pears were responsible for these too, but why? What a wonderful area for further research!