One of the lesser known reforms of Rowland Hill in 1840 was the abolition of the free franking privilege enjoyed by members of parliament and other government officials. It had been common practise for members of parliament to give out to friends signed blank sheets of paper on which they could write their letters, fold them and place them in the post free of charge. MPs were even appointed to the boards of large companies in order that both the outgoing and incoming mail could enjoy the free franking privilege.

Although free franking existed from the middle of the seventeenth century, it was not until 1764, when the Post Office revenues passed from the Crown to the State, that the first handstamp was introduced in England. 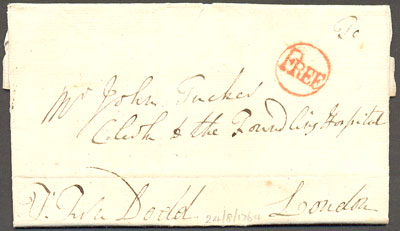 This first type consisted of a circle containing the word “FREE” in capital letters, with the “F” larger than the subsequent letters. It was applied in London, in red, between 1764 and 1766. A subsequent type, introduced in 1765 had letters of uniform height and is more common. 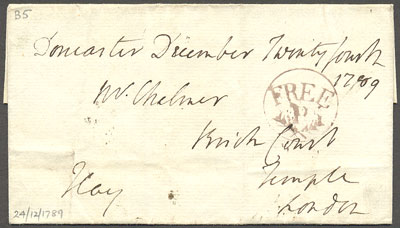 More elaborate handstamps were introduced from 1787, incorporating the initial of the Inspector of Franks on duty. Three different designs exist with the monograms C, S, A or P, standing for Messrs Colston, Stafford, Addison and Palmer. From 1797 onwards the monogram of the inspector was omitted and various handstamps were introduced incorporating the date. 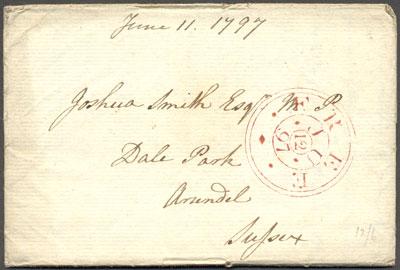 From 1797 to 1799 evening duty, as opposed to morning duty, was distinguished by a handstamp with a double outer ring. This distinction was again made in the handstamps used from 1806 onwards. 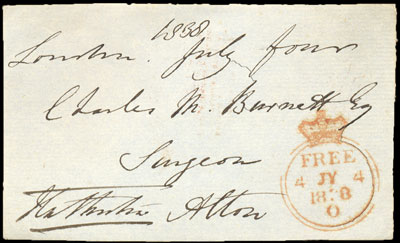 A free frank which has created a great deal of controversy is the crown above double circle with “O” below the date slug. James Grimwood-Taylor, in his article in “The London Philatelist” of October 1999, convincingly argues that this strike was applied by favour posthumously to free fronts collected by autograph collectors of the 1840s and 1850s, seeking to make more presentable signed fronts which had not received a postal marking. Very few examples exist and those that do are on fronts rather than entires.

The Foreign Office used a different design of handstamp to indicate free franking, incorporating a rectangle rather than a circle. Two different versions exist and both are rare, as the free franking privilege to and from overseas addresses was given to very few officials. 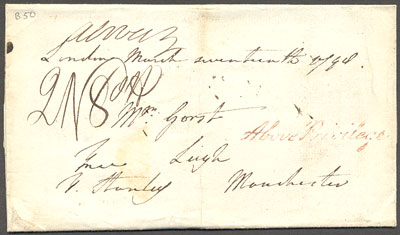 The abuse of the free franking system was so enormous that the government sought to control it in 1795. The weight limit per item was reduced to 1 ounce and each MP was allowed to send only 10 letters per day and receive only 15. A variety of instructional handstamps, such as “Above Privilege” came into use by the inspectors. The above entire sold for £299 in December 2010. 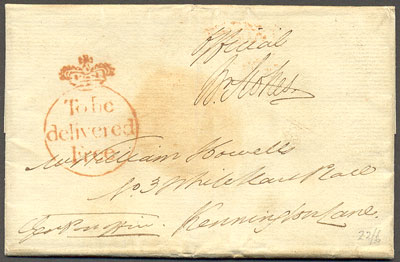 Although free franks were exempt from most charges they were not exempt from provincial Penny Post charges nor from those of the London Twopenny Post. Instructional handstamps concerning these charges were introduced from 1803 and were applied instead of the normal Free handstamp on the relevant covers. 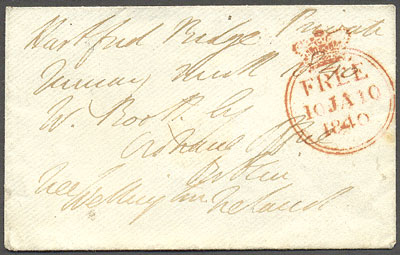 On January 10th 1840 the Uniform Penny Post was introduced and the free franking privilege came to an end. This “last day cover” realised £460 in our December 2010 auction.