One of the Rowland Hill reforms of 1840 was the abolition of free postage for Members of Parliament, a privilege which had been widely abused for a long period. Rowland Hill proposed that in addition to the 1d and 2d stamps or “labels” to be printed for public use there should be stamps printed for use by Government Departments and that the officials in these departments should be held accountable for their use. A Treasury minute of February 20th 1840 made it clear that there were to be stamps, as opposed to one stamp, for use in Government Departments and that they should differ in colour from the stamps for public use. A memo from Rowland Hill to the printers, Perkins, Bacon and Petch, on March 26th 1840 records “One plate of penny and one of twopenny stamps will be required to supply the Government Offices. They are to be distinguished from those used by the public by inserting VR in place of the ornaments used in the upper corners.”  In this memo no mention is made of the fact that the stamps should differ in colour from the public stamps and the assumption must be that the engraving of the letters “VR” was sufficient differentiation.

The engraving of the VR 1d value plate was completed on April 14th1840and 174 sheets in black were printed that same day. On April 15th worries were raised concerning the marginal inscription on the printed stamps, namely “Price – 1d per label – 1/- per row of 12 - £1 per sheet”, as the stamps would not be for sale to the general public and the inscription was unhelpful and unnecessary. The printers said that the inscription could be removed within 6 hours. Rowland Hill visited the printers the next day and decided to retain the marginal inscription and proceed with the balance of the printing. A total of 3,471 sheets of 240 were printed between April 14th and June 3rd. Although the Treasury minute of February 20th 1840 referred to ‘stamps’, there is no information in the Perkins Bacon records of when the decision was taken to abandon the idea of a 2d value Official.

As every philatelist knows, the VR 1d Official was, however, never issued and the vast majority of the sheets were destroyed. The reason for this is unclear, but it has been suggested that it could be related to the unpopularity of the Mulready postal stationery. When Hill proposed the introduction of postage stamps he also proposed the introduction of pre-stamped postal stationery and he thought that the latter would be much more popular than the former. Unfortunately the public, influenced by the press, ridiculed William Mulready’s design and the Post Office was left with a large stock of postal stationery that the public were unwilling to purchase and use. It has been suggested that this postal stationery was given to the Government Departments to use instead of printing Official stamps.

Although the VR Official stamps were never issued to the Government Departments and their use was never authorised, a number were distributed with the May 7th 1840 Notice to Postmasters and a small number of these have been found used. In unused condition the stamp is rare and unused multiples are extremely rare. Warwick and Warwick sold an unused marginal block of four, with marginal inscription, as well as an unused marginal pair, and a four margined single, again with marginal inscription, in their auction on April 8th 2015. 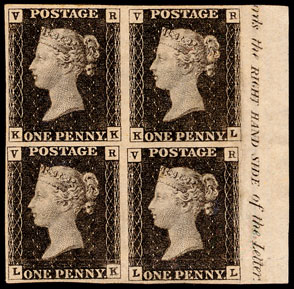 This rare and magnificent VR block of 4, with marginal inscription, realised £31,860 in the April 2015 Warwick & Warwick auction.

This attractive marginal pair of the VR Official realised £17,110.

This VR 4 margined single is enhanced by the marginal inscription. It realised £5,782 in the April 2015 Warwick & Warwick auction.