The Inverted Jenny takes off at Warwick 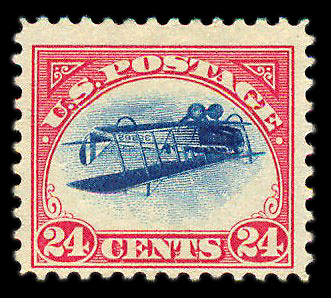 The U.S.A. 1918 inverted “Jenny” is arguably one of the three icons of world philately and certainly one of the most famous stamps in the world. Warwick and Warwick sold a mint example of this famous error, on behalf of a British client, in their March 4th 2009 auction. It realised £184,000 including the buyers premium.

The story of how this rare stamp was discovered is well known. Mr William T. Robey, a stockbroker’s clerk, was keen on sending first day covers to his friends whenever the U.S.A. issued new stamps and on May 14th 1918 he went into his local Washington DC post office to purchase several examples of the new 24c airmail stamp. The counter clerk had insufficient in stock and Robey was asked to return at midday, when a further delivery was expected. Robey returned and, when he saw the new complete sheet of 100 stamps, “his heart stood still.” The aeroplane depicted in flight, the Curtiss JN-4 Jenny, was flying upside down on every stamp! Robey quickly handed over the $24 and purchased the entire sheet. He then asked to view the rest of the sheets they had at the post office and all were normal, depicting the aircraft the right way up. Robey then visited other local post offices, but could find no other sheets with the inverted Jenny error. Realising he had a valuable find, he showed his purchase to a fellow worker, who went out looking for further errors, without success. Soon the story spread and it was not long before Robey was visited by postal inspectors seeking to repurchase the error sheet. Robey held firm and did not even show them the sheet.

The error had occurred because the stamp’s two colours were printed in two separate operations: first the sheet was passed through the presses and the red frame was printed and then the sheets were passed through a second time and the blue central image of the aircraft was printed. After the first printing the sheets would have been inspected for errors and then returned to the presses for the second printing, but at this stage, one of the sheets was fed into the press the wrong way round and the aircraft image was inverted relative to the frame. It is argued that the counter clerk who sold Robey the error would not have been aware that the image of the aircraft was inverted, as he had probably never seen an aeroplane in his life, being only 15 years since the Wright brothers’ first flight in a heavier than air machine.

The first stamp dealer to see the sheet offered Robey $500 for it; the second was Percy Mann, who offered $10,000. Robey did not accept the offers and instead took the sheet to New York on May 17th. He tried to contact Colonel Edward H.R. Green, one of the most important collectors in America, but unfortunately Green was away. Eventually Mann introduced Robey to Eugene Klein, of Philadelphia, who eventually bought the sheet for $15,000 on behalf of a syndicate consisting of himself, Mann and Major Joseph Steinmetz, President of the Aero Club of Pennsylvania. The dealer who had made the initial offer of $500 then increased his offer to $18,000, but the deal had already been done. The syndicate who bought the sheet then sold it to Colonel Green for $20,000.

Green authorised Klein to split up the sheet, numbering the position of the stamps, lightly in pencil, on the reverse, before doing so. Green retained the plate block of 8 and 3 blocks of 4 and Klein was instructed to sell the balance. Initially singles were priced at $250 each, with straight edge copies from the side of the sheet priced at $175. There is an apocryphal story that Green requested Klein to send him back a few copies to show or give to friends. These were lying on Green’s desk and ended up in the waste paper basket by mistake and were destroyed.

The copy offered in the Warwick and Warwick March 2009 auction was from position 23. The provenance was as follows:

In February 1941 Spencer Anderson advertised it for sale, at $3,500, in the journal “Stamps”. Its condition was described as “mint” and the sale was transacted at $3,000.
In June 1942 it was sold by Hugh C. Barr, of New York, for $2,100, its condition being described as “full original gum”.
In April 1943 it was offered by Phillip H. Ward, as part of the William West collection and the buyer was Carl Pelander of New York. The realisation was $1,910.
In October 1982, Harmers of New York sold it on behalf of a British collector for $52,000 + $5,200 buyer’s premium. The buyer was a British collector and the stamp has not subsequently appeared on the market.

Prior to the Harmers’ sale, the stamp was submitted to The Philatelic Foundation of New York for expertisation. The certificate they gave it is number 108068 and is dated April 23rd 1982. They describe the stamp as “genuine with a tiny thin spot covered by gum.”

This icon of world philately was offered in the Warwick and Warwick auction, held in the Court House, Warwick, on Wednesday March 4th 2009. It was estimated at £150,000. Bidding started in the room at £100,000 and six bids were recorded by the auctioneer, from six different inland and overseas bidders, until the hammer was finally brought down at £160,000. With the addition of the buyer's premium, the final result was £184,000. The buyer was British and this iconic stamp will remain in this country.