I was delighted when a longstanding auction customer, resident in the north of Scotland and who regularly attends our auction sales in Warwick, contacted me and asked whether Warwick and Warwick could handle the sale of the extensive collection of postal history, postmarks and postcards formed by the late Jack Waterman of Aberdeen: delighted, because I would be the person who would have the pleasure of lotting, valuing and describing the material.

Jack was fanatical about railways and the postal system and post offices and his collection formed a well-researched study of the postal markings of all the Scottish and most of the English counties, well written up, with attractive calligraphy and liberally illustrated with real photographic picture postcards of railway stations, post offices, harbours and street scenes. He also formed a very fine collection of the travelling post offices of Great Britain.

The collection was offered as a 200 lot named sale on 5th September 2007and given its own catalogue. To maximise the result for the vendor, it was necessary to publicise the auction not only in the philatelic press and with the Scottish philatelic societies (as Scotland was the strongest area in the collection), but also with postcard collectors. Often in Jack’s collection the picture side of the card would have as much or even more value than the postmark side.

The results from the sale were impressive, with a total realisation, including the buyers’ premium, in excess of £80,000, compared with a total pre-sale estimate of £50,000. Lots were routinely selling for double and treble estimate; this was exactly the kind of material the market wanted. The vast collection of Aberdeenshire in 60 binders was Jack’s pride and joy and it was offered intact with an estimate of £5,000 - £5,500. The hammer fell at the pleasing figure of £8,050. 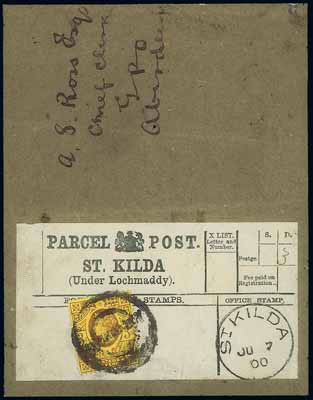 One of the biggest surprises was the collection of St. Kilda, a remote island off the western coast of Scotland, currently uninhabited. Although not a large collection, it did include a 1900 parcel post label, bearing a 3d. Jubilee, cancelled with a St. Kilda c.d.s. This was apparently from the earliest recorded parcel posted on St Kilda. The collection was conservatively estimated at £200, but the final realisation of £1,552 exceeded everyone’s expectations. 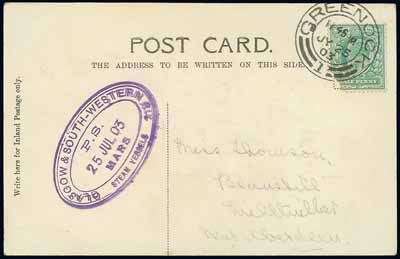 The postmarks used on mail conveyed by the Clyde steamers are well collected and a particularly rare strike is the double oval “GLASGOW & SOUTH-WESTERN RLY. / STEAM VESSELS / P.S. / 25 JUL 03 / MARS”, used on the “Mars” paddle steamer. Estimated at £50, it made £748!

Jack Waterman’s five daughters were present during the auction and it was my privilege and pleasure, as an auctioneer, to observe their reactions to the wonderful result.