The Lord Cardwell Reforms of the British Army introduced a number of major changes to the army establishment in the 1870s and 1880s, including the abolition of officers’ ability to purchase their commissions and subsequent promotions, promotion subsequently being on merit. Flogging was also banned, except on active service.

One of Lord Cardwell's main objects was to give a greater local character to the military forces by the establishment of Territorial Regiments. He linked regiments in pairs, establishing a depot for each pair and these new regiments took their titles from the county or district of their depot, so that in every possible respect, their battalions should be bound together and assimilated. One battalion was to serve at home and, by recruiting, mainly through the local depot, was to supply from year to year, drafts for the battalion abroad. With these regiments, Militia Battalions, also sharing the depot, were expected to provide large numbers of recruits to the Line Battalions.

This led to the amalgamation of the 91st (Argyllshire Highlanders) Foot and 93rd (Sutherland Highlanders) Foot in 1881 who were very briefly known as The Sutherland and Argyllshire Highlanders before the title was reversed almost immediately to the now well known Princess Louise’s Argyll and Sutherland Highlanders. The 91st Foot became the 1st Battalion and the 93rd Foot the 2nd Battalion, with the depot being placed at Stirling Castle. They were allocated the recruiting counties of Argyllshire, Stirling, Clackmannan, Dumbarton, Renfrew and Kinross. 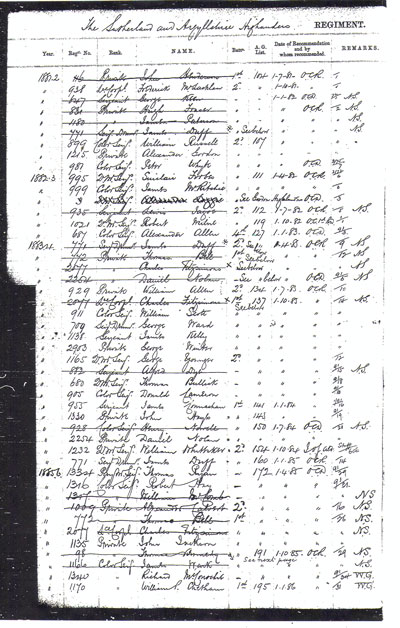 Pte A. Gordon in the 2nd Battalion is the eighth of nine on the Long Service and Good Conduct Roll for the regiment in 1881-2, with a further five awarded in 1882-3. During this period the regiment was not involved in any campaigns resulting in the award of medals and it is therefore highly likely that there are no more than 13 medals named to the Sutherland and Argyllshire Highlanders, perhaps fewer, depending on exactly what date in 1882 the Regiment’s name changed.