The Mystery of the G.B. "Treasury" Roulettes

Keeping up to date with the latest philatelic research is always desirable for an auction house such as ours. In July 2013 I read about the research findings by Ray Simpson FRPSL, on the so-called G.B. Treasury Roulettes. Little did I realise that within a few weeks I would have an opportunity to use the information.

The G.B.1852-4 Treasury Roulettes have always been surrounded in mystery. They were brought to the attention of collectors in 1897 when a philatelic writer, A.H. Stamford, wrote about them. The roulettes were serpentine roller cuts made to part sheets of imperforate G.B. 1d red stamps in order to effect separation from the sheet without the necessity for scissors. The roulettes could be regarded as the precursors of perforations. Ray Simpson effectively argues that the rouletting had nothing to do with the Treasury and puts forward the suggestion that they were privately produced and made available at one of the gentlemen’s clubs in central London. 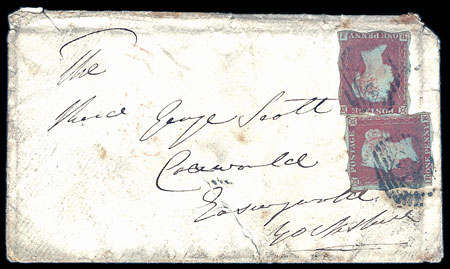 We were approached by a Bedfordshire gentleman who had an 1854 cover bearing 2 1d reds both of which apparently had serpentine roulettes around their edges. After viewing the cover we determined that the stamps were from plate 147 and that there was a good chance that they did have genuine roulettes, as this was one of the plates which was used. The cover looked “right”, not least because it was somewhat soiled and dog-eared. If someone was going to forge a treasury roulette cover they would hardly start from one which was in such a sorry state. We advised our client to allow us to send it for expertisation to the BPA. He was delighted when it came back with a “good” certificate, despite the fact that the opinion cost over £500. He realised that the cover would have been unsellable without a certificate. Interestingly this treasury roulette cover was previously unknown and only 61 other covers have been reported. We are not sure how many covers exist bearing more than one stamp, but clearly it must be a very small number. The British Postal Museum and Archive (formerly the Phillips collection) contains one cover bearing two singles and another cover bearing a pair and the Royal collection also contains a cover bearing a single, so it is in good company. The cover went under the hammer on December 4 2013 and realised £3,680.

Amazingly our vendor, Terry Stevens, acquired it for next to nothing as it was discovered amongst a miscellaneous lot bought from an agricultural auction. Terry arrived late for the auction and bid blind on a tea chest containing tractor catalogues and ephemera. On returning home with his purchase he discovered a tatty 1861 edition of Mrs. Beeton’s “Household Management” and the rouletted cover was between the pages, having seen service as a bookmark. What a find!