The Official Postcards of the Furness Railway

In the early 19th century the Furness area south of the Lake District was isolated and remote. Access to it was via a treacherous route across Morecambe Bay sands. The Furness Railway was started as a mineral railway in 1846, designed to provide a link from the slate and iron ore quarries of south Lakeland to the coast, so that the ore could be shipped directly to the markets. The port of Barrow-in-Furness was created and the town rapidly expanded. Iron and steelworks were created and the town became a ship-building centre. The railway catered also for passengers and expanded in the second half of the nineteenth century, through additional lines and company acquisitions. Through links with other lines, Furness residents were able to travel by rail country wide.

Alfred Aslett was appointed as a new general manager in the early years of the twentieth century. He took over a railway which was run down and suffered from lack of investment and falling traffic. He realised the potential of the lakes and scenery from the point of view of the tourist industry, which was rapidly expanding and sought to develop the railway as a tourist line. Steamers from Blackpool and Morecambe would bring tourists to the area and the Furness Railway would transport them to either Coniston or Lakeside, at the southern end of Lake Windermere. The company purchased steamers and ran services on both lakes. Circular excursions by charabanc were also provided, and tourists could purchase a ticket for a combined rail journey, steamer ride and charabanc trip. This proved popular, but was interrupted by the First World War. The railway emerged from the end of the war in need of further investment and the government’s 1921 Railways Act grouped all the small independent railways into 4 large companies. The Furness Railway became part of the London, Midland and Scottish Railway.

The Furness Railway relied heavily on advertising to promote its tourist line and produced a large series of official postcards, which were printed mainly by McQuorquodale and Tuck. The first series, dating from 1902, were attractive McQuorquodale chromo-litho vignette cards in 13 designs, for sale at 1d each or a set of 13 for 1/-. They exist with and without the station/pier name and with and without the overprinted phrase “Through Bookings from Principal Stations on L. & Y. Railway.” All are rare. 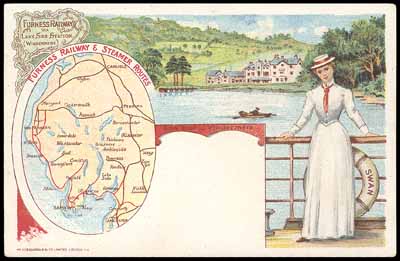 1902 chromo-litho vignette of Low Wood, Windermere and inset map of Furness Railway lines. The lady is pictured on board “Swan”, one of the company steamers on Lake Windermere. 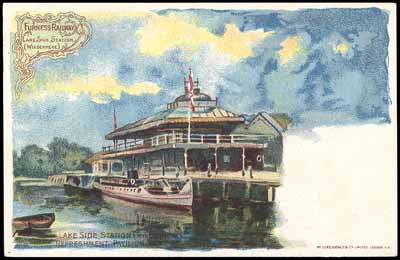 In 1906 and 1907 Tuck produced 8 series of topographical art cards for the Furness Railway, with 6 cards in each set. Most of the illustrations were by A. Heaton Cooper and the cards are reasonably common. 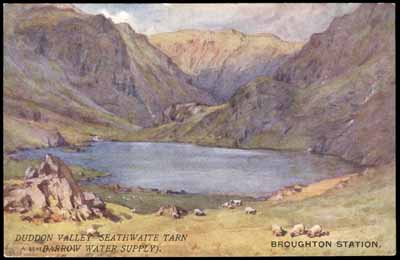 Duddon Valley and Seathwaite Tarn (Barrow Water Supply) by A. Heaton Cooper. The name of the nearest station (Broughton) is printed on the right.

In 1909 Tuck produced a series of 3 sets of 6 real photographic cards of steamers owned and operated by the Furness Railway on Lake Coniston (1 set) and Lake Windermere (2 sets). These cards are not particularly scarce. 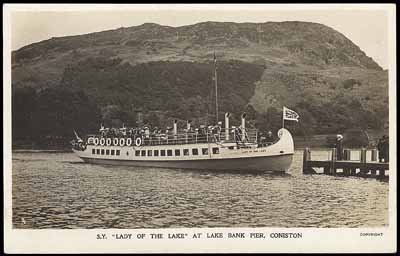 S.Y. Lady of the Lake at Lake Bank Pier, Coniston, from Tuck series 9

The Furness Abbey Hotel, in the grounds of Furness Abbey, was owned by the Furness Railway and both the abbey and hotel were heavily promoted on official postcards. 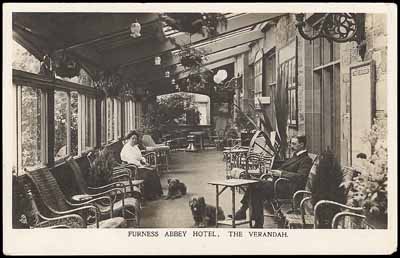 This Tuck real photographic card shows the verandah of the Furness Abbey Hotel. It was part of their series 16.

The rarest and most prized of all the Furness Railway official cards are the wonderful and colourful poster adverts reproducing posters of the time, produced by Tuck in 1914. There are 6 different designs and they make £80 to £100 each in auction. 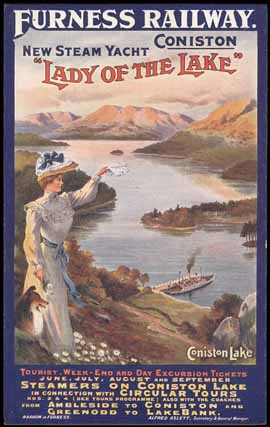 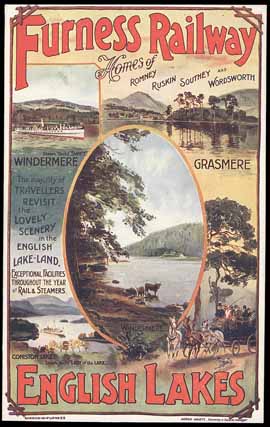 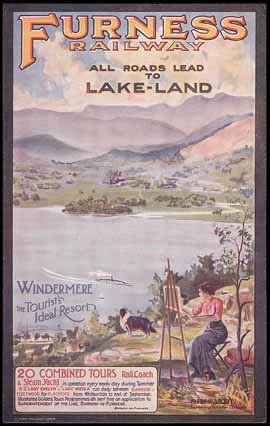 All Roads lead to Lake-Land poster advert, featuring an artist and Lake Windermere. 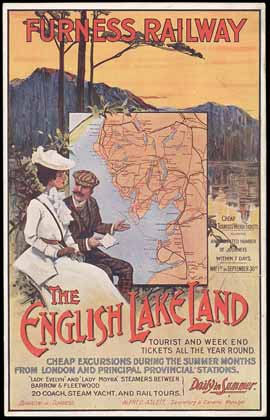 The English Lake Land poster advert with inset map of the area. 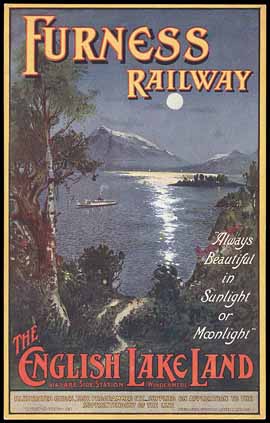 An attractive moonlit view of Lake Windermere features on this poster advert. 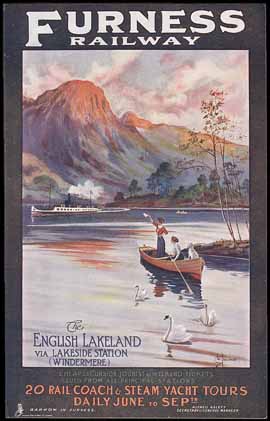 One of the Furness Railway lake steamers features on this view of Lake Windermere. The card advertises 20 rail, coach and steam yacht tours daily between June and September.

There is one postcard however which I have never seen. An intermediate size, half-tone vignette card, in red and blue, entitled “The Barrow Route Thro’ Lakeland to the Isle of Man”, with views of Furness Abbey, Windermere and the ferry “Duchess of Devonshire”, was issued by the Barrow Steam Navigation Co. in the first decade of the twentieth century. The company was a partnership between the Furness Railway, the Midland Railway and James Little & Co. Operations ceased with the opening of Heysham harbour in 1907. The only known design of postcard was printed by the Picture Postcard Company, which issued similar types of cards for other small railway companies. It could be that further cards in this series exist.