The David D. Ingle collection of medals from Waterloo to World War 2 was offered in Warwick & Warwick’s auction on Wednesday 14th December 2011 with total estimates of nearly £120,000.

This amazing collection was assembled in the 1960s and 1970s and included a wide range of units and campaigns with some real rarities.

The collection started with an 1815 Waterloo Medal to Thomas Thomas 3rd Bat 1st Foot or R. Scots. The Bn was heavily engaged at Quatre Bras and Waterloo suffering 15 officers and 128 men killed and wounded. The medal realised £2,645. Lot 6 was an 1842 China War Medal to C.P. Blake Asst Surgn H.M.S. Cornwallis. Charles Blake was present on shore at the capture of the Woosung batteries on 16th June 1842, where 165 guns were captured for the loss of 2 killed and 25 wounded. The realisation was £661. Lot 7 was an 1870 Canada GSM Fenian Raid 1866 clasp to Capt J. Bogue 2nd C.C.M., nearly extremely fine, scarce officer to Charlotte County Militia. Estimated at £400, it made £380. 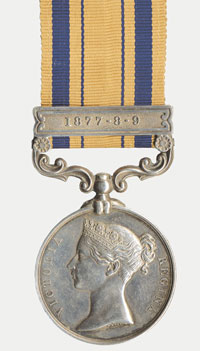 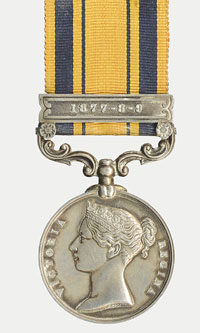 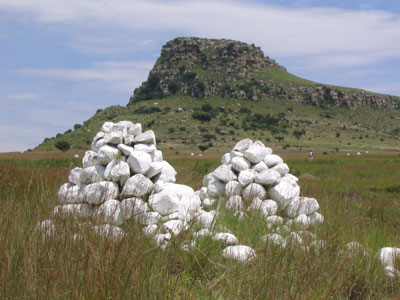 The 1881 Afghanistan campaign was well represented by lots 11-14, including Afghanistan Medal 3 clasps Charasia, Kabul, Kandahar and Kabul to Kandahar Star to Surgeon John Brodie A.M.D. He was born in Glasgow 1/4/1849, appointed Surgeon 4/2/77. It was offered together with a copy of the obituary from 19/3/87 British Medical Journal – “Surgeon John Brodie died on Tuesday morning, March 15th, The Royal Victoria Hospital, Netley, where he was stationed for duty. He joined the service on February 4th 1877. He distinguished himself in the Afghan war, and was highly commended, but received no official recognition. He served on the West Coast of Africa, where he contracted malarial fever, which he undermined his constitution.” The medal realised £1,121. There was also an Afghanistan Medal, without clasp, to 207 Pte J. Corton 59th Foot. 207 Pte James Carten was killed in action on 16th August 1880 at the storming of the Deh Khojah Village. A contingent of the 59th Foot were attached to 2/7th Regt for this action and the 59th only suffered 2 killed and 2 wounded in this action. This was a major action to clear Afghan artillery from Deh Khojah that was bombarding Kandahar, the village screening the enemy from counter battery fire. The action was a complete success with the 2/7th Foot suffering the heaviest casualties. The 59th Foot only suffered 8 killed and 13 wounded in the whole war, making this a very rare casualty medal. Estimated at £300, it realised £604.

Lot 17, which realised £1,840, was a Boer War DCM, QSA 5 clasps, KEVII Army LSGC and KGVI IND IMP MSM, to 64376 Whlr Q.M. Sjt W. Edden R.F.A. The DCM was in the London Gazette dated 27th September 1901. He was mentioned in Lord Roberts' dispatch dated 2nd April 1901, in London Gazette dated 10th September 1901. Staying with the Boer war, lot 18, realising £747, was a QSA 2 clasps Elandslaagte, Defence of Ladysmith, to 4471 Pte W. Brown, Devon Regt. He was killed in action with the 1st Bn at the Battle of Wagon Hill on 6th January 1900. The fighting on Wagon Hill resulted in the Devons losing 3 officers and 14 men killed in action and 1 officer and 34 men wounded. During this battle Lt Masterson earned the Victoria Cross.

World War I was represented by 143 lots with some real highlights. Lot 27 was the WWI Albert Medal 2nd Class for Gallantry in Saving Life on Land engraved “Presented by His Majesty to 2nd Lieutenant Thomas Johnstone Dickson, Yorkshire Regiment, for gallantry in saving life at Catterick on the 26th June 1917”. The London Gazette announcement read “On the 26th June 1917, Lieutenant (then Second Lieutenant) Dickson was instructing a man in throwing live bombs. One of the bombs failed to clear the parapet and fell back into the breastwork. Lieutenant Dickson told the man to run to safety, and himself did so. On reaching shelter he found that the man had not followed. He at once ran back into the breastwork, and saw the man crouching in a corner on the far side of the bomb. He ran past the bomb, seized the man, and dragged him back past the bomb into safety just before the bomb exploded. Had not Lieutenant Dickson deliberately returned into the danger zone, the man would almost certainly have been killed.” This rare medal, estimated at £6,000, made £7,762. 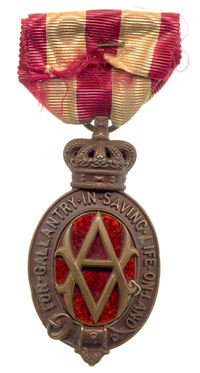 There were 4 MC groups in the Ingle collection, one to 1/8th Worcesters, two to R.F.A. and R.G.A. There were 20 DCMs, 3 also with MMs, including lot 32, the outstanding triple gallantry WWI DCM, MM, Russian Medal of St George 2nd Class, 1914 star trio and 1909 IGSM Afghanistan N.W.F. 1919 clasp, to Lt H.H. Pearson 44 Sig Coy. The DCM was “For conspicuous gallantry and ability. When the telephone wires had been cut, Corporal Pearson volunteered to lay a wire from the Brigade Headquarters, and successfully did so across a heavily shelled area, on his return journey laying a second wire, on his own initiative. It was owing to his bravery and ability that telephonic communications was re-established.” He was commissioned for service in the field and seconded for duty with Indian Signal Service on 6th February 1917. This group realised £3,680.

Lot 33 was a rare North Russia DCM, WWI MM and 1914-15 star trio, to 1647 Sjt J.J. Cannon K.R.R.C & MGC. The DCM was while serving with 19th Bn MGC. “At Ussuna, on the night of the 9th September 1919, an enemy patrol was reported to be in our rear position. He organised a party of British and Russian troops, and went out to verify the report. He encountered a party of the enemy, about 40 strong, and engaged them at 20 yards range. He then withdrew and reported to his officer, with the result that the enemy attack was beaten off with heavy loss. Next day, he again rendered gallant service.” Realisation £3,220". 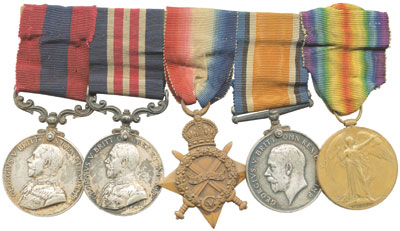 Lot 38, which made £2,012, was a rare First Day of the Somme DCM to 20-17387 Pte F. Ingle 20/Manch R. “For conspicuous gallantry. He attacked single-handed an enemy machine gunner, killed him and captured the gun which was causing many casualties.” On the 1st July, the 20th Manchesters attacked in the vicinity of Mametz Valley and Fricourt Wood. 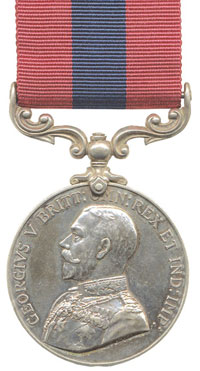 Lot 142 was an extremely rare YMCA WWI MBE (Britannia)(Civil), BWM and Medal of the Order of the British Empire (Civil) to J.W. Swithenbank “For conspicuous courage and devotion in carrying out his work at great personal risk,” as a Y.M.C.A. Worker. £1.035 was the final result. 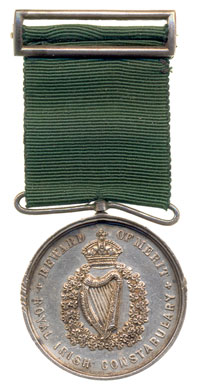 An Italian Front MM group to 6982472 A.Sjt C. Parke R. Ir Fus for “On the night 16/17th June 1944, A Company 1st BN THE ROYAL IRISH FUSILIERS was given the task of capturing MONTEGROVE – a castle on a feature which dominated the whole advance of the 56th RECCE REGT. After a long approach march, the leading platoon which was commanded by this NCO, came under heavy MG fire on reaching the outskirts of the castle grounds. Sgt Parke’s platoon, which had been lifted in carriers, immediately engaged the enemy and neutralized his fire while the remainder of the Company arrived and concentrated: but for his immediate action the Company would have received heavy casualties, and the impetus of the attack would have been lost. In the ensuing attack, Sgt Parke led his platoon with great dash and courage and, despite the darkness, maintained excellent control of his sections and kept the Company Commander very well informed. It was this control which undoubtedly influenced the success of the plan. The total of prisoners taken, mainly by Sgt Parke’s platoon was twenty-five and several enemy were killed. The Company also took seven M.G.34s and two 75mm A/Tk guns. Throughout the action, Sgt Parke showed great courage and initiative, and the speed and success of the attack was in no small way attributable to this NCO." This group, estimated at £2,000, made £2,127.