The Plain Of Forres Great Flood, 4th August 1829, A Rare Reward For Courage And Humanity

The silver medallion with the inscription “Presented by the Central Committee for the Flood Fund to George Munro, Findhorn, as an Honorary Reward for his Courage and Humanity shewn at the Great Flood August 4th 1829” was sold in Warwick and Warwick’s 14th February 2007 public auction sale.

The ‘Muckle Spate’ (literally large flood), on 4th August 1829, was the most extreme flood recorded in Scottish history and extended from Inverness in the north, to Montrose on the east coast. Its impact was severe with devastation to agriculture and small towns widespread and extensive. Fatalities were few, but the loss of housing and livelihoods were so severe (equivalent to £2.04 million in 2001) that a national emergency fund was created to provide relief. The River Findhorn, which flows out of the Monadliath Mountains northeastwards to the Moray Firth, was one of the rivers most severely affected and the flood was the subject of a very detailed account by Sir Thomas Dick Lauder, a local landowner.

The rainfall that caused the floods was described as being of, "extraordinary intensity" and "the total volume of water concerned in the floods was enormous.” Rain began to fall on the 2nd of August and continued until the 4th and was combined with a northeast wind. The River Findhorn filled the valley, 200 yards wide to a level of 50 feet above the normal height of the water and, in spite of the sparse population, in flooded areas the damage was very great. "The inundation covered a space of something more than 20 square miles in the Plain of Forres. Sweeping the eye round from Moy to Kincorth, Binsness, Findhorn, Kinloss to Forres and the Cluny Hills, the space within that circle was an entire sheet of water with a trifling patch of green or yellow ground”.
Five fishing boats sailed from Findhorn into the flooded area to rescue the stranded population, the boat “Lovey” was manned by Alexander Bremner, John Munro, Alexander Wright, Alexander Kelly and George Munro.

The Committee for the Flood Fund felt that the crews of the boats should be rewarded for their courage and humanity and that instead of a present in money which would soon be spent and forgotten, “a preferable method of remuneration for their services would be an Honorary Reward, a Silver Medal to each man, with his name and services engraved on it, which, with an honest pride, on festive or solemn occasions, could be displayed by himself and his descendants as a proof of his merit and of the public approbation”. 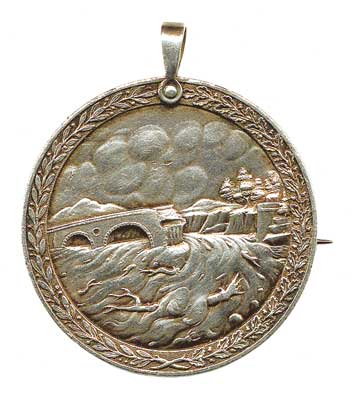 The silver medallion with the inscription “Presented by the Central Committee for the Flood Fund to George Munro, Findhorn, as an Honorary Reward for his Courage and Humanity shewn at the Great Flood August 4th 1829”, sold in Warwick and Warwick’s 14th February 2007 sale for £310.

The design on the medal is a view of the Bridge of Spey after the destruction of the two northern arches, with the ruins standing amidst the raging flood, emblematic of the devastation it caused and of the important services intended to be commemorated by the medal. In Sir Thomas Lauder’s book, there are 29 crewmen listed for the five fishing boats who sailed to help, making this a very rare award, even if all the medals have survived, which seems unlikely.