The Warwick and Warwick Archives

I recently returned from a valuation day in Sittingbourne. In the evening, after the valuation day had finished, I spoke to the Swale Philatelic Society. The PowerPoint presentation I normally give is called “Thirty Years on the Rostrum” and is mostly about the history of the picture postcard. However on this occasion I could not deliver this talk as the society had heard it three years previously and I had to deliver something different. I decided to talk about Postal History and called my talk “Travels of an Auctioneer”. I decided to base the talk on some of the 60+ articles I have written for my column in the monthly magazine “Stamp and Coin Mart”, over the last 5 years. The talk was new to me and it formed the first presentation to the Swale society in their new venue. Whilst I was unloading the equipment from my car, it felt strange to be asked by one of the members whether or not they had found the correct venue for the meeting. It is normally me who asks that question. The talk was well received by an enthusiastic audience and I enjoyed delivering it. 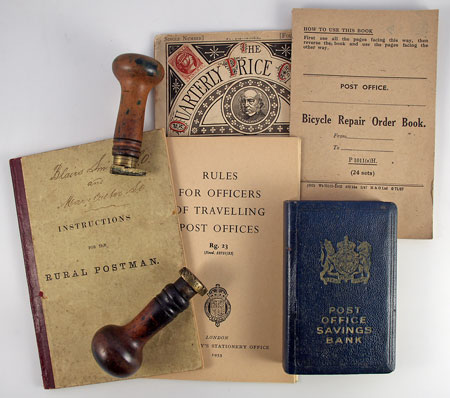 A selection of items from the archives of Warwick and Warwick, available to display to societies.

Over a long period Warwick and Warwick has been assembling an archive of material which eventually we intend to display in a glass cabinet, in the reception area of our showrooms. This material includes literature about stamp collecting in the 20th century and items of Post Office ephemera from days gone by. I had brought some of this material with me to display at Sittingbourne and it proved quite popular. One of the treasured items is a poster announcing to postmasters the introduction of uniform penny postage in 1840. I have not seen another like it. 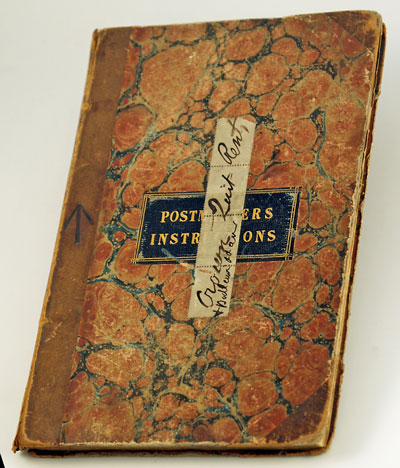 The 1846 book “Instructions for the Guidance of Postmasters in the United Kingdom”.

Another item which must be very rare is a book entitled “Postmasters Instructions”. It is dated 1846 and the spine is bound in leather. Some of the instructions contained in it are quaint. Postmasters are allowed to close their Offices during the hours of Divine Service on Sundays.

In 1857 the Post Office introduced Postal Districts in London and designated them by letters such as EC and WC. These were the forerunners of today’s postcodes. In the archive is a book issued by the Post Office “Principal Streets and Places in London and its Environs, as Divided into Postal Districts”. Again it has a leather spine, though regrettably the condition is poor. It was priced at one shilling, which seems a large sum of money considering it would have been to the advantage of the Post Office to get the new codes in use as quickly as possible. A smaller volume, this time dated 1892, is “Instructions for the Rural Postman”. These include He must blow a horn or loud whistle especially on his inward walk, to let the public know of his coming. Other items relating to the Post Office include a "Bicycle Repair Order Book", with entries as late as 1972. Is such a booklet still in use today? Also a booklet of tear off forms “Requisitions for Bicycle and Tricycle Parts”. 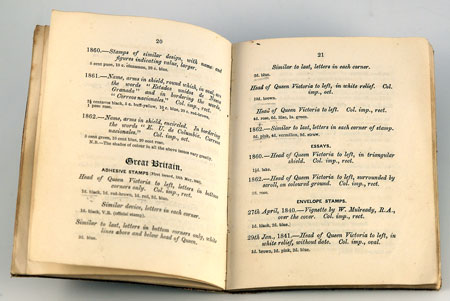 The 1862 2nd edition of the Mount Brown stamp catalogue, listing “nearly 1300 varieties”. The entry for the Great Britain 1840 1d black and 2d blue quotes the issue date as May 13th.

The archive includes early stamp catalogues such as that issued by Mount Brown in 1862. It is the second edition of his catalogue and it is bound in leather and has gold tooling. There are no illustrations, but every issued stamp is described, though not priced. Strangely, on the G.B. page, the issue date of the 1d black is stated as 13th May 1840. I wonder if this was corrected to 6th May in the third edition.

I look forward to displaying these items to other societies in the future.