These days if you wanted to communicate between USA and India you would probably send an email or make a phone call. If you wanted to send a document you would use the post and reasonably expect the item to be delivered after a week or so. However if we travel back to the first half of the 19th century things were very different. The normal means of communication was via the mail system, using sailing ships. The Suez Canal was not built until 1869 and mail from the USA would first be sent to England, from where it would travel by mailboat via the Cape of Good Hope to India. The journey from England around the coast of Africa was about 16,000 miles and this section of the route would probably have taken about 3 months.

Thomas Waghorn, born in 1800, joined the British Navy at the age of 12. One of his last posts in the navy was as a marine pilot on the Hooghly River, based in Calcutta and it was in this position that he became convinced of the benefits of steam propulsion for ocean-going ships. On leaving the navy, in 1832, he was interested in promoting a more direct mail service between England and its colonies in the far east, using an overland route via Marseille and later Trieste, ship to Alexandria in Egypt, canal and river to Cairo, overland to Suez and steamship down the Red Sea to India and beyond, thus avoiding the long sea journey around the Cape. This Red Sea route had been tried in the 18th century, but in the days of sailing ships there was dependency on the seasonally changing prevailing direction of the monsoon winds. Waghorn was convinced that the use of steamships would solve this problem. All that remained was to install a carrier service across the inhospitable desert between Cairo and the Red Sea port of Suez. If this could be achieved, then his direct mail service would be possible.

Between 1835 and 1837 Waghorn lived amongst the Arabs in Egypt and established a series of 7 rest houses with stabling, which could supply guides, horses and carriages, as he intended to cater for passengers as well as the mail. His postal agency flourished and it was so successful that in 1840, P & O, backed by the British government, set up a rival service in competition with him. Waghorn’s service suffered a severe setback when 300 of his horses died in a plague and he was bought out by the Egyptian government in 1842. The overland route continued to be used after Waghorn’s death in 1850 and after the introduction of a Cairo – Suez railway line in 1858. Not until the construction of the Suez Canal did the service cease. A wonderfully detailed itinerary and timetable of Waghorn’s Overland Route can be viewed by following this link: collectorsclub. 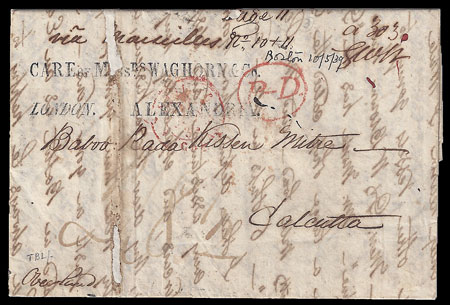 Around 200 covers are known bearing one of 14 or so different markings applied to Waghorn mail in London. A cover was auctioned by Warwick and Warwick that travelled to India using the Waghorn overland route. It was written in Boston, U.S.A. on May 10th 1839 and was a commercial document addressed to a company in Calcutta, India. The correspondence indicated that it travelled under additional cover to Baring Bros in London, presumably with further items of post. In London it was handed to Mr. Waghorn’s company for onward transmission and received the handstamp “CARE of Messrs WAGHORN & Co. / LONDON ALEXANDRIA.” It then travelled via Calais, Alexandria, Cairo, Suez and Bombay, reaching Calcutta on August 15th 1839. Even today that journey would be something of an adventure!