The Warwick and Warwick April 2014 auction contained a comprehensive collection of Trinidad postal history, offered as collections of pre-stamps, censor mail, airmail, maritime, taxed and military mail. The collector had carried out a lot of research and his “writing up” was a pleasure to read. It makes such a difference to the enjoyment of a collection if the various items of postal history are explained. Although I have been a philatelic auctioneer and valuer for almost forty years I learn something new every day.

The collection contained an interesting section of prisoner of war mail. During both the First and Second World Wars, part of St. James’ Barracks complex, near Port of Spain, was turned into a prisoner of war camp and detainee camp for locals as well as seamen and ship passengers who were alien nationals. During WWI the camp started receiving inmates in August 1914 and closed in January 1920, the maximum occupancy having been 102. Prisoners were permitted to send ordinary mail free of charge and were supplied with envelopes printed “PRISONERS OF WAR”. Two different handstamps were applied to the front, and the reverse would bear the handstamp signature facsimile of the Superintendent of Prisoners. 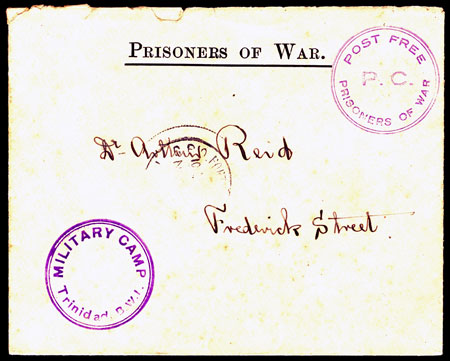 WWI Prisoners of War envelope bearing the 2 different handstamps in use, addressed locally. 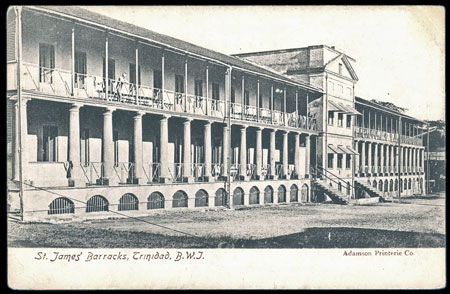 Picture postcard of the St. James’ Barracks complex, part of which was turned into separate prisoner of war and internment camps during both the world wars. 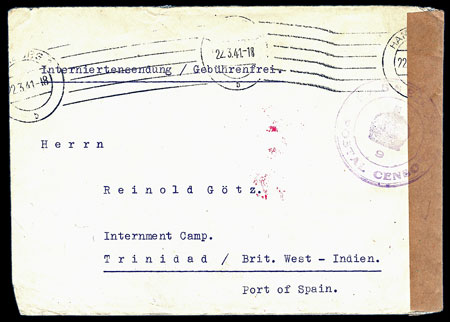 During WWII the 60 internees were made up of 8 British and Colonial subjects, 41 enemy aliens and 11 non-enemy aliens. One resident was Reinold Götz, a German subject who was a Port of Spain stamp dealer. He was detained for the duration of the war and continued his stamp business after the war. The fact that he was a stamp dealer probably accounts for the survival of this rare incoming censored cover addressed to him, from Germany.

Two volumes of the collection were devoted to maritime mail, which was of prime importance to an island nation like Trinidad. Regrettably the collection did not contain a copy of the rare Lady McLeod local post, which was in operation from 1845 to 1854. In fact I have never seen the stamp, let alone a cover. The “Lady McLeod” was a 60 ton steamer which supplied a postal service between the ports of Port of Spain and San Fernando further south. The postal service was operated by the shipping agents Turnbull Stewart & Co, who continued to act as forwarding agents until 1919. 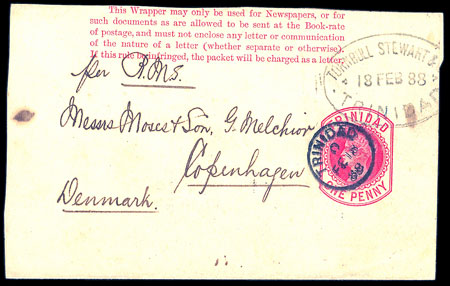 A further 2 volumes of the collection concerned taxed and postage due covers. These always fascinate me, whatever the country, as there is so much to study. The lengths that some of the postal administrations went to (and still go to) to recover a fairly trivial sum of money is staggering. The interest in these covers stems from the fact that the majority are commercial. It is still possible to assemble a really interesting collection of postage due covers from any country in the world without a great deal of expenditure, which cannot be said for those collecting Lady McLeod covers. 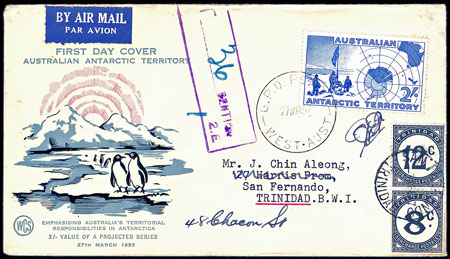 This Australian Antarctic Territory 1957 first day cover may have been ruined in the eyes of collectors of first day covers, but in my eyes the value has been increased by the fact that the 2/- stamp underfranked the airmail rate, surprisingly, and it has been taxed 36 centimes (French currency used by the U.P.U). This is double the postage shortfall and the postage due of 20c was collected in Trinidad where the postage due labels were applied.