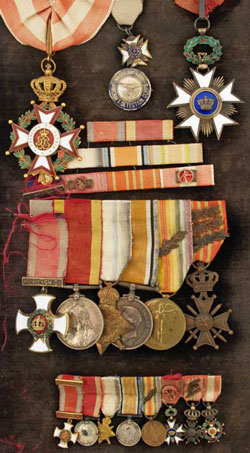 Geoffrey Basil Spicer Simson was born in Hobart in 1876 and joined the Royal Navy in 1889. He served in the Mediterranean, Pacific and Home Fleets and in 1901 he served in the North Borneo Boundary Commission.

He served in China in HMS Waterwitch, a wooden hydrographic vessel and Spicer Simson’s China Medal was awarded for service on this ship as a Lieutenant, with a total of 80 medals awarded to the ship. He later conducted the first triangulated survey of the Yangtze River from Ichang upwards in 1905-08 on HMS Widgeon and the lot was offered together with a 4 page letter dated 2nd October 1906 detailing the survey work to be conducted.

A 1908 newspaper cutting gave an insight into the conditions:

Taking measurements at those places consisted of a series of mountaineering feats carried out with unswerving patience and courage. Again at other places the towering cliffs made it impossible to arrive at a desired point; . . . With occasional delays, owing to exceptionally bad weather, an average speed of five miles per day was made. Chungking was reached on June 1, and the party had a little holiday after their hard work. The total distance from Ichang to Chungking was fixed at 345 nautical miles. . . . . Eng Lieut Black passed through Shanghai last week on his way home and Lieut Spicer Simson will follow on board the RMS Empress of China. Permission has been given to the two officers to spend their foreign service leave in Canada, in consideration of the difficult work they have just completed.
Accompanying the lot was a photo album of his time in China with 109 photos of all aspects of the trip, most with written descriptions. A further photo album of 158 photos chronicled the 1911-14 period when he was the director of a survey of the Gambia River on HMCS Rose.
At the start of WWI he was in command of HMS Niger, a torpedo gunboat converted to a minesweeper that was torpedoed and sunk near Deal in 1914, by U-12. He then served ashore until he was given the task to organise and lead the now famous Lake Tanganyika Naval Expedition. 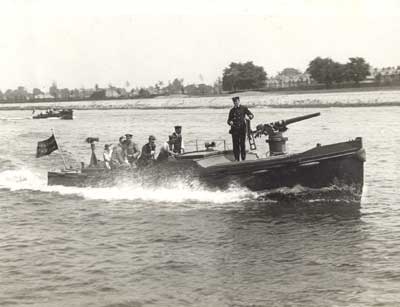 Commander Spicer-Simson was the commander of the Lake Tanganyika Naval Expedition and the following report was published in the London Gazette dated 13th July 1917.
In April 1915, a scheme was approved by the Admiralty for depriving the Germans of the command which they had hitherto held, by means of three small armed vessels, on Lake Tanganyika. The plan was to send out from England to Cape Town, and thence by rail, road and river to the Lake, two motor boats of a speed and armament which would outclass those of the German vessels. The two boats, with a small Expeditionary Force under the command of Commander G. Spicer Simson, R.N., arrived at Cape Town towards the end of June. By December 23rd the “Mimi” and the “Toutou”, as the boats were named, had been successfully launched on the Lake, and three days later the first action was fought. 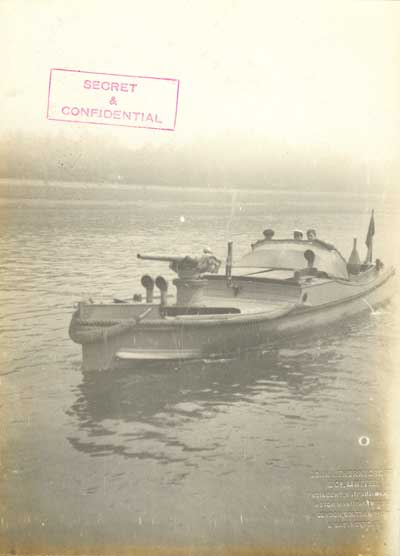 Notwithstanding the precautions that were taken to keep the expedition a secret, it is difficult to believe that the enemy received no warning of its dispatch. They probably heard of it, but refused to take it seriously. Certainly it must have seemed to them, at first sight, a harebrained enterprise. After being landed, at Cape Town the boats had to be taken 2,300 miles by train, via Bulawayo and Livingstone, to the railhead north of Elizabethville in the Belgian Congo. Next there followed 150 miles of haulage, over atrocious roads, across country varying in altitude from 2,000 to 6,000 feet. This was followed by another journey on trucks over a short section of railway. Then the boats were floated 400 miles down the Lualaba River under their own power for part of the journey, and for the rest on lighters. Shoals and rocks abounded, and barrels had to be lashed under the boats to reduce their draught. The final stage of the journey was by rail again to the small Belgian harbour of Lukuga, about half way up the western shore of the Lake. 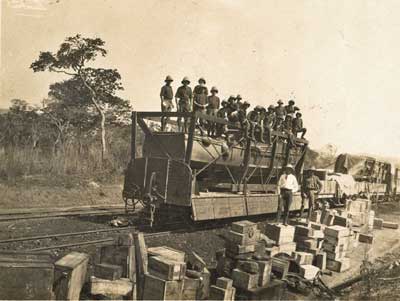 Commander Spicer Simson’s reports of his journey to Lake Tanganyika constitute a fine record of courage and perseverance. The following is an extract from the report in which he describes the cross-country portion of the journey.

I desire to call to your attention the excellent work done by the officers and men of the Expedition who were on the road with me. They have cheerfully worked under the most trying conditions of heat always, rain occasionally, and thick dust on most occasions. The first and last of these conditions were particularly hard to bear on account of the shortness of water which was experienced. Washing, and even drinking water, was voluntarily given up for use in the boilers of the traction engines in order that the progress of the Expedition should not be delayed. Only those who have had to work without shade in the thick dust raised by the engines under a tropical sun, with the added discomforts of nothing to drink and nothing to wash in, can realise what determination is necessary to maintain the necessary energy to overcome the great difficulties which were encountered on the road. It was, in the opinion of all competent judges who knew the road, sheer madness to attempt to take traction engines alone over it, and more so to try and tow the boats by this means, or any other. I wish to bring to your notice the excellent work done by Sub-Lieutenant A. Dudley, R.N.V.R., who was in charge of the transport. It is mainly due to his exertions that the transport of the boats over the road was safely accomplished. 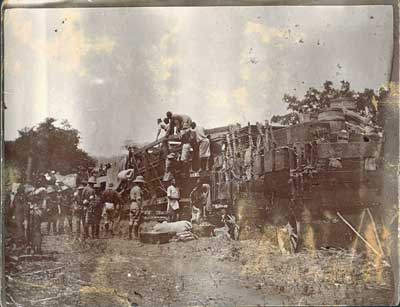 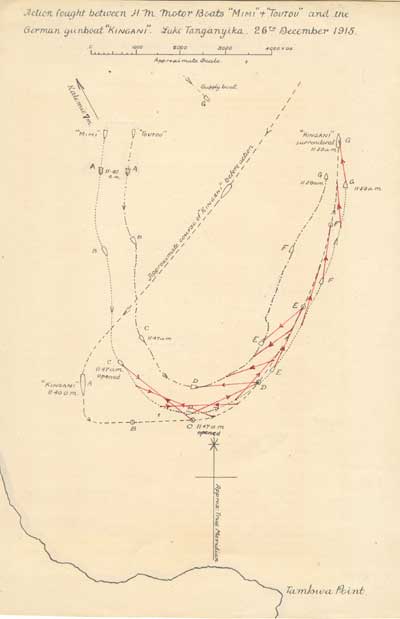 The first encounter with the enemy took place on December 26th. At 9 a.m. the German gunboat Kingani, a vessel of 30 or 40 tons armed with one gun was sighted about seven miles distant from Lukuga steaming south, and the Mimi and the Toutou immediately set out to attack her. The enemy having no gun aft, the Mimi attacked her from astern, and, having got the range, opened fire with a high explosive shell from her 3-pounder Hotchkiss. The first shell struck the Kingani’s gun-shield, killing the two men at the gun and the captain. After a few more shots the remainder of the crew surrendered, and the Kingani was taken into harbour in a sinking condition. She was soon repaired. A 12-pounder gun was mounted on her, and, as H.M.S. Fifi, she proved a valuable addition to the British flotilla. 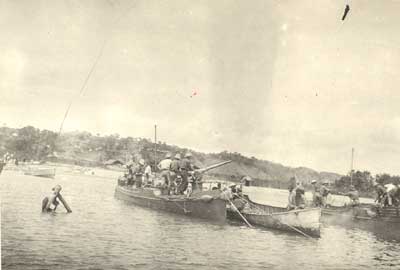 This left the enemy with two ships, the Graf von Gotzen, a vessel of 400-500 tons carrying one 4 inch and two smaller guns, and the Hedwig von Wissman a gunboat of about the same size as the captured one. On February 9th 1916, the Hedwig von Wissman was attacked by the Fifi and Mimi and sunk after a chase and running fight which lasted for three hours. The result was largely due to the skilful manoeuvring of the two British vessels. The Mimi kept astern of the enemy and out of range of his after gun, causing him to tack from side to side in order to bring his foremost gun to bear, and thus delaying him until the Fifi could get within range. Finally a high explosive shell from the Fifi destroyed the enemy’s engines. Before she sank, the Germans abandoned their ship, and all except two Europeans and three natives, who had been killed, were picked up by the Fifi and Mimi.

It would have been satisfactory if the third and largest of the German ships could have been accounted for by the British flotilla, but she did not risk an engagement. After being bombed by a Belgian aeroplane, she was scuttled by the Germans in Kigoma harbour, on the eastern shore of the Lake.
So ended Germany’s command of Tanganyika. Apart from the material loss inflicted on the enemy, the success of the naval expedition did much to enhance British prestige among the natives, not only in the immediate neighbourhood of the lake, but in the northern districts of Rhodesia and in adjacent German territory. The German supremacy of the Lake had for years being recognised as an established fact, and its total destruction within a few months of the arrival of the Expedition afforded opportune and striking evidence of British power. Spicer Simson was awarded the DSO and special promotion to Commander; there were also 3 DSCs and 12 DSMs awarded to Expedition members.
On his return from East Africa he was appointed Staff Officer in charge of the Colonial Section, Intelligence Division on 26th December 1916. In 1919 he was the Official Interpreter of the First International Hydrographic Conference and served as Secretary General of the International Hydrographic Bureau from 1921 to 1937. He retired to Canada and died in 1947. 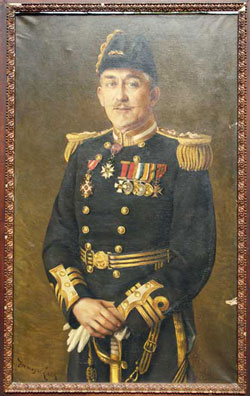 The full medal details are Distinguished Service Order, 1900 China War Medal without clasp, 1914-15 star trio with MID oak leaf, Belgian Order of the Crown commander’s neck badge, Belgian Croix de Guerre with 3 palm leaves and Monaco Order of St Charles commander’s neck badge to Commr G.B. Spicer-Simson R.N. (Lieut G.B.S. Simson H.M.S. Waterwitch on China), with matching miniatures. The medal group was offered together with an outstanding array of personal papers, photographs, newspaper cuttings, invitations, presentation pieces etc, including stunning three quarter length framed oil on canvas portrait in full uniform by Tremayne Lark, purpose made felt lined metal tin with name plate on lid containing naval cocked hat made by Gieve & Sons, gold braid rank epaulettes, naval dress belt and sword hanger, 4 pairs white gloves, stiff collar and 2 handkerchiefs with S monogram all in very good condition, DSO bestowal document, diploma for Belgian Order of the Crown, 1927 Buckingham Palace letter with permission to wear Monaco Order of St Charles, a box file on Lake Tanganyika with over 70 photos most annotated on the back, press cuttings, typed account of Expedition, hand drawn maps of actions with times and positions of all ships, lectures he gave, letters etc, a 25cm silver presentation plate with an engraving of one of the gunboats in the centre from Thornycroft & Co after his talk on the Expedition, a large presentation photo album from Thorneycroft with various photos of Mimi and Toutou including photos of trials marked “secret”, design drawings etc, a scrap book of press cuttings and photos of the Expedition, large Union Jack flag, Vice-Admiral flag thought to have been flown in East Africa to confuse the Germans as to the size of the British naval contingent, photo album and letters of Yangtze survey, photo album and letters from Gambia, a large silver cigarette box lid engraved Presented to the Official Interpreter of the International Hydrographic Conference London 1919 Captain G.B. Spicer-Simson D.S.O. Royal Navy, by the visiting delegates of the Conference as a token of gratitude for his good services, an album of mostly post war photos, invitations, passes etc from London and Europe, book La Campagne du Tanganyika by Moulaert with hand written notes throughout etc.