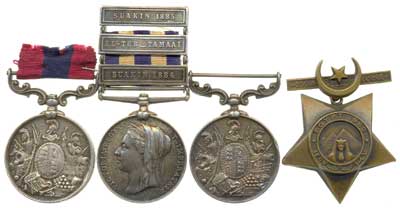 The British government sent a British force to the port of Suakin in the Sudan to confront the Mahdist forces who had routed a British officered Egyptian force inflicting heavy casualties in February 1884. The force under the command of Major General Graham started landing at Suakin on the 20th February. Once the full force had arrived at Suakin, they were moved down the coast to Trinkitat, with the plan to move inland to relieve the forces in Tokar. On the 29th February 1884, the force of some 4,500 troops moved towards the hamlet of El-Teb several miles inland. The infantry marched in a square, with the artillery positioned at the corners, and the two regiments of cavalry, the 10th and 19th Hussars following. The British artillery and Gatling guns inflicted heavy casualties on the Mahdist forces, who were also armed with a few captured artillery pieces. The Mahdist forces repeatedly charged the British square with swords and spears but failed to break in.

After a period of fighting the cavalry brigade under Colonel Stewart charged the Mahdist forces, but the terrain was not ideal for cavalry with a lot of thick thorny scrub. The cavalry charge was attacked in the flank by an enemy force hidden in the scrub. It was during this fighting that Colonel Barrow was wounded and unhorsed. During this severe fighting the two Hussar regiments suffered the heaviest casualties of the British force with 20 killed and 48 wounded from a force total of 34 killed and 155 wounded. The Mahdist force lost approximately 1500 killed and unknown number wounded. Major General Sir Graham’s dispatch dated 31st March 1884 included the mention of:

“Lieutenant Colonel Barrow CMG, 19th Hussars, is a most valuable officer, and his leading of the second line at El-Teb, until he was wounded, is reported by Brigadier-General Stewart as beyond praise.” In the same dispatch, “Quartermaster-Sergeant Marshall, 19th Hussars set a good example of coolness and courage and is mentioned for his devotion shown in saving the life of Colonel Barrow when that officer was wounded. Troop Sergeant-Major Taylor, Sergeant Fenton and Private Bosley, 19th Hussars, are also favorably mentioned for gallantry.”

Quartermaster-Sergeant Marshall was awarded the Victoria Cross, “For his conspicuous bravery during the Cavalry charge at El-Teb, on 29th February last, in bringing Lieutenant-Colonel Barrow, 19th Hussars, out of action. That officer having been severely wounded, and his horse killed, was on the ground surrounded by the enemy, when Quartermaster-Sergeant Marshall, who stayed behind with him, seized his hand and dragged him through the enemy back to the regiment. Had Lieutenant-Colonel Barrow been left behind he must have been killed.” 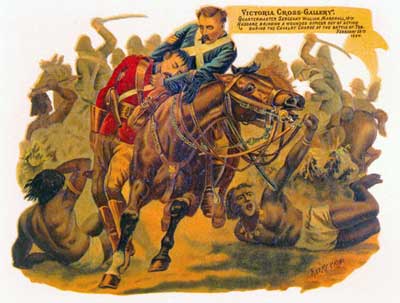 Sergeant Fenton was presented with a 2 handled silver coloured tankard, made by Mappin & Webb, engraved on the front “Sergt W. Fenton 19th Hussars from Mrs Barrow for services rendered to her son Lt Col Barrow 19th Hussars during & after the Battle of El Teb February 29th 1884.” This was included in the sale, which took place on the instructions of the family. 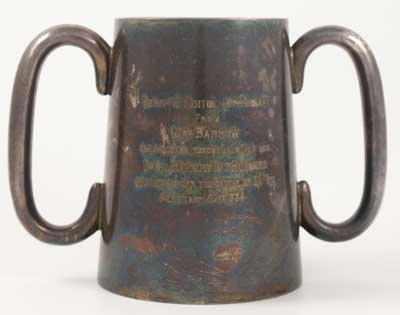