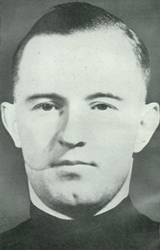 William Joyce was the American-born British traitor, who was hanged in January 1946, for broadcasting anti-British propaganda from Germany during the Second World War. He acquired the name “Lord Haw-Haw” from the upper class drawl he used during his broadcasts. Warwick and Warwick have sold by auction a previously undocumented series of five letters, sent from him, in his Wandsworth prison cell, to his friend, Captain Aubrey Lees, between the time of his trial and his execution. The letters give an insight into his character and reveal a human, caring individual, despite a fervent belief in the Nazi cause.

In the letter dated 19.11.45 he states “… I am convinced of the efficacy of sincere and honest prayer” and “As you can well believe, Wagner is one of the more important influences on my life, at least in the sensuous aspect. True, if the end has come, let it be grand, sombre and selfless.” 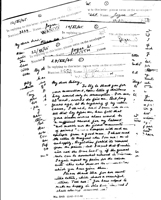 In his letter dated 22.12.45, he has learned that his appeal to the House of Lords has been dismissed. “Pease forgive me for not having replied earlier to your most welcome and very generous letter of the 8th: but I preferred to wait until I knew their Lords’ decision. Now I know it, and I say, with all my heart, that I count it the highest honour to die for my ideals. The manner in which this decision was announced speaks for itself: and I am wondering if I shall have the academic interest of reading the Lord Chancellor’s “reasons” before, on January 3rd, I go to join my fathers, or whether the date of their promulgation will be later. I must, however, express sincere admiration for Lord Porter who, in my opinion, was subjected, without success, to immense pressure. I will not trouble you further with details of the case; for, after all, in the face of invincible prejudice, reason is helpless.”

“That I have acted as I believed to be right is, for me, victory in itself. The purpose of life is to serve: and it never occurred to me that I held my tenure by kind permission of H. M. Government. Having had some opportunity lately of beholding the Lords and Commons, I feel that it is not I, but they, who are under sentence of death. Many of them are dead without knowing it. May God save the British people! But I doubt if He will, unless they help themselves.”

His letter dated 28.12.45 was written just days before his execution. “The execution will take place at 9am on Thursday: and you can think of me at that time as entering upon a triumph and of your friend as carrying this friendship to the other Bank……And if I can venture to refer to the ordeal of the Great Failure, I can only say that the Divine Victim had none of the comforts and solaces which have fallen so profusely to my lot. But His glorious example inspires and sustains.”