In February 2005 Warwick and Warwick sold one of the rarest and most desirable of all crash mail items, an envelope recovered from the wreck of the Hindenburg airship which burst into flames whilst mooring to its pylon, at Lakehurst, New Jersey, USA, after a transatlantic flight, on May 6th 1937.

Fixed wing aircraft were making commercial flights within USA and within Europe in the 1920’s and the race was on to find a means of flying long haul distances, especially across the Atlantic. It was thought that the most suitable vehicle would be the airship and in Britain work began on development of the R100 by Vickers and the R101 by the Air Ministry. The two teams were in competition and there was no cooperation between them. Both airships took to the sky before they had been adequately researched and tested and the R101 crashed in France on its maiden voyage. Subsequently, the R100 was dismantled.

However the Germans had been flying the Graf Zeppelin successfully since 1928 and by 1937 it had flown 16,000 passengers over 1,000,000 miles. The Hindenburg was built as the larger successor to the Graf Zeppelin, in May 1936. It could carry 70 passengers and 13 tons of freight. Only a year after its introduction it exploded in flames whilst attempting to moor at Lakehust, New Jersey, killing 35 people. Although sabotage was suspected, Germany ended its airship programme.

A number of charred mail bags were recovered from the wreckage of the Hindenburg and all letters recovered were placed into a so-called “ambulance” envelope and sealed with U. S. Post Office official sealing labels and forwarded to the addressee, as long as the address was still legible. The envelope sold by us, in our February 2nd 2005 philatelic auction, had never been removed from its “ambulance” envelope, which was sealed on the reverse with 3 official seals. 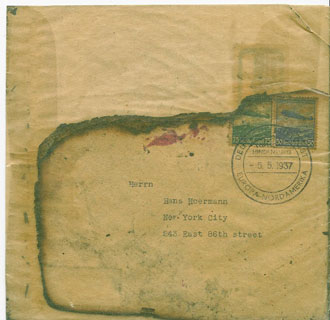