Was this Cover from Captain Scott? 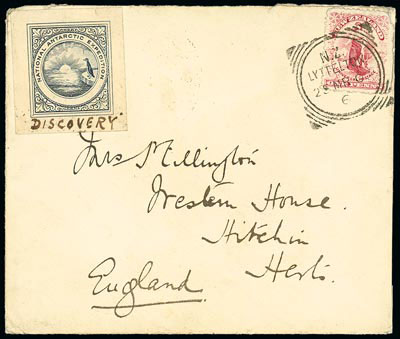 This cover from the 1901-4 National Antarctic Expedition realised £3,320 in our July 7th 2010 auction. This expedition was the first British expedition to the continent of Antarctica. It was under the leadership of Captain Robert Falcon Scott, the Royal Naval captain who with 2 companions would die heroically on their return from their trip to the South Pole on the 1911-12 expedition.

In December 1902 the Morning, under the command of Captain Colbeck, sailed from Lyttleton, New Zealand, bound for McMurdo Sound, to relieve the expedition vessel Discovery, which was trapped in the ice. The Discovery could not be freed and the relief ship Morning returned to Lytteton, in March 1903, in order to overwinter in New Zealand and return at a later date to free the vessel. Captain Colbeck returned to Lyttleton with the letters written by the expedition members, the envelopes of which bore the expedition labels. They were franked with New Zealand 1d Universals and posted in Lyttleton on March 25th.

Initially we thought the cover was written in the hand of Captain Scott himself, but comparing it with a cover described by Paul Wales at http://www.rpsl.org.uk/polar/ it was clearly written by the same person and Mr Wales attributed his cover to the expedition physicist, Louis Bernacchi, writing to his girlfriend, Miss Durham. We discovered that Louis Bernacchi married Winifred Harris in 1906 and Scott was his best man. Although Bernacchi could have changed his girlfriends, our suspicions of a mis-attribution were confirmed when we viewed a cover addressed to Mr Richard Bernacchi, from Louis, in the auction catalogue of a rival auctioneer. The handwriting was quite different.

“New Zealand Antarctic Postal History to 1941” by Robert Duns of New Zealand lists a total of only 9 envelopes, posted at Lytteleton, including one from Captain Scott to Mrs Millington. Although Robert Duns does not remember the reasoning behind this attribution, when the book was written in 1997, it seems entirely possible.