The WWII George Medal group to Sgt James Scott McGowan, of the Royal Army Ordnance Corps, was offered, on behalf of the family, in Warwick & Warwick’s auction on Wednesday 10th December 2008.

James Scott McGowan was born on 20th April 1920. He was a resident of Dumfries and enlisted as a storeman, on 22nd May 1940, in the Royal Army Ordnance Corps, his trade being given as a grocer.

He was re-classified as a storeman ammo Class 3, on 2nd July 1940, Class 2 on 10th May 1941 and Class 1 on 16th May 1944. Through this period it would appear he remained in the UK, passing various courses, including Fire Fighting, S.C. Bomb Recognition and Battle Training. 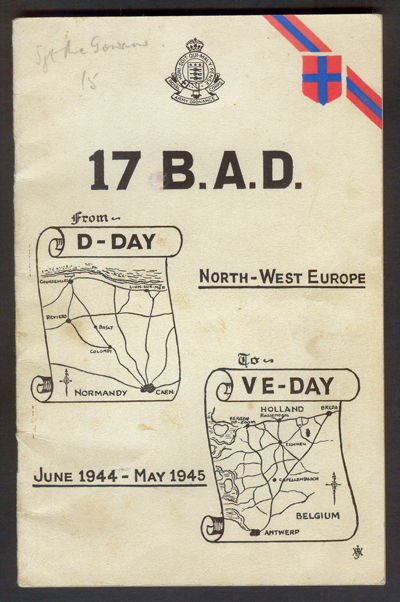 By the time of the Normandy invasion, James McGowan had been promoted to sergeant and was serving with 44 Ordnance Ammunition Company, 17 Base Ammunition Depot, which formed in the spring of 1943. The lead elements of 44 OAC landed in the first few hours of the invasion and were initially stuck on the beach and did not get off until H Hour + 180 minutes, to find the sites earmarked to receive the first dumps. These were within a mile of Luc-sur-Mer on Sword Beach. The first DUKWs carrying ammunition arrived at H + 270 and then it was extremely busy despite the constant mortaring and shelling across the whole area of the beachhead. Shortly after this the first vehicles began to arrive at the dumps for re-supply of ammunition especially 105mm for the self propelled howitzers of 3 Division, who were deployed on a line about half a mile in front of the beach and firing at a tremendous rate.

The second elements of 44 OAC landed on the evening of D-Day. Due to German resistance the plan to move off the beaches was delayed, resulting in the area becoming very crowded. They soon had 3000 tons of ammunition packed into an area that would normally hold 800 tons. Naturally, since the depots which by now should have been scattered over the BMA, were still within a few yards of the beaches, there was a good deal of congestion. No 3 SSD found their small housing estate – perhaps 300 yds square – shared by the Ord stores dump, POL, a DID and the APO. A chance Focke Wolfe 190, with one lucky bomb, hit the POL depot, causing waves of burning petrol to surge through the DID and into No 3 SSD. Within 30 seconds there was a large fire, which destroyed half the stacks of 3 SSD – about 450 tons – before burning itself out. In the absence of major fire-fighting equipment, little could be done, except to try and prevent it spreading, and some very fine work was performed, notably by Captain Thompson of 11 OBD, and Sergeant McGowan (awarded the GM) and Sergeant Alden of 44 OAC. These, together with a number of other Ordnance and Pioneers, showed very great courage and determination, actually breaking down burning 105mm stacks with their hands to prevent the spread of fire. Captain Thompson was killed by a bursting 105mm shell in the closing stages of the fire. During the height of the fire, 105mm shell were exploding at the rate of 10 per minute and an area about 200 yards deep all round 3 SSD was being swept by shell splinters. It is indeed surprising that that there were so few casualties, given that a hundred or so were fighting the fire, which lasted for about six hours.

The award of the George Medal to Sergeant McGowan was announced in the London Gazette dated 10th November 1944 “in recognition of conspicuous gallantry in carrying out hazardous work in a very brave manner”.

Sergeant McGowan was still serving with 3 BAD in Germany after the war, no doubt helping with the clearance of ordnance etc. He attended a Wos’ & Sgts’ Mess farewell dinner in June 1946 and was discharged from the Army on 7th September 1946. 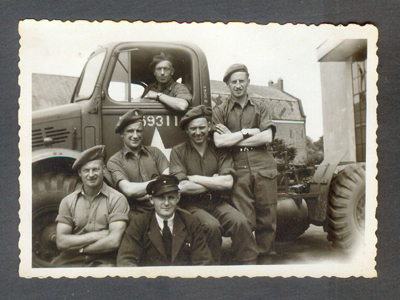 He was presented the George Medal by the King on the 17th December 1946 at Buckingham Palace. His medal group achieved £4,255. 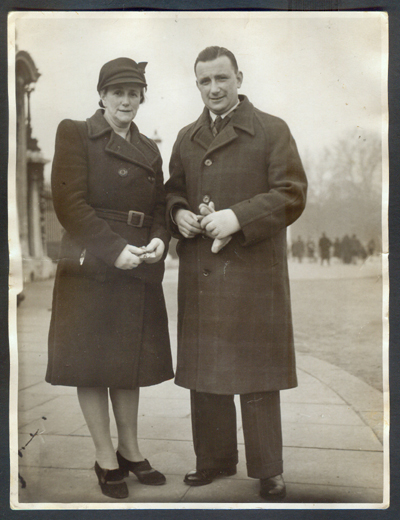