Fred Harper enlisted in the Royal Lancaster Regiment on 7th November 1914, aged 28, 5 feet 4 inches tall. He appears to have been posted to the 8th Battalion on completion of training where he excelled. The photo below, while undated is likely to be before the battalion proceeded overseas, and he is already a corporal in the Stretcher Bearer Section. 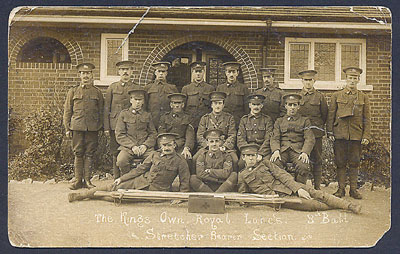 The battalion went to France in September 1915 with the 76th Infantry Brigade, which quickly moved from the 25th Division to join the 3rd Division on 15th October. The brigade was heavily involved in the early stages of the Somme offensive taking part in the Battle of the Bazentin Ridge 14th-17th July 1916 and then in the following Battle of Deville Wood. It was during this battle that Sergeant Harper distinguished himself receiving the Third Division commendation card copied below for actions in the field on the 18th-24th July 1916 signed by Major General Deverell. 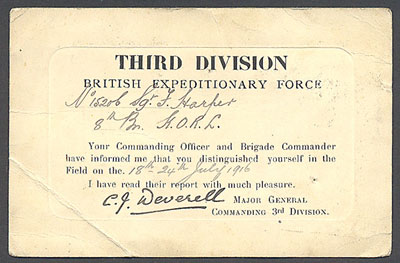 The award of the DCM was published in the London Gazette dated 20th October 1916:

“For conspicuous gallantry during operations. He showed an utter disregard of danger when going out to attend the wounded under heavy shell-fire. Finally, when wounded himself in two places, he came back from the aid post to assist in dressing the wounded, and stayed there till there was no further need of his services.”

His wounds were quite severe and he was immediately hospitalised and in a letter from a regimental officer dated 17th April 1917 it read:

I am very grieved to hear that your wound has left your right leg shorter than the left, but after all it might have been very much worse. 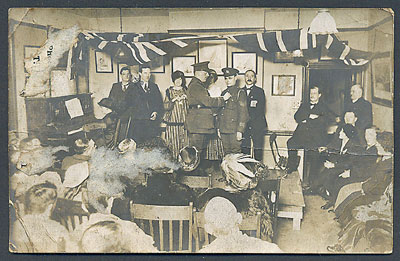 The battalion Regimental Medical Officer wrote a testimonial for him dated 13th January 1917:

It gives me great pleasure to testify to the capabilities of Sgt Harper. I was fortunate enough to have him for several months in France as my Sergeant in charge of the Stretcher Bearers when I was M.O. to the 8th K.O.R. Lancs and found him most capable and willing. He has a thorough knowledge of First Aid, stretcher work & medical orderly work. I can thoroughly recommend him for any post requiring these qualifications
After recovering from his wounds and returning to active service, he was awarded the Military Medal. Unable to confirm the date of the London Gazette entry for this award, but from papers, it must have been between May 1917 and July 1918.

A copy of 3rd Battalion Royal Lancs Part One Orders dated 26th July 1918 lists 4 SNCO’s including 15206 Sgt F. Harper DCM. MM, “have been accepted for admission to a Officer Cadet Bn. They will be attached to the East Anglian Brigade, Crowborough, Sussex pending posting to an Infantry Officer Cadet Bn. They should be in possession of a complete kit in good condition as laid down in para 6(c) of ACI 785/15.”

His commission as 2nd Lieutenant in the Manchester Regiment was confirmed on the 17th March 1919. 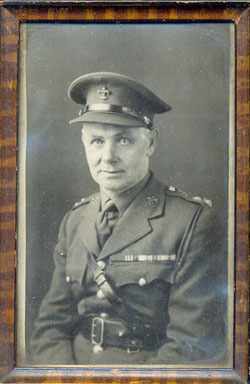 This important group was offered in our October 19th auction, where it realised £2,645. The lot description was as follows: WWI Distinguished Conduct Medal and 1914-15 star trio to Capt F. Harper (15206 Sjt 8/R. Lanc R on DCM, 15206 L.Sjt R. Lanc R. on star, 15206 Sjt R. Lanc R. on BWM and 15206 Pte R. Lanc R. on Victory), with swing mounted set of miniatures as worn, with WWI DCM, MM, 1915 star trio, WWII 1939-1945 star, Defence Medal, BWM and KGVI Regular Army bar LSGC. The medals are being sold on behalf of the family and the location of the missing full size medals is unknown. Offered with an outstanding range of supporting documents and photos including 9ct gold Masonic medallion engraved to “Bro F. Harper C.P. for services rendered Aug 7th 1923, raised to Primo Aug 2 1921”, postcard of 8th Bn Stretcher Bearer Section with Harper sat in the centre as Cpl, postcard of him being presented either MM or DCM as Sgt with 4 wound stripes, 2 framed photos in officer’s uniform, 2 photos in later life, letter dated 22/8/16 from CO to his wife stating “He has been recommended by me for Gallant Conduct in the field on the 18th to 24th July 1916” etc, Third Div distinguished conduct card signed by General Deverell, LNWR Crewe 1916 letter of congratulation, various letters from 8th Bn officers, testimonial written by RMO in 1917 stating he was in charge of the stretcher bearer section, 2 letters from the RMO, 26/7/18 Part One Orders stating he had been accepted for admission to an Officer Cadet Bn, Commission Warrant appointing him 2 Lieut in Manchester Regt dated 17/3/19 in damaged envelope of transmission, 1946 East Lancs TA letter confirming claim for award of Defence Medal was approved etc.