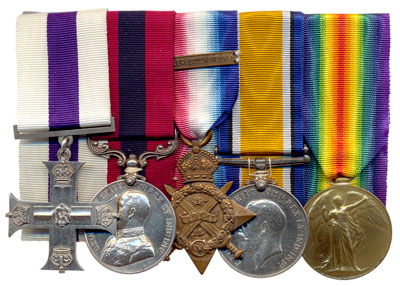 Sergeant Lewis was serving as Sergeant with the 53rd Battery RFA when the award of the DCM was announced in the London Gazettes dated 1st January and 13th February 1917:

“For conspicuous gallantry and devotion to duty. He has shown great courage and determination on many occasions, repeatedly repairing wires under very heavy fire,”

He was later granted a wartime commission and went on to win the Military Cross announced in the London Gazettes dated 11th January 1919:

“For conspicuous gallantry and devotion to duty. When all the officers of the battery were wounded this officer took command and, assisted by two new officers, led it with great success, moving several times and on each occasion coming quickly into action again in well selected positions. A few days later, during a pause in a covering barrage, he made a forward reconnaissance and led his battery to a better position for re-commencing the barrage.”