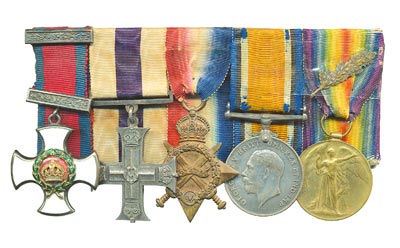 William Joseph Lloyd enlisted in the Duke of Lancaster’s Own Yeomanry as a trooper, service number 3433 and arrived in France on 28th August 1915 with this unit. He was commissioned in the 7th Lancashire Fusiliers on the 26th March 1918 and subsequently attached to the 5th Battalion West Riding Regiment.

The DSO and MC were both announced in the London Gazette dated 1st February 1919.

The DSO was awarded “For great personal bravery and gallant leadership against .... (Havrincourt) and the Hindenburg Line between September 12th and 15th 1918, particularly on the 13th, when he was placed in charge of a bombing attack on the Hindenburg Line. The attack was held up by a close range machine gun fire which enfiladed a gap in the trench where the latter crosses a sunk road. Six of his men and another officer were killed in attempting to cross and there was momentary disorganisation. He at once rallied the attacking party and continued the advance, himself crossing and re-crossing the gap, several times and taking the greatest personal risks in order to encourage his men. He then led the attack up the trench, overcame the enemy resistance, capturing the objective, over twenty prisoners and a machine gun. In spite of the fact that a pocket of the enemy were in the rear and he was heavily counter-attacked, he held on to his position throughout the day thus enabling other attacks to succeed and the battalion objective to be gained. The very fine example of personal bravery exhibited by this officer, combined with good leadership, was largely responsible for the success of operations.”

The extended MC citation “For dashing leadership and great bravery during the operations resulting in the capture of the Crossings of Canal ...... (D’Escault). He forced the Crossings, and his great dash and fearless example quickly got his company across, he personally superintending the Crossing under heavy machine gun and shell fire. During the evening of the 28th September he led his Company in an attack on the German trenches, which were held by greatly superior numbers of the enemy. Here he was surrounded and cut off, with nine men from his Company. He at once ordered a charge, drove in thirty of the enemy as prisoners. At the same time an enemy counter-attack was launched on the left flank of the battalion, but his promptitude in organizing the available reserves and the gallant leading of this officer saved a dangerous situation and beat off the attack.”

He was Mentioned in Field Marshall Haig’s dispatches in the London Gazette dated 16th March 1919.

He was promoted Acting Captain from commanding a Company on 10th November 1918. He was later granted temporary Captain for service with King’s African Rifles on the 4th February 1925.